I Didn't Write That!
15 December 2022
Elon Finally Gives Me My Excuse to Leave Twitter
Here is a tweet about Trump and how he's full of shit and not to be feared as he wants to be. The context was Raw Story running yet another stupid scare story about Trump and the threat he poses. Yes, of course he does, but only insofar as we give him that power at this point.
Right media sucks Trump's cock, but left media gets outrage clicks.

In my view Trump should just now be left to the wolves, to be torn apart by the legal system for his many, many, many crimes, Jan. 6 just being the worst but definitely a bunch of crimes by itself; with no GOP to shield him. When I said he should be slapped I mean he should be humiliated for real, hard, and he'll crumble like any bully. After all the loss he caused for the GOP only the hardest core crazies want to save his ass anymore. But we should stop letting him scare us. That's what I was saying.

This got my Twitter account locked, for 7 days.
So, since I've been considering it anyway as Musk is torturing the platform to death, I deactivated it. You can find me instead on Mastodon. (and the usual other places that have not been Musked)
Fuck Elon Musk. I am NOT sorry. 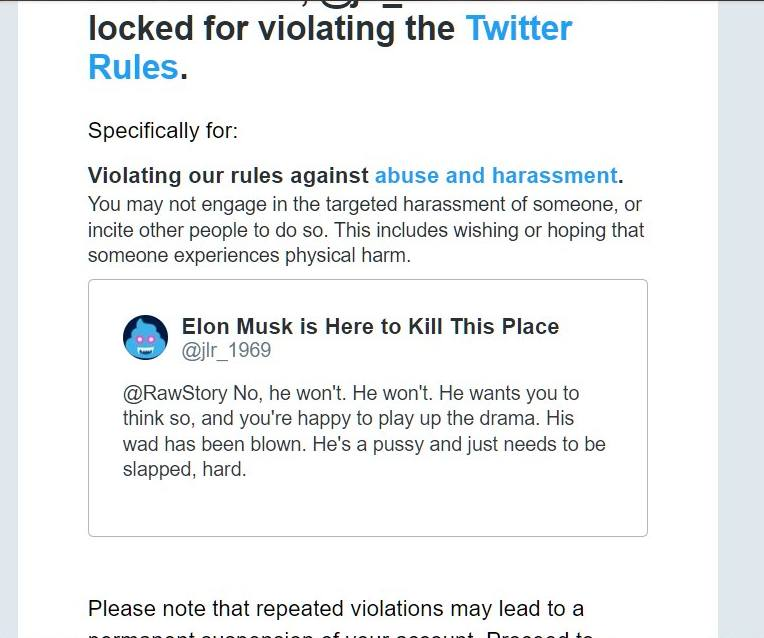