SO...Elon Musk has paid $43 billion to buy Twitter outright, with the intent of making it his own private company. Or rather, plaything. He says he plans to bring back free speech there.
What can this amount to? Not sure. I'm just talking here about how I feel about it. 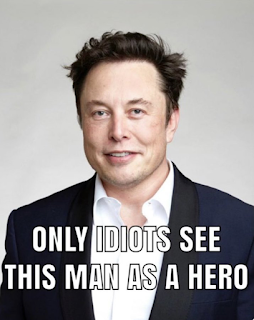 The consequence, though, is certainly that he's going to let all the racist, misogynist crazies who have been banned from the site back on, and why would you do that unless you also planned to let them resume their vicious activities--or at least simply do nothing to stop anything? This is a guy who thought he had the right to (based on nothing but spite) slander someone as a pedo. He intends Twitter to be answerable to no one but him, and one can assume that this means he will use it as a way of pumping and dumping Tesla and other stocks, and to promote Tesla and SpaceX, but otherwise he'll probably not have it moderated at all.
He also says he plans to take it away from the ad-supported model. Does he intend then for it to become a subscription service, or for it to generate no money at all? But the reason why Twitter even has any importance is because of the amount of money it generates, and that is through advertising. It's this that also makes it worth the attention--and ad money--of corporations, and why Twitter is treated as such a serious thing and all other similar platforms, even harmless ones like Mastodon, might as well not exist. If not for that, it becomes the world's biggest Delphi Forum. If Musk also helps it become Gab, then it will end up with no real currency whatsoever, just a sludgepit most people won't want to visit.