I Didn't Write That!
03 October 2019
Trump Will Take Pence With Him

When the criminal part is operant, you could say Trump has a kind of high cunning. Like any good mobster, he knew to get Mikey to dip his hands in the blood too. 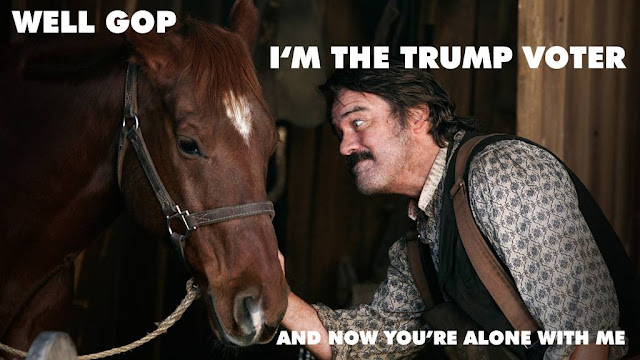 Really clever of Trump to taint the GOP's backup Normal Republican this way. He ensured Pence was part of the same plot, so they don't dare help impeach unless they're willing to lose the whole office.

To Nancy Pelosi. Who's in the line of succession after Pence.

Seriously, if they'd had any sense they'd have at least made sure Pence was involved in no Trump decisions at all. Otherwise, what was the point of him?

I'm guessing that once they got one more Supreme Court Justice, and the country softened for the GOP by all of Trump's draconian policies, they'd have cut him loose to have Pence with a country made easy for him by the sacrificial Trump.

I think that was the hope.

And then they'd say Trump was never a real Republican at all. They managed to muddle the memory of Dubya fairly well, why not him?

But we saw them, how they are when they fear no loss of power for making America suffer; how much they enjoy the permission Trump gives them, and how little they ever meant their crowd-controlling talk of their perverse 50s view of Christian morality they themselves would never follow. And we will not forget.