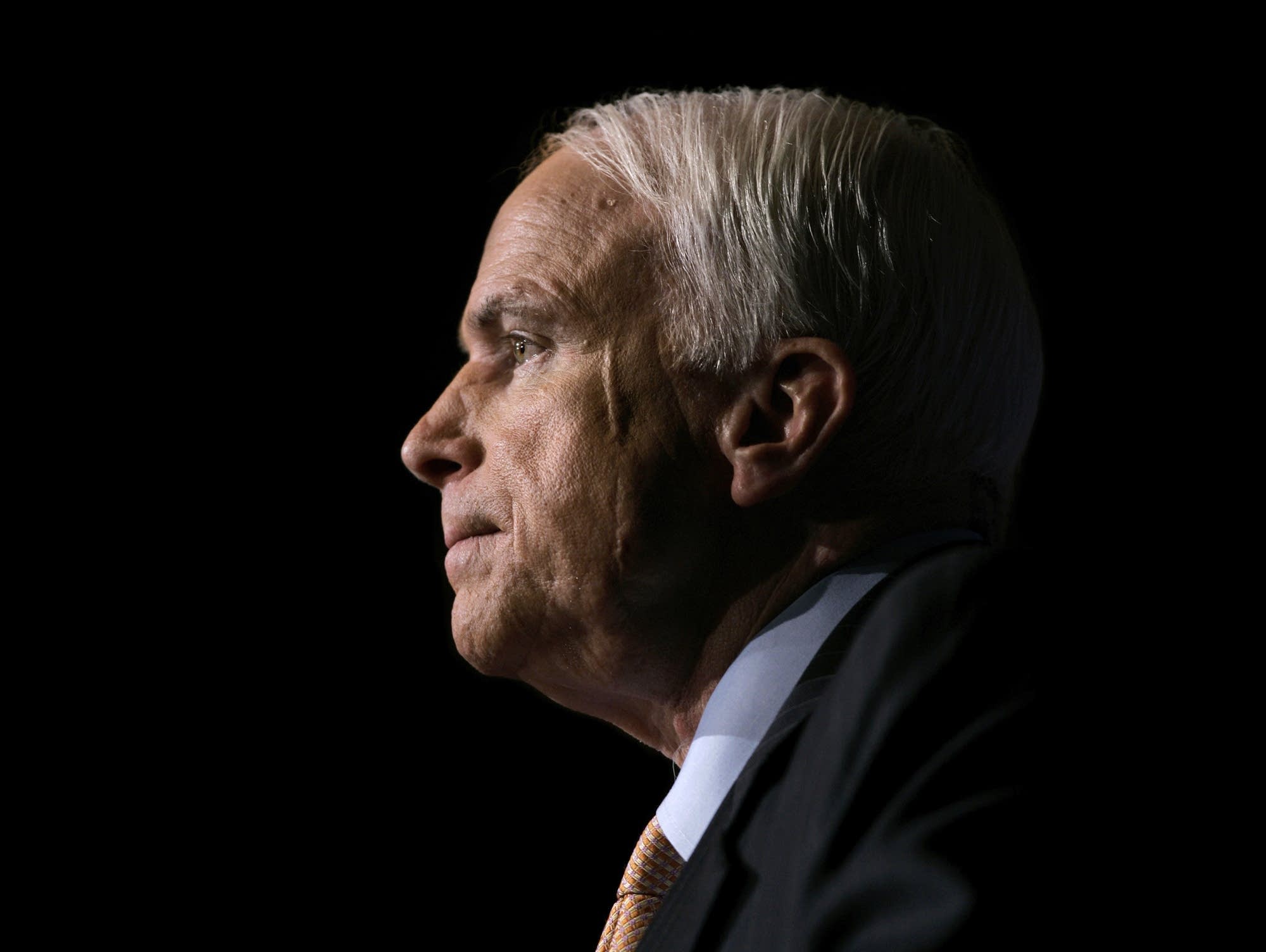 John McCain died yesterday, and is being lauded as the last example of decency left in the Republican party. It's actually just a continuation of the image the GOP always tried to put forth of him, papering over the many bad things he was responsible for regardless.

You have to wonder anyway about a party that constantly has to point to one guy and say, "SEE! One of us DOES have a sense of decency!" The same party has to go back to 1865 to find an example of the last time they helped black people. It has a smell of good cop/bad cop about it as well.

McCain was always the good cop. At no time was this more true than the 2008 election, where he, and Steve Schmidt, picked Sarah Palin as running mate in the campaign against Barack Obama. And of course the GOP wanted to use racism against the first black presidential nominee. But McCain didn't like that, and it would have harmed his image with the press. In addition, the core of the GOP base did not like McCain because he was not right-wing enough, at least not domestically (though abroad, he'd happily have bombed anyone).

But did he abandon such a strategy? No. He just let Palin do it instead. 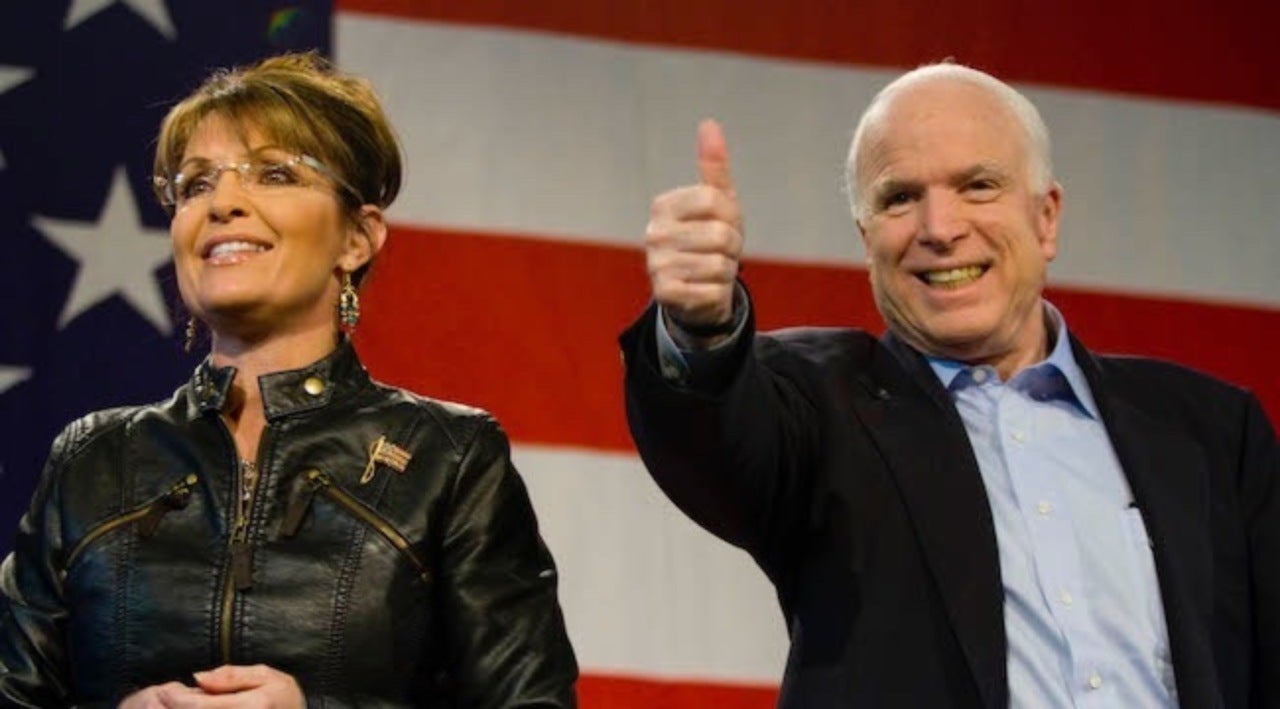 So she delivered speech after speech claiming he wasn't born here, going on about his birth certificate and death panels, and in general, seeding every single piece of garbage said about Obama since.

Meanwhile, McCain got to keep appearing decent and above it all and still loved by the press, as though this were not his running mate, and as though he had no control of said running mate, like two parallel presidential candidates. It got to the point that people forgot McCain was the one at the top of the ticket; Palin got most of the publicity and absorbed much of the attacks, and even those only increased her profile.

How often is it true that the running mate is higher-profile than the actual candidate? At the time it was widely assumed that the GOP actually did think of her as the top of the ticket and hoped McCain would die soon after assuming office, making her, their perfect catspaw, president. (Eventually, of course, they got their catspaw, if not her) Do you remember who SNL had playing McCain? No? Bet you know who played Palin.

So who mattered that year?

The Trump wing began as the Palin wing.

Palin began as a national figure because of the supposed moderate. One could argue that calling him a moderate then becomes beside the point, because McCain opened the Pandora's Box of raw fascism. it doesn't matter whether he believed it himself. His breaking it wide on the national stage was the best support it could have gotten.

McCain somehow got to keep his reputation despite having done this. People have been constantly sharing this clip as an example of his decency. And granted, even this is more decent, in intent if not execution, than one would expect of any Republican now, but that's only a sign of how depraved they are, not how decent McCain was.


With the passing of John McCain, we have lost a bastion of integrity and statesmanship. In a time of hatefulness and deceit, he renewed our sense of honor and decency. America has lost a good man. pic.twitter.com/4WYrmUOU4x
— Robert Reich (@RBReich) August 26, 2018

Everyone forgets that moment wouldn't have happened if he hadn't picked Sarah Palin, who was happily spewing this shit before AND after this.

He was so desperate to win he didn't drop her ass the minute she talked like this, and that's because this was good cop/bad cop. The GOP wanted to press on this aspect as it was a black candidate, but McCain didn't want to soil himself. So they had HER do it.

He never apologized for this. At best his attitude about this was a sort of "Whoops."

This is not a whoops.

So this bullshit about his decency means nothing when you look at the damage he actually caused. He STARTED the Hell we're in. McCain had a hell of a lot to atone for, folks. The LEAST he could do was go against Trump.

I wish I could say something nice about him. But I cannot forgive him for opening the door to the racist Hell we now live in. If you open the door willingly for evil, then, you're evil too.

Trump is utter shit. But McCain was an example of how the GOP could happily ally with utter shit no matter what their personal character might be, just to get elected. Character only matters at crucial moments and McCain failed his country at the end. True, he did what he could to resist, but when it was far, far too late.

He also perfected the tradition Jeff Flake carries on, of a self-righteous, indignant speech bemoaning the loss of decency in the GOP that saves your reputation when you vote for the thing anyway. Yeah, McCain did vote the good way on killing the ACA, but he also voted to chip away at it otherwise, when you weren't looking.

I'm sorry. I am not happy he's dead, and feel badly for his family, but cannot mourn him.