UPDATE: Read what Desert Peach and Afterdead creator Donna Barr had to say on this matter. Also go to bottom to see another update: the PRINT comics may go soon too. 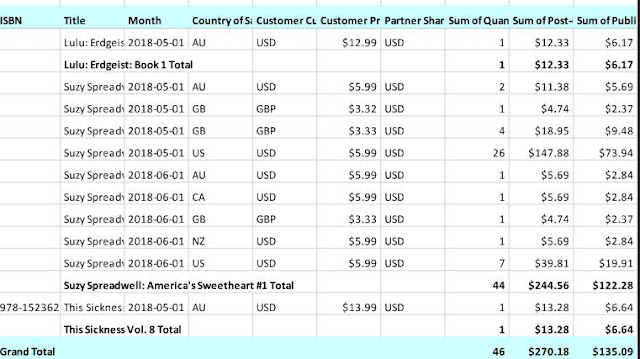 A report that Comixology sent me today, to be cruel, I guess. It appears my sales, which are not huge, were picking up a lot in the last two months, especially after SUZY SPREADWELL was approved and released. Which I waited for a year, because Comixology are appallingly slow about that process. (Forget releasing digitally same day as print if you're small) Something I hate but I put up with.

And I've been on Comixology for a number of years, starting with LULU Book 1. All the books went through this same long approval process. Some of the older stuff, like VLADRUSHKA or MARTHA, they rejected because it was too explicit. But that was all. They didn't ban me for submitting them. And in order to make ebook and POD platforms happy, because as it's not a goddamn hobby, I want to get my comics to the marketplace, I have toned and toned down my work for the past decade, as all of you must have noticed. It wasn't because I want to. It was because I had to.

You see, if you're a tiny self-publishing company, they exercise arbitrary standards they would never use against bigger companies like Image (they carry the incredibly filthy BLACK KISS by Chaykin, and they should), NBM (Crepax' STORY OF O, again something that should be available), or Avatar (CROSSED, which is about rape zombies. This one I wouldn't mind seeing erased from the earth). They can release any content they like through Comixology. But someone like me has to be careful.

So I have, because I did not want to get banned again as happened with Cafepress or, temporarily(till people made noise about it, and the stuff is back there and you can buy it at the link), Google Play. No matter how angry it made me to have to do so. My work is basically an R rating now.

And yet, barely a couple of months after they approved SUZY, they banned me. All my books, just like that.They never explained the reason why to me. They made me feel like trash.

And the books were selling, finally.

How would you feel if every time you achieved something, someone else came in afterward and nullified it? How much would you hate those people?

It seems this always happens the instant they start to sell, the instant I get any traction whatsoever. I sacrifice my entire life to making this stuff. I spend months finishing a story, because I have to also have a day job. I'm exhausted. I'm lonely. I'm bored. I barely feel human. My only recompense is knowing a work has been completed and is available.

What usually happens, at Cafepress, Google Play, and now Comixology, the instant a comic or comics of mine start to sell, though, is one of two things or both:

2. The two standards for self-publishers vs. "proper" publishers that Comixology blatantly and shamelessly goes by.

I don't see other cartoonists being treated this way.

It makes me not want to make anything.

And I'm alone and no one else is complaining to Comixology about this, so they don't think they even have to talk to me.

If you're reading this, please share this all over social media. I'm sick of putting up with this, and intend to make an obnoxious noise to embarrass Comixology about this. I am sick to death of being prevented from succeeding when content far, far more racy than my own is allowed to be sold. I have never faced this when I had a publisher. As I have none right now but me, I'm easy to bully.

I have no idea what's special about my stuff that I keep being singled out. But I would really like some help this time.

Sorry if I sound whiny, but I'm pissed. Really pissed. I liked working with Comixology, so their disrespectful treatment of me all of a sudden hurts. I've been doing this over two decades, haven't had a bad review since 1998, but I still get treated as a hobbyist because I try to do all of it myself.

And by the way, as you may imagine, this makes a pledge at Patreon even more welcome, so if you can, please do at any amount, and thanks.

Got my last royalties from @comixology, and they were substantial, the highest 2 mo I ever had, and it was mostly due to SUZY. Which they made me wait a yr to approve because they're very slow.
Only logical they banned me at that moment. Wouldn't want me to succeed or anything
— John Roberson (@jlr_1969) August 19, 2018

YET ANOTHER UPDATE: Comixology and Createspace are both treating me like trash and not responding to my messages, and when I call I end up on endless holds that cut off halfway through. So if you're a small publisher, this is how they treat you when there's a problem, now that they're part of Kindle. Other creators, be warned.

And why Createspace? Why, because they're about to be folded into Kindle too. So my books there, my print books, will soon be banned as well. I intend to fight this. But if you were waiting to buy them, better do it now because they may soon be gone.