I Didn't Write That!
28 July 2017
McCain & the Healthcare Vote Implosion


I thought McCain was a bastard to let the vote go forward. But he did say at the time he would not vote in favor of it just the same, and Murkowski and Collins were already known to be firmly against this. Of course they could not resist going straight for it and getting drunk with potential blood, because they don't just want the tax cut; they don't just want to get rid of an entitlement, or just Obama's legacy. 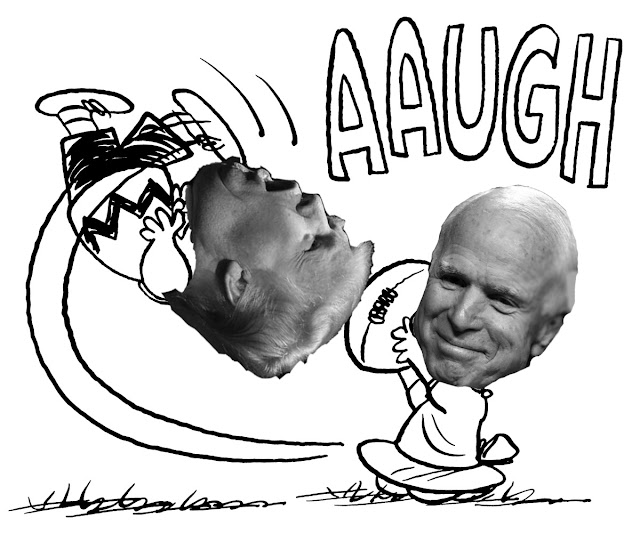 Their ever-more-open sadism about their intent, Trump included, indicated they actually want to punish Americans for ever accepting an entitlement. Whether lesson-teaching "for their own good," or just simple cruelty, they really did want this to hurt, and could not wait. Other Republicans were lukewarm but happy to let it go forward, so functionally are no less bastards.

So McCain lets all the poison that lurks in the mud hatch out. But knows all that is needed is to let them burn themselves out. They knew they no longer had any momentum, it was now or never.

And then he fucked them good and hard anyway, because he knows he's going to die, and he had to at least make up for Sarah Palin somehow.

I still think he's a snake, but this time that was a good thing.

Every day this was drawn out brought real distress to vulnerable people. Never forgive those who let that happen. https://t.co/Ye20HLBU8k
— David Klion (@DavidKlion) July 28, 2017

I'm not happy. I'm angry that we spent months on the brink of what never should have been considered. I'm angry that these people have power
— David Klion (@DavidKlion) July 28, 2017

As we tweet, President Trump is punching tiny holes in the walls of the Oval Office while The Mooch looks on saying, "Huge hole, sir. Nice!"
— Rex Huppke (@RexHuppke) July 28, 2017

In the end, the president's closing message – that his attorney general is terrible – couldn't put the bill over the top
— Alex Burns (@alexburnsNYT) July 28, 2017