I will be announcing my decision on Paris Accord, Thursday at 3:00 P.M. The White House Rose Garden. MAKE AMERICA GREAT AGAIN!
— Donald J. Trump (@realDonaldTrump) June 1, 2017

Why put my response in words? Here instead:

Glad I don't have any children, myself. Sorry if you do, because they will all suffer horribly in the world this will leave them. The GOP certainly doesn't give a damn about the children they want to force into the world.

But that's obvious, so it's a cliche, so it must not matter. Anyway, we're only talking two more generations.


Tomorrow I'll wake up in time to see the stupidest world leader EVER decide the fate of the planet.

Only now does the Republican Party understand what eight years of building a party based entirely on opposition to not only the president, but the government itself and every concept of governing as understood by civilization, will do.

Only now do they realize they have no one left who knows what they're doing. And that they still have to make the government function, because they have no idea what to replace it with.

Only now does their bluff explode in their faces, but may also do so in ours as well. 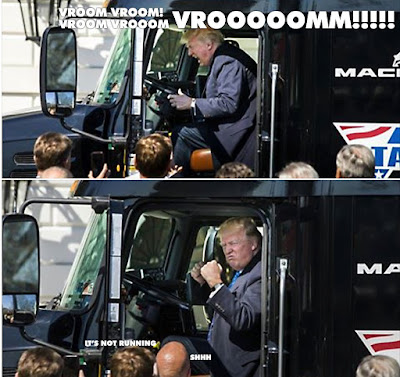 Rats know when a ship is sinking.

Trump betrays his communications staff every time he opens his mouth; it is clearly impossible for them to build anything like credibility with the media, who are now quite conditioned to spot lies from this administration, as it can always be assumed that's their first resort.

If someone said to Trump, "Isn't it true you're just not smart enough to have plotted with Russia?" Trump would not only instantly admit everything, he would brag.

If you stay at this White House one moment longer now, your risk of being indicted grows.

Given all this, why wouldn't Trump's staff quit?

29 May 2017
New Suzy Spreadwell at @MartianLit: No Peeking + Some New Naughty Art

It's Monday, there's more! Click here to see Greg being a perfect gentleman. 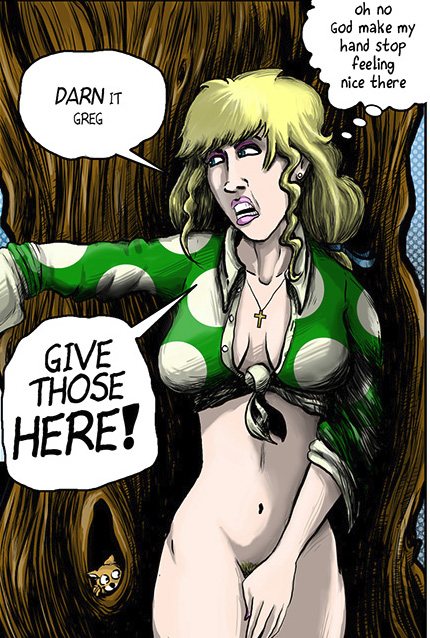 First of all, I saw the first 4 episodes of the new TWIN PEAKS last night and loved it and look forward to seeing more. I cannot describe it, but that's what's so great about it. 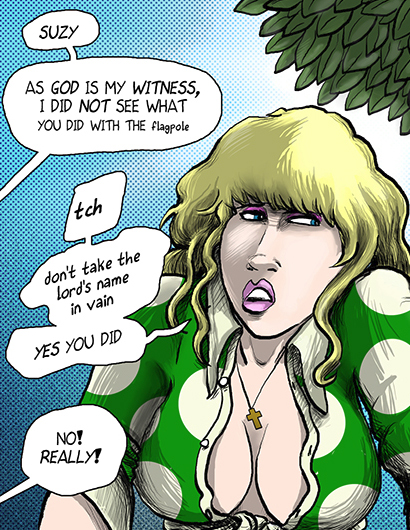 And here's this week's SUZY at Martian Lit!
Her boyfriend Greg, trying his best to find the best way tell her...well...

15 May 2017
New Suzy Spreadwell @MartianLit: Perhaps She Could Use A Ride

Here's this week's page of Suzy, in which we meet her very nice boyfriend Greg, who has nothing in mind but help. Click here for more! 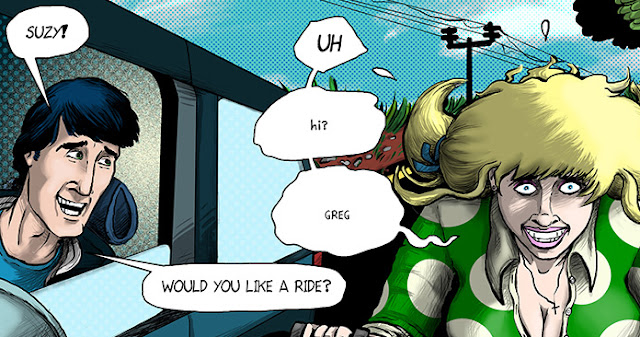 Catch up on the chapter so far at the permalink here, and read chapter 1 in print at Amazon and digital at Comixology & Google Play! And to see the whole chapter (12 pages and more coming shortly) plus much more right now, why not give a mere $5 (or more if inclined) at Patreon to support this and other weird comics by myself.

No update here last week because I was too busy with a move of Bottomless Studio, which is now, happily, done. But here was last week's Suzy at MartianLit if you missed it, continuing her parents' conversation about Lot and Sodom, started here.

And now, here's this week, where we return to Suzy herself, and her frantic bicycle ride home following the events from chapter 1(which you can read here in print and here in digital). Were they events? Did they happen? And when will she notice she forgot her shorts? Click image to find out more...

Don't forget to support this and my other work (like LULU) by giving a small pledge of a mere $5 (or more) at Patreon. Which also entitles you to see the finished pages of this and other works months before the general public, and other goodies. All for the cost of a coffee! Find out more here.