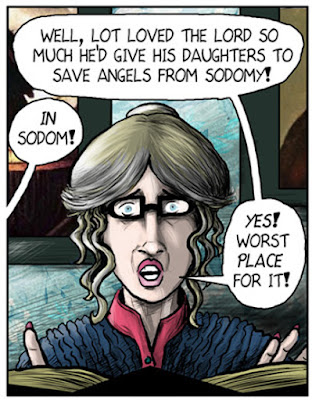 Your wait for more of America's Sweetheart is over!

The public premiere of chapter 2 of SUZY SPREADWELL has begun at Martian Lit and will run each Monday. Click here for page 1, where we meet Suzy's parents!

Or if you can't wait, read the entire chapter now for only a $5 pledge supporting my work (which unlocks a lot more as well) today!

And of course, chapter 1 is available now in THIS SICKNESS #8 at Amazon(print & Kindle), Comixology, and Google Play (digital).

So much for this delusion that Google Play wised up; once again they banned VLADRUSHKA, STORY OF OH, and MARTHA, the last of which is available at Amazon and has been a while. 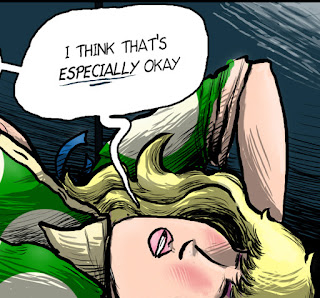 Yep! The newest Suzy Spreadwell page, freshly finished (Chapter 2, p. 11) is posted at Patreon, and for a mere $5 pledge you can read it, all the chapter to date, and all future pages well in advance of everyone else, as they're finished. A mere 5 bucks (which is full access to everything) is all it takes. Pledge now!

Read chapter 1 here and in THIS SICKNESS #8, available in print (and Kindle) at Amazon, and in digital at Comixology & Google Play!

Speaking of Google Play, great news there: I have won one part of my censorship fight. Because you can also find LULU Book 1 restored. Apparently Vladrushka remains banned because Google Play likes zombie rape (all of CROSSED is available there) better than sex.
___________________

A live reading of James Snowden's "Koba's Bad Cut," performed by me at Faire Gallery & Cafe and introduced by Mr. Snowden, in Seattle, Aug. 17, 2009 for the McCroskey Memorial Internet Playhouse. Yes, that's supposed to be a Russian accent I was asked to perform it in, something I learned actually when I was in YOU CAN'T TAKE IT WITH YOU in high school as Mr. Kolenkhov, the Russian ballet teacher. You judge how accurate it is...I'm not sure it's so good. But the story is great!

Update: And now you can also buy the story here in the MAKE X anthology.
Read more »

Labels: it's all about ME, my performances, Russia, seattle