I Didn't Write That!
15 February 2016
New UNCLE CYRUS @MartianLit: What To Never Say To An Editor + New Suzy Sketch

New UNCLE CYRUS today at Martian Lit to school you young punks in the proper protocol with editors. Click image for whole page.

The whole story, along with LULU, SUZY SPREADWELL, and excellent work by seven other creators, in color and black & white, now available at Amazon in print & kindle, and in digital also at Google Play Books. Also, a surprise after the break below... 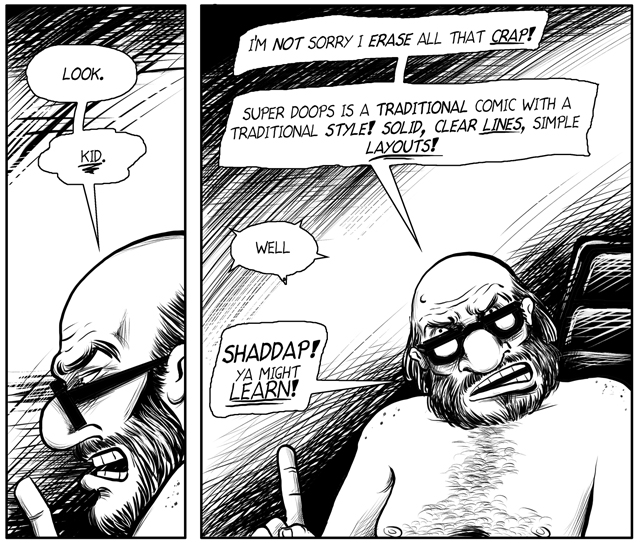 ...And down here are what I was doing last night: Two stages of a new SUZY SPREADWELL drawing, as I prepare to draw the next chapter. Both in Manga Studio. I inked all of the new UNCLE CYRUS in it, and now I'm playing with penciling in it as well. Normally I do analog pencils, on a drawing board, and then scan them and ink digitally. I used to use Photoshop for that, but Manga Studio

turns out to be a lot more natural in its inks and I highly recommend it as far as that goes. Unsure what I think of the pencils so far; there's always that artificial feeling of drawing on smooth plastic that seems more appropriate to inking than pencils. I like the bite of the paper and the indefinable gradations of the pencil. On the other hand, my eyes are terrible now and this was easier to see.

Anyway, first one below is "pencils," and the second its "inks," with color to follow. And she's doing something you've seen her doing far less subtly before. In the first, she's nude, and clothes are added after because we don't want the censors unhappy now do we. So that's a great reason for using a method where all stages are saved!

Also, did you miss Julian Darius' in-depth interview with me at Sequart last week? Here's part 1, and here's part 2!