This week's LULU. And the last page of this chapter. A day late, but yesterday was my birthday, so eh. Click image for full page.

And how did I spend the last two or so weeks? Assembling THIS SICKNESS #8, which will be 100 pages and very diverse stuff, with, aptly, 8 contributors, though that was accidental.

Here's the cover minus text, except on the spine. Art by Molly Kiely(front) & Duong T.P.Hang(back) 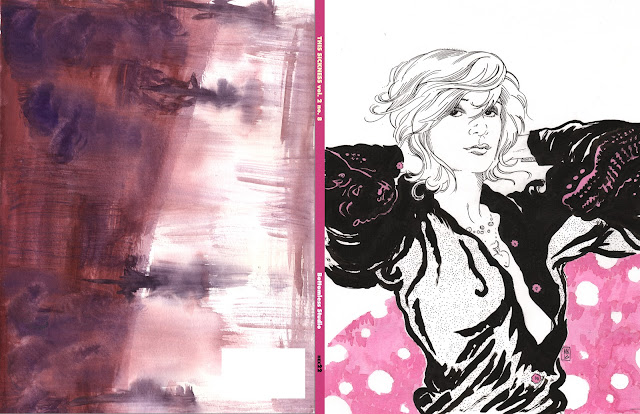 Other contributions include lots and lots of comics by myself(including for the first time some in color--my stuff includes LULU, UNCLE CYRUS, SUZY SPREADWELL, my version of "Strange Fruit" from GRAPHIC CANON and a few other items), artwork by Emily Kaplan (in the first extensive collection of her magnificent and numerous paintings), poetry by Chad Parenteau, a new short story by Chris Dewildt(with illo by me), and more illustrations, by newcomer Gianna Ratto. As well as a new cartoon written by Charles Alverson and drawn by me.

If you're wondering about the "hex21" thing on the spine--just an informal numbering system like Craig Russell's "Opus" or Trent Reznor's "Halo" systems. This will be the 22nd thing I've published. This is including the books TRADE and VLADRUSHKA 1, which did have a small amount of printing till Createspace "suppressed" them. (literally, that's how it was put on my dashboard) The "hex" is an I Ching reference.*


Oh, and don't go looking for this at your dealer--though inquire, because if they deal with Ingrams they may be able to order it once it's released, as I now have the channels open to sell direct to bookstores and libraries. THIS SICKNESS #8 will be available only at Amazon, but may also be at Comixology soon after(as LULU Book 1 is now). And maybe through the new Shop feature at Facebook as well. (where I already have a couple of items for sale) I will post updates as we get closer to the launch.


HEX 9
WORKING FOR THE MAN (2003, e-book, available for free download at jlroberson.org)