I Didn't Write That!
31 August 2015
HANNIBAL: Magnificent But Some Minor Quibbles (Spoilers Maybe)

So often it's the case: when I discover something wonderful, if it's still current, it soon dies. 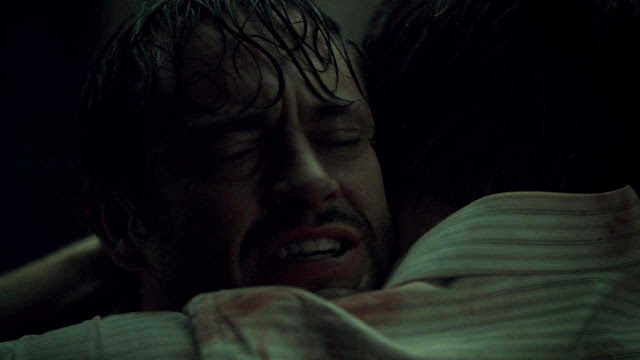 I came to HANNIBAL as it was entering its final season, and fell in love with it rather quickly. Just the same, I'm glad in some ways it was cancelled: it seemed to free Bryan Fuller to really go all the way with no fear of ruining characters he might need later, culminating in one of the most perfect conclusions I think I've ever seen on a network show.

The show, pun intended, had guts. It pushed limits not just in content but even more in emotional intensity (I'd say it rivals TWIN PEAKS for that) and throughout its run seems to have been a taunt to almost every other network show that this is how good TV can be. And overall, I like this show's treatment of Harris' concepts better than every other one--including Harris' own work.

But that's not to say it's without flaws, so here are a few. (the Siouxsie song that popped up by surprise in the final episode, her first in 8 years, is not one of those)

I think my only beef with the show is illustrated by the lack of backstory for Francis Dolarhyde/the Red Dragon, which is puzzling given that he has a lot of backstory in RED DRAGON, more than Hannibal himself. He's a complex and somewhat difficult character that makes no sense if you don't know about the abuse he suffered at his grandma's hands throughout his childhood. Instead, we only know he had a harelip which left a scar, and that's supposed to be enough to explain why he'd go that crazy. We see him twisting and going mad in his room alone but we have no backstory. So he's a very scary killer, but still just a killer, like a monster, like a vampire or something.

This is always a danger inherent in Harris' material, and you could argue this is a central flaw of the series (and really, this goes all the way back to SILENCE OF THE LAMBS), that serial killers are like supervillains, that somehow their madness gives them superpowers, that it's like some cult or philosophy.

Instead of saying this is a fractured person with something missing, in this case because of torment and abuse that made him a monster. Without that you lose complexity. As was emphasized in one of the oldest adaptations of this cycle.

In MANHUNTER we see Graham unstable, vulnerable. But we also see him able to compartmentalize it. As a child, he feels badly for him: someone took an innocent child and turned them into a monster, he says.

As an adult he despises him: he kills whole families to feed puerile fantasies. And Graham can hold on to the need to act with that. We see him absorb it and then throw it off once it's getting too deep. He runs away from Lecter when that creeps in.

Not this Will, who I actually still like a lot and find fascinating. He's like an open wound, all the time. He seems to have no real arc--he just wants to die. He has no will Hannibal does not impart to him. Out of love and pity.

I may though just be describing it, not criticizing it. Because it works, anyway. And oh my god, that epilogue.

(note: the seed of this was a conversation with Jesse Baker)