I Didn't Write That!
20 October 2013
The GOP and the True Believers
A thought or two on the shutdown humiliation of the GOP, which is a textbook example of what "give 'em enough rope" means:

There has, in the past, usually been a difference between what the GOP actually wants, and what it is willing to use.

What the GOP believed in was power and money, and the status quo of a particular class. All the things it used--racism, nationalism, xenophobia--are tools. They always are. They would use the religious right, for instance, but rarely actually deliver for them--and thank god for that. The Southern Strategy was about harnessing those forces, not about belief in them--that's why Goldwater was rejected, because he would have put the True Believer faction in power. It sounds strange to say so, but we should in some ways be grateful the GOP are such hypocrites usually.

That's not the case now. The people who have believed the rhetoric, who think these things are actually the point of the party, have gotten into control. 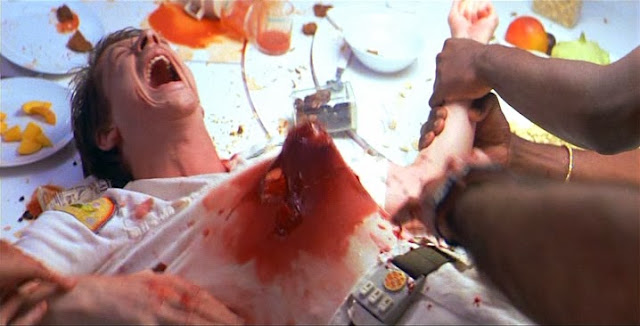 The problem with this is that these people do not believe government should work, mainly because they do not know what government does. Consider the senior citizens a few years ago who protested the government getting involved in their healthcare, and it turned out they didn't know Medicare was the government, or Social Security. This is a similar case. It's unclear if they understand the military too is part of the government they deplore. They think government is This Alien Occupying Force That Only Helps Poor People. So of course they want nothing but to slow it down or stop it. (Fox attempted, laughably, to call it a "slimdown")

Only one has to start realizing--even if one is a Republican--that a party that spends five years running proposing nor passing any useful legislation; pursuing no initiatives; and doing absolutely nothing but attempt to disrupt the government, either by action or by threat; that one has to question whether this is a political party at all. And if it is, just what is their function?

And not just disrupt what they don't like about government--disrupt all of it, in its entirety, and try to destroy the credit of the US as well. One has to ask if they are anything more than in the way.

The GOP grownups have to start considering just how this ensures money or power for them, to allow the crap they say to stoke the base to actually be pursued seriously.

And honestly, after five long years of this bullshit, I suggest many of the rest of us would like to get on with our lives and for the government to be realistic and boring again for a while.
___________________