I Didn't Write That!
28 June 2013
Help Me Help Sunny (UPDATED)
Update: there is no more need to give. Thanks to an overzealous vet who was only supposed to do an x-ray but took it upon himself to do a procedure before I okayed it, Sunny is dead, killed by anesthesia that was too much for her weak little body. Here's a fuller account.

I will write more about her later, when I can tell you the many good things about my dear little baby. Right now I can't. I am enraged.

You might remember my other one. And once again their sickness coincides with my poverty.

My cat Sunny, whom I love dearly, has a lump on her neck that's been developing slowly over the last month or so. Now it's causing her to have breathing and eating problems, and all her habits have changed. She's obviously very ill, and scared. I live in Berkeley, and there is no such thing as an inexpensive vet here, given that she will also need tests to determine what the lump is. And I have no day job currently, and cannot afford to take her.

This cat is my best friend and has seen me through some tough times. She's an unusually smart, polite and sweet cat that I owe a lot, and that usually is very calm and happy. I know that sounds silly and she's just a cat, but that's how I feel. She also used to belong to a friend of mine and so I feel doubly responsible for her. She's something good in the world, and precious to me.
A friend of mine set up this fundraiser page for Sunny. I would appreciate if you would donate however much you can, and share the link. Please go here to find out more, and thank you.

And again, thank you. I'm sorry that I have to ask. It's embarrassing. But it's for her.


Update: though more donations are still welcome because of whatever treatment might follow the tests I do know at present she'll need, the minimum that is needed has been reached and exceeded. Thank you to everyone.

Sunny will be at a vet tomorrow morning. She hasn't gotten any worse in the past few days, fortunately, but she's still terribly thin and weak with no energy, and then there's that awful lump on her neck which is the cause of this.

She's eating and has an appetite but she can't eat much for long because swallowing is uncomfortable for her. I've wet her food to help and that has, but not as much as I'd like.
She's TRYING to do her usual routine and seems frustrated she can't, so I hope that's a good sign, because when cats are...let's say sicker than that, they stop doing anything and try to completely hide.

I hope this is something they can fix. She's been very brave and patient. She's an unusually smart cat, so this is really scaring her, but she's being very good.
Thank you again.

I used this also, you may recall, the day after the election. But: Worth saying again. 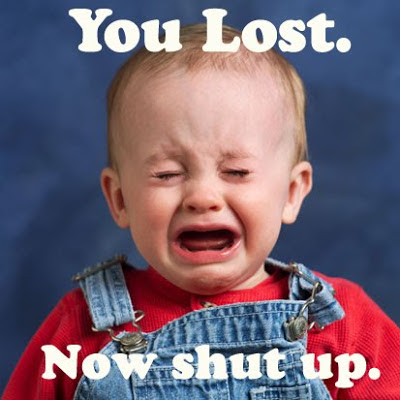 25 June 2013
Fuel for Its Ego: Some Notes on the Self-Contradiction of Rand
Ayn Rand speaks of a world ruled by free choice between free men, but actually envisions a natural master class--which the Rand reader thinks of themselves as belonging to, otherwise they wouldn't have bought a Rand book.

Not everyone is a creator. Nor can be. If everyone is producing, who is consuming? Inevitably you have everyone else dependent upon this master class. And that's a situation of free choice? It is interesting how Rand ignores the entire issue of power in this respect.

Emphasized by her fantasy of this master class, in that beloved, bestselling sofa leg ATLAS SHRUGGED, leaving and effectively extorting the entire world by starving it. That's not force? Or Howard Roark in THE FOUNTAINHEAD blowing up a low income housing development he ghost-designed because the balcony redesigns piss him off. (by the way, it's concerning that where you find the only reference to children in Rand's works, and it's a repulsive depiction, wherein the impression is they are part of the despoiling of Roark's grand design) A place specifically for people who have no other place to live. Homeless because of Roark's need for appreciation.

Back to ATLAS: To know the world depends on your efforts & then to abandon it, letting it fall apart? That is force. If I starve you, I am forcing you. Nothing but self-contradiction.

Which Rand's infantile excuse for a philosophy that chooses to ignore every complexity in life anyone older than 25 knows, always is. it is a regressive burst of the one who chooses not to grow up or understand nuances or subtlety; willful stupidity of the absolutist. I was a Randian for about six months as an arrogant, angry, reclusive teen who knew absolutely nothing and mistook that for all there is, like any adolescent naturally does, thinking just because they're bigger they're not still children. Believe me when I say it's like crack then, as it is for anyone whose shortcomings it justifies.

This is what Rand says to her reader: You don't have to grow, you don't have to change, you don't have to get past your fear of other people or learn to work with them. You are right. They are wrong. Now think backwards from that premise to find reasons why. Rand's philosophy decides on its result at the outset and cherry-picks reality to "prove" it. Working backwards always, unphilosophically.

"A is A." Her basic principle, cribbed from the often-wrong Aristotle. Something cannot be other than itself. Catchy! But doesn't that beg the question of how you're sure what that thing is--especially if it's you? Or did the reader already make up its mind beforehand, and is simply looking for fuel for its ego? Isn't it really just a form of sophism?

And for Rand's business adherents, it's just a costume for the greedy intentions they always had.

Rand's work is philosophy like a dog's squeeze-toy cheeseburger is food. And who is John Galt? He's just some asshole living in a valley.

For no other reason than I'm bored really. This is more or less in the order they occur to me, unedited, without explanation. And their influence very well may not show at all in my work, though their work is definitely something I am thinking about when doing my own. If you think this is an exercise in lazy narcissism...it is. Meh.

In some cases I've grouped people because it was their specific work together that had an impact and taught me stuff. I have also excluded music and mostly focused on narrative artists or those dealing with narrative. If I included music, as you may well think, this would go on forever.


Labels: comics, film, greenaway, it's all about ME, ken russell, my art, my comics, my influences, my writings

06 June 2013
The NSA Prism Scandal: No Shit, Sherlock
I guess my reaction to the NSA Prism thing is: of course they did. Why would you think they wouldn't? But I mean, my first president was Nixon. So it's when this kind of thing isn't done that I'm shocked.

"Hi, I'm the government. What, you're putting all your information where it's only my sense of decency that keeps me from it? Well."

"Hi, I'm the US public, and I think I could CERTAINLY do something about it if the government wanted to gather info on me."

I'm not Alex Jones (Christ no), but I also operate under the assumption that power will do what power wants. It doesn't have to be a conspiracy. It can just be daily business. And that's true of all governments, and always has been. We have lived under a species of totalitarianism since the Cold War. We don't notice it because we have this strange belief that totalitarianism is incompatible with communication & entertainment. We think it looks like North Korea, or like 1984.

That's what it looks like on a budget, done by incompetents that can do no more than brutalize. Those are amateurs and bullies who don't need to understand the nuances of power, because they do not have the resources for them to apply. They cannot choose when to exercise the more brutal aspects of their state so they do so all the time. And the energy it takes to exert that level of direct control wastes resources that could go to something more productive, and this is why states like that fail eventually.

Our government has the luxury of choosing when, and more exactitude in sifting information.

We don't live in fascism--we don't have to. We babble freely and they listen. We accept it so completely we don't have a word for it.

Let me ask you this if you think you ever had any say in what your government does: when did they ask you whether we should go to war with Iraq, and what part did the US public's opinion play in that? That's just one example. You live in a world now where the government has authority to kill you at will with flying robots, and you think they wouldn't look at Facebook posts?

I would have been more surprised had this not been the case.


Labels: i told you so, obama, totalitarianism, USA