A Moment of Cerebus published a very useful speech Dave Sim (who, as I think I've mentioned before, was a very important influence on my work in many ways) gave in Savannah in 1995.

These were some of the words, which I believe were first reprinted in Sim's GUIDE TO SELF-PUBLISHING, that drove me to making comics back in 1997. So I share them with you.

But this passage in particular you, as a creator, should drive home into your brain with a huge hammer.

Be reliable. Whatever they want done, however unreasonable the deadline, push yourself past your perceptions of your own limitations. Build creative muscle instead of feeding the flab of lies, rationalisations and excuses.


Deep down, deep deep down inside of you in the guts of your creative instincts, how do you think you're doing? Are you giving a hundred and ten percent three hundred and sixty-five days a year? Or are you giving seventy-five percent of your best efforts for a period of a week or two and then five or three or NO percent for a month after that? You were sick.

That's a lie and you know it. You had a cold for two days that you stretched into three weeks. Your spine wasn't broken. You had a cold. Draw with one hand and blow your nose with the other.


From the home office in Sioux City, Iowa, here's a list of the top ten lies, rationalizations and excuses.


Number 10: Writer's block or artist's block.This is a failure of will, compounded by fear of failure, centered on laziness. Shut up and draw something.


Number 9: Strategy and development of a concept.Stop doodling in your little sketchpad and produce something useful.


Number8: Recharging your batteries.Failure of will, compounded by fear of failure, centered on laziness as an excuse to read comic books and watch television all day.


Number 7: Communing with other artists.Bitching and whining with other lazy, unproductive people and sharing their lies, rationalisations and excuses as well as a few beers and a joint if any of you are holding.


Number 6: Getting organized.Shifting piles of useless letters, comic books and fanzines from one side of the room to the other, one at a time so you can read them all and avoid doing any drawing.


Number 5: Collaborating.Having someone to talk to after you've read all your comics, about pages you aren't drawing until your television show comes on.


Number 4: Consulting/[Critiquing].Showing the three pages you drew six months ago to the fortieth person and asking them what they think so you won't have to draw the fourth page until Christmas.


Number 2: Heartbreak.Get over it. You will get laid again. There are a lot of fish in the sea, blah blah blah blah. Right now, you're right. No one loves you. Lucky you. Get to work.


And drum roll please---
The Number 1 lie, excuse and rationalisation: Electronic media.Computer games, computer nets, video games, radio, CD players, and the Galactus of electronic media...television. Video games and computer nets are abominable time wasters. They accomplish nothing.  They are the black holes of intellectual and creative life. That giant sucking sound you hear is time and attention disappearing into the ether. Take a short cut and strip mine your frontal lobes by shoving an industrial vacuum cleaner up your nose. 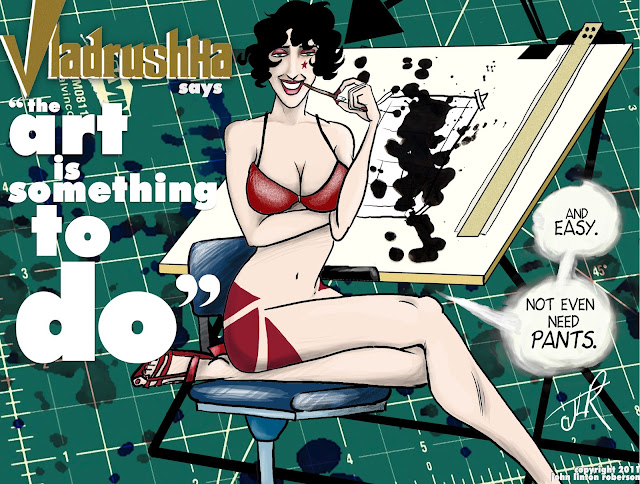