Has there ever been a presidential candidate who whined so much, and so soon, after he lost? His "gracious concession speech"--what a laugh, and how quickly he undid that. After almost salvaging his rep(whatever that is) with that, following a loss for which he only had his own stupid mouth and incompetent campaign to blame, Mitt Romney just can't stop complaining to anyone who will listen that anything but him was responsible for his loss. And not stuff like this. (and this is just SOME of it)

No, it was because Obama bribed voters. It was because voters want "stuff." (you know, like a government that actually meets their needs and runs even a little bit properly, and a president who doesn't constantly call the US a "company") It was because the bad old media made them go through so many debates that one couldn't help but notice how terrible each GOP candidate was; that is his latest whine.

"We had 20 Republican debates, that was absolutely nuts," he said. "It opened us up to gaffes and to material that could be used against us in the general, and we were fighting these debates for a year, and the incumbent president just sat back and laughed."

Most losers have the sense to go away at least for a little while after such humiliation, but not you, oh no, because this is the first time in your whole life you were denied something you wanted. Your entitled attitude was obvious throughout the race, in your impatience at having to actually campaign and debate. You seemed to think that you had been named to the post already and you seemed confused that there was more to becoming president than simply saying you wanted the position. You had no vision, no plan, and no tactical intelligence. You and your campaign kept letting loose with the stupidest statements of cynicism(the "etch-a-sketch" line was only a preview of more giving-away-the-game to come). It wasn't even like you couldn't fool the voters; you didn't even know how. Not once did you give anyone any reason that you should replace Obama, apart that you were white and not him. And best of all, you refused to see it coming. You ignored the real polls and preferred to only look at ones that told you what you wanted to hear, and to listen only to Fox--who in fact do better if Obama is in power rather than a GOP president because otherwise where will the GOP base's resentment that drives the ratings of their political pornography come from?

It's not a puzzlement that you lost. What is a puzzlement is how you ever got as far as you did in the first place. We rejected you. Complaining won't change anything. Suck it up, Mitt, and be a man. Even the GOP is disgusted with you and are trying their best to forget you. I hate to repeat myself, but: 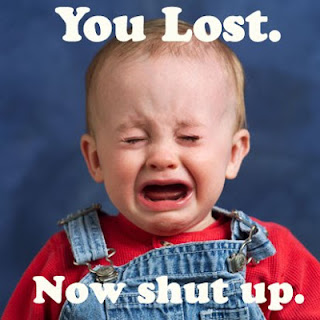