I Didn't Write That!
24 August 2012
HIGH SOCIETY Negatives by Dave Sim Destroyed in Fire: An Appeal to Anyone Who Has Originals (UPDATED) 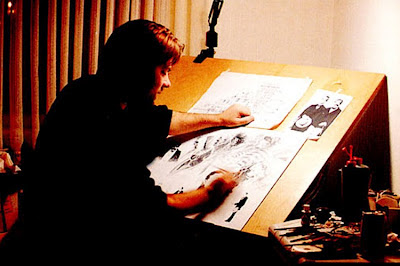 Just about the worst possible news one can imagine of anything that can happen to an artist. Especially one who dedicated his life to a 6,000 page work. The negatives being used to digitize Dave Sim's HIGH SOCIETY were completely destroyed in a fire that consumed the home of the one doing the work(who did get out okay):

"Dave Sim, here: Just thought everyone should know: Fisher came over today and asked if I had heard from Sandeep. No, I hadn't. Hands me today's Record. Front page: Sandeep's place -- and the buildings on either side of him -- were gutted by fire yesterday afternoon. He got out in one piece but with nothing but the clothes on his back and his wallet (he had been in the shower and a cop showed up at the door: "You have the leave. Now") The whole place went up in about five minutes.

All of the negatives for High Society were destroyed as well as the 11x17 scanner and the new negative scanner. No insurance. So, I thought I'd better let everyone know that we're definitely not on track for the September 12 launch at this point.

I don't expect that I'll hear from Sandeep for at least a few days -- he's staying with friends and obviously has a lot more important things to think about than High Society Digital.

Okay -- gotta run to make my 3:00 prayer. Please feel free to relay this to anyone you think should know. Particularly people who are waiting on High Society Digital.

To the youngsters: Dave sold all the pages before scanning was a thing. So the negatives basically WERE the "scans." This means that HIGH SOCIETY cannot be digitized or printed, except from, at best, second-generation copies. Ever again. We're talking 500+ pages of Dave's best-loved work. Indeed, the only reason the negs were not in Dave's hands was because of a Kickstarter campaign to digitize CEREBUS, and it's that HIGH SOCIETY is so loved that it was going first.

This on the heels of his revelation he's in severe financial straits and is giving up comics.

If you are one of those lucky enough to own an original from HIGH SOCIETY, contact these people right now and lend them the art. Or these people as well. Or else HIGH SOCIETY--as anything like what it is--is now dead. Lost forever. Without the negatives a decent quality version cannot be reprinted.

I feel sick just typing this.

UPDATE: A few things. If you have an original, this comment tells you what to do:
"Hi, George Peter Gatsis here... If you ARE considering scanning in an original CEREBUS art page... PLEASE go to this site and read up on the specs. Sincerely, GPG tbdeinc@gmail.com"

Also, there are two benefit auctions for Sandeep, the guy who lost EVERYTHING in the fire, his home and all else:
Reunion at the Regency Print
Cerebus the DJ Print
Now back to the post... 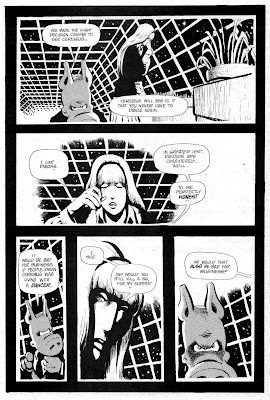 Words don't even cover how horrible this is. His best book (CHURCH & STATE and JAKA'S STORY too, but the energy of HS was IMO the greatest in the whole series, and please, no crap about what happened later. Seriously. This stuff was the Dave we all loved) and one that had, personally, an incalculable influence on my comics, and the fact I even chose to start doing them. For HS, I owe him everything. I would not be doing comics were it not for Dave Sim. Full stop.

And when I started doing VITRIOL, I told him so by letter. He wrote back pleasantly surprised that anyone would go from being a playwright to being a cartoonist. And offered constructive advice. And even redrew a page of VITRIOL (from a copy of PLASTIC 2 I'd sent him) to show me ways I could have approached the layout and things to think about in future.The only pro before him that had taken that time with me was when Michael Bair at a convention personally gave me a lesson in anatomical proportion(a lesson which I use to this day).

I no longer seem to have either that letter or drawing, though I hope in my packing as I keep digging I'll find I'm wrong. Because I want that. But I did just come across this last night and in light of what happened, I post it here. In 1999 when he was doing FALL & THE RIVER, he sent out work sketches on tracing paper he was going to throw away to people who corresponded with him, and I was one of those. This is what he sent me, a sketch of F. Stop(aka F. Scott Fitzgerald) and Jaka. And I cherish it. And I scan & post it here so that it cannot be lost.(click to enlarge) 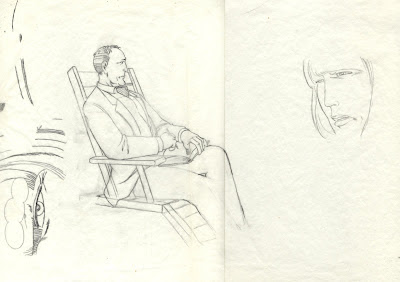 And here is the letter that accompanied the sketch--this one not personal like the one I describe, but I'm assuming the same one went to all his correspondents. 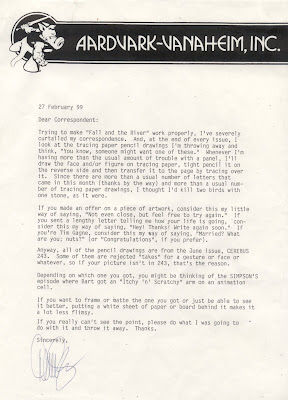 Side note to all cartoonists everywhere: Dave could not scan and back up the art he sold long ago--scanners did not exist then. 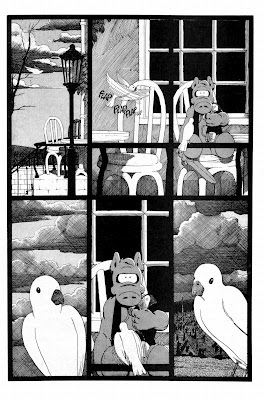 Let this be a lesson. Always scan your art at the highest possible resolution, the instant you finish it, and always, always, always back it up, because YOU CAN. 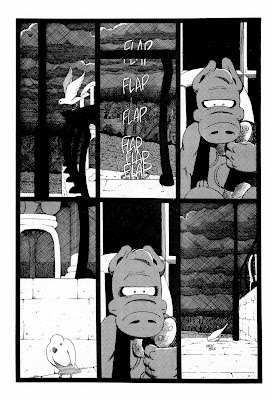 Comments:
If true , this is one of the worst tragedies i have witnessed

If you ARE considering scanning in an original CEREBUS art page... PLEASE go to this site : http://thecerebusartcollection.com/index3.html and read up on the specs.