Right now there's a livestream of the UK about to storm the Ecuador embassy to ostensibly arrest, but most likely kill, Julian Assange. I will be very surprised if it does not end that way. If this was not going to end with the death of Assange, they would not be doing it. You do not create a situation such as this if you do not want to create an opportunity for that.

They find it worth the risk of creating a martyr if they overwhelm you with the EXAMPLE. The eyes of the world are upon it, and they may want that. If it happens, the message of all this will be, "Shut up or we will kill you, in front of the world." This is what it looks like when they stop giving a shit about what anything looks like to you. Even his public arrest will send that message, but the fact is, at this point, it will solve a lot of problems for the UK and the US if he dies. We will see.

And to remind you just how much it matters that you can now see this: my first published cartoon, from Spark-Online in 1999: "The Power of Internet News." Click here(or on image) to enlarge. 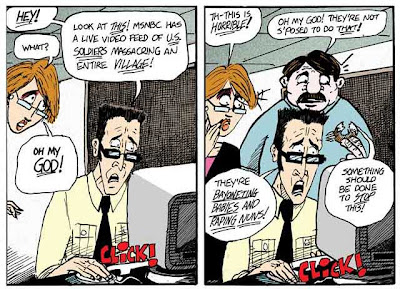 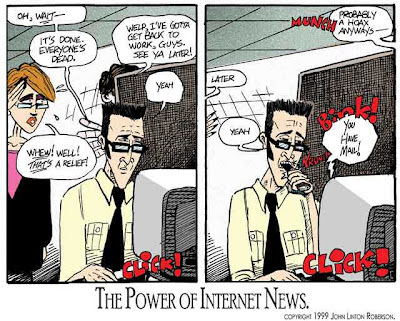 UPDATE: Assange has been granted political asylum in Ecuador. Which means the UK will most likely carry through on their threat to violate Ecuadoran soil, whether at the embassy or in Ecuador itself, or in between because they have said he will not have safe passage out of the country.

Most likely at some point finding a way to kill Assange at the hands of a young, inexperienced police officer who will later be explained to be "jittery."