I Didn't Write That!
22 July 2012
Another Bastard Murders People

And it was him, and him alone, and his freaking evil that made him do it. Not violence in the media. Not a lack of Jesus. Not a left issue, not a right issue. His evil, enabled by easy access to weapons--with NO background checks--that were built for war and have no business in civilian life, killed 12 people, hopefully no more to come among the 72 that were shot, some of whom are still in critical, and my best wishes to all of them and their families.

And any of you using this as yet another excuse for a right-wing/left-wing wrestling match: you are what is wrong with this country. So please just do us all a favor and shut up for once. This is about a bunch of innocent people who were just trying to watch a damn movie, and one complete bastard who had them gathered in a darkened and confined space, and knew with the film's hype it would get attention. That's all.

This country is rotten because of either side's desire to keep using events to score one for the team, and it's not getting better. And it's your fault. Just shut up.

In any case, look to the real problem: why was someone like this able to so easily amass an arsenal of explosives and guns? That's not politics. That's public safety. And please don't talk to me about how those people should have been armed and then they'd have been able to stop him, like victim-blaming scumbag Russell Pearce. Being armed didn't help the cops who were killed here a little while back while they were having coffee. And those people at Cafe Racer, or the people at the Aurora theatre, wouldn't have been armed either. Because you don't normally carry when you're going to a movie or for coffee(and guns are not hard to get in Washington or Colorado). And as for those who do: the Cafe Racer shooter was open-carrying.

The guy with the gun=the threat.

In regards to much of what's been said about action films and their effect on society in the last couple of days: you're looking in the wrong place. Think about the kind of world NRA members think they live in, where if only one is armed, one can always defend oneself and always wins.

It's not the crazy lunatic shooters who are taking action films as a guide to life.

It's the NRA and their allies.

And has anyone who's, for some reason, blaming the completely fictional Batman for this, considered two things:

a) No one, including the shooter, had even seen the film, so how could it have influenced his behavior?
b) Batman kind of has a thing about guns. 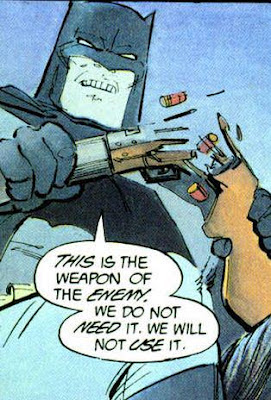 "Inside her idiot madness spoke and bang, Andy fell onto the floor."--Lou Reed