I Didn't Write That!
06 June 2012
In Memoriam Ray Bradbury: An EC Sampling 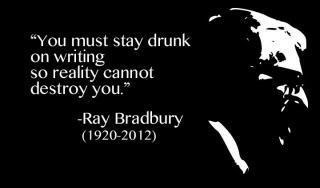 Though there's a lot of science fiction I like, I am not a "sci-fi fan" as such and never have been. My interest in it has only ever been as it succeeds as literature, not any of the tropes of the genre itself. The more the sci-fi elements are downplayed the better I like it(for instance, GALACTICA won me over because they used bullets, not lasers). So my taste in that has always been toward people with more of a foot in literature than sci-fi, like Ellison(my taste in his work was always toward the more Twilight Zone-ish stories, and even more so the essays, not the space opera), Dick, Herbert, Burroughs, Vonnegut, and Ballard.

And it's all the doing of Ray Bradbury, the first one of that genre I read, and my model for what I speak of above. Anyone could read his work. There's nothing geeky about it. He is one of the great American writers of the 20th century, full-stop. He's the man who taught me genre is meaningless and that a good story can cross many at once. And he passed away last night.

, still one of my favorite books ever. And I knew the TV version, adapted by Richard Matheson, wasn't quite it(Bradbury didn't like it), but damn did it try, and in my view still holds up, and is still some of the more intelligent science fiction ever put on TV, at least after OUTER LIMITS.

Bradbury was also very important in comics. EC adapted many of his stories. At first unauthorized, till he noticed, and then it turned out he was an EC fan, so the adaptations continued. Here at Scans Daily are excerpts from some of them:

The October Game (art by Jack Kamen, whose understated, tame style only makes it more horrifying)

The Lake (art by Joe Orlando)

And from MARTIAN CHRONICLES, probably my favorite Bradbury story and one that embodies all that was both beautiful and sinister in his work--two things it often was at the same time. "There Will Come Soft Rains," a story without any actual characters anywhere in it. (PDF)

Rest in peace, Mr. Bradbury, and thank you for making my childhood a bit bearable.