A sampling of the amazing and mighty Martin Atkins(you might also remember him from Ministry and Public Image Limited) industrial behemoth. You can also get his excellent book WELCOME TO THE MUSIC BUSINESS: YOU'RE FUCKED! here for free.

And you can see what he has to say at Twitter. He's in search of some fucks at Kickstarter. Not what you think it means. Or is it?

26 May 2012
Godspeed You!Black Emperor: "Raise Your Skinny Fists Like Antennas To Heaven"

Terrifying. Perfect fusion of horror and comedy. Much like this one.

Thought I'd say a few words. I know you have your thing in Leviticus you have to resort to regarding gay men because there's nothing in Jesus' words about gays. By the way, I assume you're keeping kosher too, for consistency? I mean, you're a fundamentalist. This a la carte stuff could really anger God.

Anyway. I know where you're getting your still-threadbare justification for that particular bigotry. But. About lesbians, who you mention first in this little "sermon":

He continues: "Do the same thing for the queers and the homosexuals and have that fence electrified so they can't get out...and you know what, in a few years, they'll die out

Not a single reference to them in any way in the Bible.

This isn't God by any measure. You already know what you hate, work backward from there and you just use God to make your hate acceptable. You use God the way I use salt on my fries.

This is you. And if there's a God, he does send people to Hell. And especially those that use his words to make lies to hurt others, I'm guessing.

God would never be angry at you for loving your neighbor, you do know that. You do not know what he does to those who hate, but I'm expecting he used the word "love" for a reason.

Time to wake the neighbors with two intense percussion pieces by Iannis Xenakis.

19 May 2012
"Like a glutton loves his lunch." - Some Random Thoughts on Corporate Funnybook Parasites

Chris Roberson was joined this week by Roger Langridge(of whom I've been a fan since ART D'ECCO) in renouncing further work with the Big Two. Good on him. Although it seems kind of hollow as the Avengers approaches $1 billion and DC offers us Watchmen Toast. But it would be good to see more high-profile, talented creators refuse to work with these people any longer. If you just want to put out a comic these days, you don't need them.

And ones who have a name to trade on need them not at all. Even the work by the best creators at the big two is nothing compared to their creator-owned. One page of CASANOVA, for instance, is worth all of IRON MAN. And yes, I realize CASANOVA is now published by a subsidiary of Marvel, but Fraction & Ba still own it. There's more passion in it. I'd have no problem with the big two if they didn't treat dealing equitably with creators as a special prize.

There can't be such a thing as ghosts or curses or else DC and Marvel would be nothing but craters now. The only reason Hollywood came sniffing around comics is the huge pool of IP with no creators to negotiate with. The next stage.

If DC and Marvel can't get talented creators you'd assume they will have to change or die. But no, they won't. They have enough characters to exploit for decades in other media now, and can afford to keep the comics going as trademark anchors forever. Dumb twenty-year-old artists(and apparently they only need five writers at any given time nowadays) don't run out, which is why the big two only changed when forced. But now they don't have to even look like they're trying.

One might say, but won't these characters be tired out after a while? Ah, but DC and Marvel are experts at reinforcing addictions to nostalgia and infantile regression. Which in the stage our culture is entering at the moment they are becoming media-dominant, are useful skills.

Something too to consider: As our nation has become more brutal within and without, all forms of fantasy have become more and more popular. And here's Marvel, poised to normalize that for good.That will look similar to future historians to the popularity of musicals in the eastern bloc during the Cold War.

Superheroes have already been pre-built for people living in basements, why not bubbles?

And fans who loved the Avengers and are looking forward to BEFORE WATCHMEN: it's worth it just for something new to eat your Cheetos with?

UPDATE: The legendary Steve Bissette (thanks for that Steve) reminds us that the present "one throat" situation, where Hollywood only has to deal with one corporation rather than a bunch of creators, began with the success of creator-owned work in Hollywood:

"Don't forget the Hollywood/comics lovefest (a) goes back to the silent era, shortly after films began (with an unlicensed live-action HAPPY HOOLIGAN); (b) the new "wave" started with licensed adaptations of indy properties that DID benefit their creators (if only with option $$), like TMNT, THE CROW, etc.; (c) the current boom kicked off with Tim Burton's BATMAN, with Frank Miller and Lynn Varley properly earning solid book sale royalties from the resulting DARK KNIGHT RETURNS heavy reboot/sales, and (d) the major turn in Marvel's fortunes, leading directly to THE AVENGERS, actually started with a low-profile Malibu-purchase acquisition, MEN IN BLACK. Never. Forget."

And yes, seriously, do not forget that. One could think of it kind of like the way the stages of gentrification work. But the present success of the big two is based on taking over roads cut by creators in every way. And creators no longer really need them. What stopped us in the old days were the economies of scale, the risk in printing. But today there is digital, there is POD, there is Kickstarter.

Publishers are nice and can be very helpful(I like working with Fantagraphics when I get the chance, for instance, they're great people and VERY unlike most publishers; likewise the people at the Graphic Canon) but one has alternatives now. One definitely, if one takes the long view, doesn't need the big two. They need YOU. "Like a glutton loves his lunch."

In which a reporter from the Bethlehem Star interviews a shepherd about the hometown boy made good.

Chapter 3, p. 60. Click and read!
Astute readers will have noticed I have also put the scandalous Chapter 2 back up for your reading pleasure. And once you're done, why not purchase issues 6 and 7 of This Sickness so you may have and hold it in your very hands? (or in your Kindle) And also to support this here indie cartoonist, who's worked very hard for three years to give you this Lulu, which you have to admit is at least better than Lou Reed's. Thanks for your eyeballs!

I will be taking a break from her for a while and working on some other projects that have been pending, but plan to return with Act 2 no later than next year, and one way or another, there will be a collection in the near future. Tell you more when tangible.

Also as usual: original art for chapters 1 & 2 for sale at Sketchmaven! Don't forget: chapters 1 and 2 available in THIS SICKNESS 6-7 at Amazon and Createspace. (now for Kindle as well)

Following up my last post with Pasolini's Canterbury Tales, here is his magnificent version of Oedipus Rex, in which he does Oedipus' story from the beginning, merging the myths with the play and framing it all with Freud.

Impossible to find anywhere normally(which is a crime), here, complete, is the second part of the great Pier Paolo Pasolini's "Trilogy of Life," a series of films of great story cycles in national literature, involving sex and ordinary, peasant-class people's lives, mostly cast with non-actors. The preceding film is The Decameron, with the Arabian Nights following. But this, from Chaucer, is my personal favorite. This is the Italian version with subtitles--there is also a English version I prefer(but can't find), because this was in fact done in England with English actors. Its down-in-the-dirt, grungy atmosphere was also a major influence on the look of Monty Python & the Holy Grail and Jabberwocky, and through those influenced the look of medieval films for a generation.

An excellent documentary(I also recommend Made in Sheffield) about the rise of post-punk electronica in the UK, featuring Throbbing Gristle, Cabaret Voltaire, John Foxx, and the Human League(who believe it or not were good at one time), among others.

A great lost film from 1980, its look embodying 1980's not-quite-this-not-quite-that quality. Starring Jodie Foster and the Runaways' Cherie Currie(playing the girl-in-trouble you'd expect, and quite well), as well as Sally Kellerman. It's the kind of realistic film about teenagers you wouldn't see again even in spirit till KIDS, except that KIDS is also sensationalist, exploitative trash while this is a mature drama. And you definitely rarely see films talking of, or to, young women as honestly. This film didn't do well when it was released, though I'm not sure why. Probably because it lacks said sensationalism--it was made for girls the age of its characters, not creepy chickenhawks, as many films ostensibly about teenage girls sadly are.


It also features Donna Summer's "On the Radio" as its theme, and quite evocatively. She passed away today from cancer. I recall her as the only cool music(usually my mom and dad played the Eagles or Barry Manilow or Christopher Cross, like that) played in my home before my parents divorced in 1980. Most of my memories 1978-1980 have her as a soundtrack. So with her dies another chunk of my childhood.

I don't like disco but I always loved her. But then, she was disco in the way the Beatles were pop: she was, but she was also so far beyond that genre that anyone could enjoy her soaring voice against the multitude of genres it was set against. And "I Feel Love" alone to this day is probably the single most influential piece of pop electronica(in fact, really WAS the first really huge electronic pop song, hugely influential on Sheffield and Detroit electronica) ever made. And unlike, say, the Bee Gees, her music is not at all dated, not tied to its time though it certainly brings back memories. It crossed over with disco and in fact dominated it, but was so much more. I miss pop music that was actually well-made. But I'm old now, I would.

Here's a series of the songs she did that meant to most to me as a little kid.

This week's LULU. Not quite as unaffected by Dr. Goll's death as she'd thought.

A finished ink & color version of this sketch I posted a little while back. Click to enlarge. 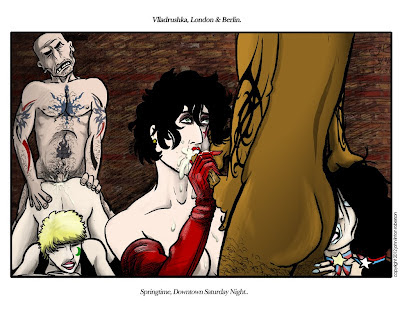 How do you feel?

I remember when I was 9 really looking forward to this. But my dad sold ads for the local CBS station and some nights had to monitor competing stations' ads. This was one of those nights, so I never saw this. How lucky I didn't know I was.

I dunno, though, John Holmes makes a GREAT Dr. Strange.

This week's LULU. She gets some clothes on, and not a moment too soon, the hussy.