I Didn't Write That!
24 December 2018
George Bailey In Jail (from the archives)

So, after the end of IT'S A WONDERFUL LIFE, you know George would still go to jail, right? I mean, just because George got the same town he'd stolen the money from to give him more doesn't change federal bank regulations. 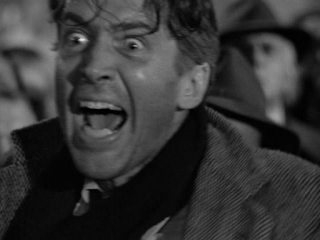 "Fucking Clarence," George muttered during the daily sodomy. "Fucking fucking angels." Then at night he would scream "YOU USED ME FOR YOUR GODDAMN WINGS!" till his cellmate beat him to sleep. They all thought he was insane. But he was fine to pass around for cigarettes. And his stutter only got worse and worse each day.

When no one was around, "There is no escape, George," a disembodied voice would giggle to George in his cell.

Mr. Potter was his only visitor. But he didn't speak; he would merely chuckle for 5 minutes, then left.

The following Christmas Bailey cursed life and all the pain it brought. But at least there was his memory of that wild night with Violet to comfort him. All those awful things she had to do for that wad of money.