The only Ken Russell film you ever need to see.

That is, if you want to avoid the steaming mounds of shit he's turned out, which tend to distract one with stench and volume from the few perfect roses hidden within. Some have their favorite films by a director; most I know have instead with Russell a LEAST favorite they recall quite well. But oh, what a fantastic film this one is.

Ken Russell, when you think about it, is one of the weirdest figures in the history of Hollywood; certainly one of the most idiosyncratic talents ever. One can always tell it's old Uncle Ken--the fast shouting, the amazingly inappropriate sets, the obligatory sexual hallucinations like something dreamt up in an opium haze after falling asleep reading D.H.Lawrence poetry, the great clashes of avant-garde classical music to let you notice when you're supposed to be shocked, and you often are at those moments anyway; the music just makes it more unpleasant. Even his most commercial films bear his mauve stamp.

If one were to sum up Ken Russell's style in a single incontrovertible word, it would probably be "tacky." It's no wonder the 70s were his heyday(a decade in my mind that was the golden age of British & American film, a time of freedom killed by STAR WARS); in no following decade would he have been allowed to lodge himself so firmly, and now there's no getting this embarrassing uncle out of film history. Glaring and glittering like a disco queen from hell, Ken Russell has left his mark. God help us all. There's nothing that can be done now. And yet, here is a director ferociously in love with the classics, and not just any; the often-ignored--in cinema, at least--20th century classics. D.H. Lawrence, whose work I violently detest on the printed page(perhaps he's just too dated; his Victorian sense of what is naughty I find laughably prudish), turned to gold the twice Russell's adapted him--WOMEN IN LOVE and THE RAINBOW. He fell most magnificently on his face in tributes to his favorite classical composers(including the what-the-hell-was-that? LISZTOMANIA and the incredibly vulgar MAHLER)--you can't deny they were works of love.

And then there's the time he did Aldous Huxley's non-fiction bit of historical journalism, THE DEVILS OF LOUDON, as a film. And this time, he was wholly in his element as he would not be again till the wholly different ALTERED STATES, which with this stand as his wildest and most artistically successful films. 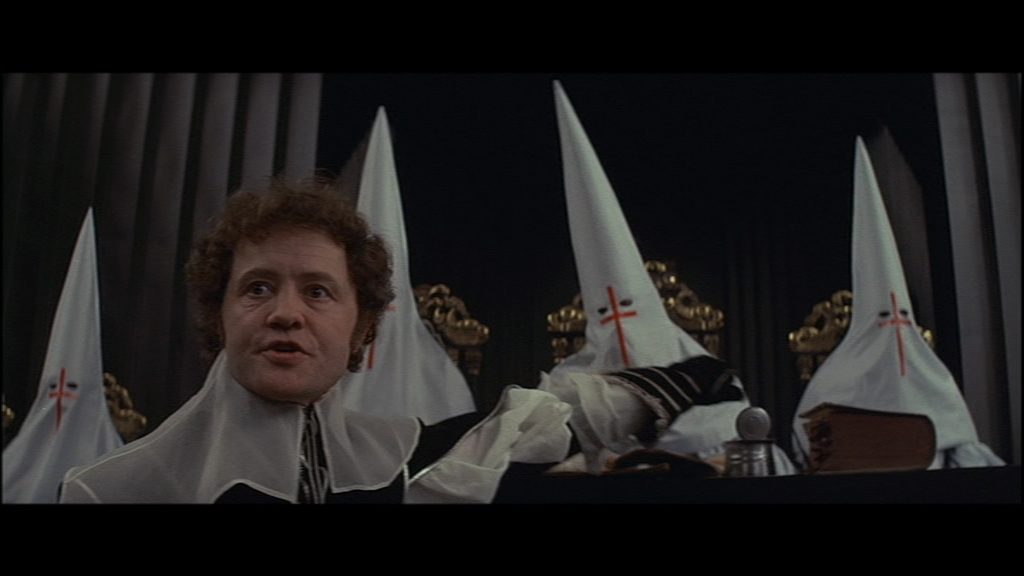 There's nothing wrong with excess. It's when the idea of excess is in fact corny that the problem occurs. The trick, I think, is to keep it escalating at a gradually sliding level, and not to vomit baked beans up at me on the screen when things get slow (TOMMY, 1975). Story in short: Urbain Grandier, a priest, is made governor of the fortified, and mixed(Protestant, but loyal to the crown, and Catholic)town of Loudon shortly after France's 17th century religious wars, in the wake of the death of the town's governor, who just happened to be a friend to the king. The Church won, and Cardinal Richelieu wants all fortifications across France pulled down--so that any place that gets out of hand can be easily razed to the ground.

Grandier will not allow this, and invokes an old promise of the king to leave it untouched. Immediately the authorities set about finding an excuse to remove him. As Grandier doesn't take the vow of celibacy at all seriously(even marrying a girl, himself both groom and priest simultaneously, in a ceremony that oddly doesn't seem at all blasphemous) this isn't difficult. But the killing testimony comes from a hunchbacked, bitter nun from a convent of girls who were simply put there by their families to keep them out of the way; the convent is a pressure cooker of bitterly repressed ids.

The hunchbacked Mother Superior claims Grandier molested her(which she wants him to, very badly, but he never even noticed--or met--her), and possessed her with demons. She is taken eagerly at her word. Grandier is tortured, tried, and burned, the entire town--whose death his death assures--against its only protector because of an irrelevant scandal and madness about witchcraft. 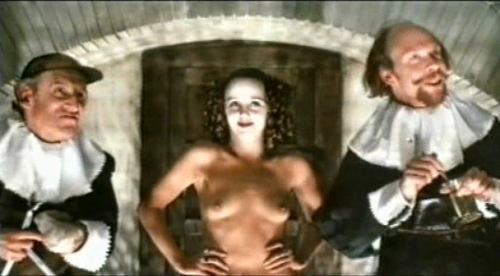 Oliver Reed makes this film. Vanessa Redgrave and the others, they all do their part, but Reed sinks all his teeth into this part and will not let go till he's burnt out. The film is a remarkably good dramatization of the facts presented in Huxley's book--and keep in mind when watching: all this really happened.

Reed presents Grandier as he was described by both himself and others: brilliant, urbane, clever, handsome, and courageous as a man who believes in God but indulges in private vice can. When watching I was reminded of what, at least, people would like to think of Bill Clinton: if we let him indulge himself, he'll be twice as good a president for the guilt. Grandier attempts to make up for his private vices by protecting the town selflessly and firmly till he is killed for doing so. Of course we do not care about his vices, nor, really, do the other characters; everyone seems to understand it's a lie, but a deadly formality that still has real power.

As a study of what true integrity is, this film has a thing or two to teach A MAN FOR ALL SEASONS. What he is killed for is being good where it really matters. As so often in church history, killing in Christ's name is much easier than loving in it, and takes up about as much time. This is the greatest attack on the church ever devised by a filmmaker, vicious and unsparing as the church has always been when threatened, after all, just as is described here.

The sets are totally, loopily anachronistic; perfect shining white bricks with blue shadows everywhere, the doing of Derek Jarman. It is not accurate, but works as a stage set would, making of the whole frame a fanciful but dark and effective pictorial composition, perfectly reflecting the delirious thick atmosphere, which fumes from each frame of the film like the humidity of a swamp in summertime.

The acting is absolutely over-the-top and works beautifully, each actor breathlessly trading lines rapid-fire with the other as though Russell had told then he only had 30 seconds of film stock left(or perhaps nostrilfuls of cocaine supplied right before the shoot). There isn't a boring moment in this buzzsaw-paced maniacal, giggling film. There isn't time to breathe. More "historical films" should be as energetic as this; the actors should appear to be having as much fun with it as this. This is historical filmmaking by those who understand it enough to be justified playing around, exuberantly; done not out of reverence but to ram the original source's message home.They definitely don't make movies like this anymore. Or ever will again.

Update: And now you can see it at Filmstruck! No legit DVD yet, though there is the Angel bootleg I have that you may be able to track down.

Also, there was a play by John Whiting which the film is partly an adaptation of--and an opera by Krzysztof Penderecki of said play which I am certain was a big inspiration for Russell--he almost certainly was aware of it; at the time it was recent and Russell was a huge fan of modern classical music. A lot of the music in the film is very reminiscent of it. And the opera is nearly the same length as the film. It's very rare, and here it is.