I Didn't Write That!
21 October 2011
Autoarchaeology: Thoughts Looking At A Book About Horror I Had At...Six

Every now & then I recover relics from my childhood, as is the habit of my sad generation. Found this for instance. My parents gave me this below, Horror Movies- Tales of Terror in the Cinema

, by Alan Frank. It's a fairly basic but enjoyable picture book from 1974 about horror, and much of it has to do with Hammer films and related sorts of material. They gave me this on my birthday.

Looking at this now puzzles me. It brings back a horde of memories, but I already could remember a lot from then. (I was born in 1969, and my memories stretch back to this moment on TV with John Dean) But I notice in this are a huge amount of pictures from Hammer Films. This means that the image you see above, of Christopher Lee, is the first image of Dracula I ever had. I could never take Lugosi seriously as a result, by the way, and became quite a Dracula snob, admittedly.

This means there are bare breasts. In one case, with a stake going in between them. Here. This is probably the first image of anything like nudity I had ever seen, from Satanic Rites of Dracula, a film that turns out to be so dreadful I've never finished seeing it. But what an image. 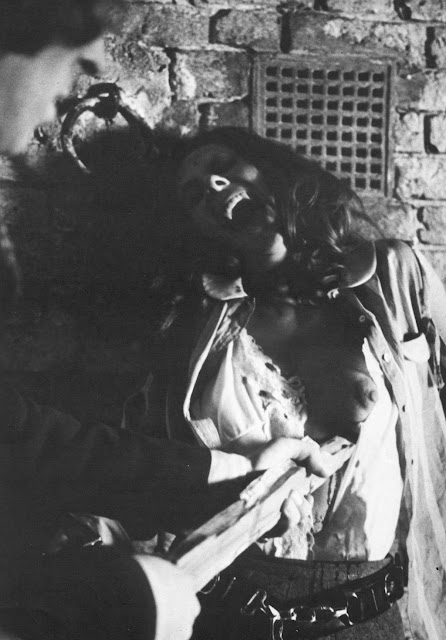 Tame to us, but this was 1975, and I was just then six. This was not just the first film book I ever had, but the first images of horror I ever saw. And for a while, the only ones, because I certainly didn't get to see the films. Not on TV, and we didn't have them VCRs or cable then neither, in the ole days. I don't think I actually saw any horror films till I was about eight, when I accidentally saw M and CALIGARI back to back one afternoon on SCETV; I think they were college film telecourses. Then shortly after, the greatest non-NOSFERATU version of Dracula ever, the BBC one with Louis Jourdan

It occurs to me that one reason I am so fond of the more extreme films from 1969-1974, besides that so many are just plain cool(taking advantage of a permissive window era in culture beautifully), is that to me, from an early age, this is what horror looked like. Much like my first Superman & Batman comics were O'Neil/Adams and the huge treasury reprints of the Golden Age stuff--that's what I saw first and it shaped my perception of everything after. So these were formative images, at least aesthetically.

I recall that I understood to some basic degree what I was looking at, at the time--that these were a woman's naked breasts. I also recall not thinking there was anything odd about it, because no one had ever said there should be--it never came up, because after all, I was just turning six. I mean, there was no feeling of looking at something forbidden, of something I should hide, or of any particular excitement thereof, as you might expect. Like when some people as kids found a PLAYBOY in the woods or something. It just seemed completely normal. I do remember not looking much at some of the tackier images though.

I also had a copy of the Grimm Fairy Tales. (I was reading from a strangely early age.) Mine was maybe different from yours. Mine had the versions where, for instance, Snow White's stepmother is forced to dance in iron shoes in a fire till she dies; where Cinderella's sisters cut off pieces of their feet to fit in the slipper(and even the blood trail doesn't tip off the prince, by the way--birds do); and where an illustration of Fala's severed, weeping head hung over the gate in The Goose Girl haunted my dreams. We owned horses and my parents took me every year to see the Lipizzan stallions, so that in particular hit little kid me on a gut level.

I grew up with these. To me, these were the normal versions of the stories. No wonder I seemed like an alien when I started going to school proper, now that I think of it.

I don't feel I was warped or damaged by any of this. If anything, it shows me that kids are pretty sharp till we start telling them this or that word or image is bad. They can tell what's real and what's not. Well, except the stupid ones. But it wasn't like I had liberal, freewheeling, enlightened parents, like they were hippies or something. This was South Carolina. They weren't religious righties or anything, thank Cthulhu--I don't think I went to church regularly till I was about 8, when my dad wanted to look like a good Christian for his boss-- and they were educated people. But I was six. Now that I think of it, they also let me read Gerber's HOWARD THE DUCK, not a comic for little kids, quite young. I wonder if they looked past that it was a duck, or that they were fairy tales.

--as much as I hated the slasher genre in the 80s). And come to think of it, they did too. Judging by what they went to see, and what they read, they loved horror. I recall them loving NIGHT GALLERY, KOLCHAK THE NIGHT STALKER, the Jack Palance TV DRACULA (which I saw recently, and sadly it's really awful), THE EXORCIST, ALIEN, and JAWS for instance, but then, who didn't? Horror was very "in" in the 1970s, and was also very good then. And then there was my mom's obsession with, and frequent referencing of, the "Time Enough At Last" episode of Twilight Zone.

But me? I was into Star Trek and Batman about then, as I recall. And tornadoes for some reason. (doodles of them cover everything paper I had then) This book--and a couple of others my dad gave me later on--is what made me interested in horror in the first place. I saw these stills long before I ever saw the films. Some I still haven't, and experience has taught me in many cases I should leave it that way--sometimes stills imply a much cooler film than the real thing turns out to be.

But what I wonder is: did they ever actually look inside the books they gave me? Or were they actually trying to introduce me to this?

I guess it makes me wonder how much I actually understand my parents, both dead now. I always thought of them as reasonable, but mildly repressed. Compare this. In the late 1970s there was a huge Dracula and vampire boom. I recall getting one of those quick-buck b/w pulp film-still magazines, this one on the subject of, of course, vampires. It had Frank Langella on the cover. There were some articles, which I devoured, as I did anything right then on vampires. I must have checked out more books on vampire folklore from the library than any other kid. (I wonder why all their titles were set in Nouveau, though)

One of these articles was about the possible basis for vampire myths. It got into the subject of succubi. These, the article said, came about because of a misunderstanding of wet dreams.

"MOM, WHAT'S A 'WET DREAM?'" I shouted across the house. She demanded to know what I was reading.

Then she saw, inside, a still from Daughters of Darkness

. With, yes, breasts. This image, cropped to just from the navel to the right in the magazine, basically just topless. But so poorly printed that, to be honest, what was in the picture were more just general shapes than anything. But Mom certainly knew what she was looking at. 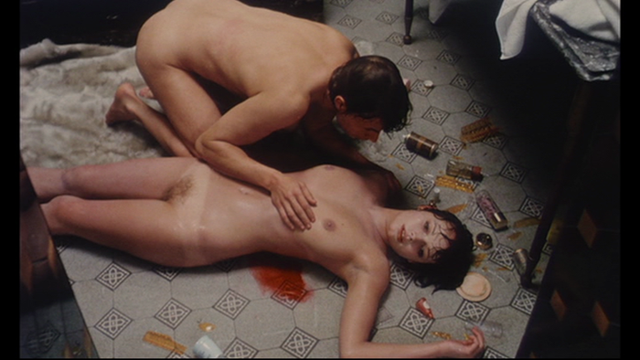 Soon after they asked me if I wanted the back cover picture of Bela Lugosi. But I never gave a fuck about Bela Lugosi, so I said, confused, "No," not realizing they were going to throw it away. Up to that point they'd never exercised that kind of restriction or told me there was something I couldn't read.

Right after that my father gave me the clumsiest birds-and-bees talk I ever got(yes, more than one--he forgot he'd done it and later repeated it when I was 12). I was a bit weirded out--where was this coming from? It's a good thing I didn't listen hard. He tried to explain it by way of its being similar to something I saw the dogs doing once. "But it can sometimes be fun," he assured me, like that helped.

I also remember he made me stop reading MAD when a parody of "Three's Company" prompted me to ask what a "homosexual" was. He told me to never, ever say that word. Especially at school. That's inspired much speculation in me over the years.

As I found out later, at least as my somewhat mentally healthier mom knew him, sex wasn't something he was very relaxed with, one reason it became such a sad marriage. She once told me, once I was an adult, they'd only had sex four times. I have a sister, and the marriage lasted 13 years, so you do the math on how miserable that made my mom.

It was only two years later he left her. And not long after, his first suicide attempt, planned in such a way(despite that there was never NOT a full gun rack--he hunted ducks--in any place he lived: using pills, which worked the third time, in 1986, less than one year older than I am right now) my mom was sure to find him. And soon after, the divorce. He was not in a happy place. I think he felt if he became strict and rigid on these matters he'd be able to quiet the Vietnam nightmares that were starting to overwhelm him. This was a man whose best friend's head was blown into his lap by a booby trap, after all.

It's hard to jibe these two versions of my parents. I wonder if the change had to do with them starting to go to church regularly. I'm glad it took them so long, otherwise it might have stuck.

Memories are such complicated tangly nets. Influences even more so. And you will never truly understand your parents. It's like trying to point to the angles of the fourth dimension--if you were outside it enough to see its shape you wouldn't be what you are.
___________________

Labels: birthday, film, horror, it's all about ME, personal, smut, South Carolina, superman