AKA "Shame."In which a pre-STAR TREK William Shatner--and quite well--plays a racist, segregationist provocateur who sets off all the most evil impulses in a small town. A quite amazing little film when you consider it was made in an actual small Southern town and that much of the cast were locals. And that it was 1962, when civil rights workers were killed down South.
And he's not like a Teashirt. Oh, no, not at all.

One thing I like about his performance is that he never lets you forget, this character is a bully, and therefore a coward to his core.
READ THESE IN THE RUBBLE

Below, the complete BBC adaptation

from over a decade ago of the allegorical, satirical postwar fantasy classic by Mervyn Peake

, starring a really astounding Jonathan Rhys-Myers as Steerpike, the Machiavellian social-climbing villain--but also, depending on how you look at it, the protagonist--of the piece. This is Rhys-Myers at his peak, so to speak, like Clockwork Orange's Alex reborn.

An interesting thing especially to look at and compare to the dynamic playing out in the UK with Murdoch, who with his son has been served a summons in person today by Parliament. His career can be argued to have been built on breaking deference to the traditional establishment, by humiliating the Royals. While also breaking unions, ruining British society and culture, and of course making a fat wad of cash on it.

And oh, apparently establishing a private blackmail security state of his own. This is an interesting and new thing in history. Under some circumstances you might think this is a good thing, to harm the powers that be. But it's being done by someone who wants to suck dry the brains of the whole nation. Just for himself, not for any ideal of freedom or choice.

The thing is, to break those things is in some ways to break Britain. Britain is its rituals or it's just the 51st state of America. It doesn't ever seem to hold. That's kind of what Gormenghast is about. It's an odd work. Normally I dislike fantasy outside comics(and I'm choosy even then--we have to be talking about Russell or Vess or someone like that), but Mervyn Peake, also a great artist and incidentally, the first British soldier to walk into Belsen, was a very different sort of cat than Tolkien(who I've disliked since I was 10). His work is very akin to the early Elric stuff by Michael Moorcock, which is really more about the death of Britain's empire than anything else.

Gormenghast isn't fantasy in the way people think of it. No mythical beasts, no magic. It's mostly about social ritual and cultura continuity driven to mad extremes, and how something so brittle can break very easily when the right little bastard cracks it.

In some ways it is to, say, Lord of the Rings what Ron Moore's Galactica was to Star Trek. More grounded, less about spectacle, and a lot of allegory. Gormenghast is really about lush, surreal descriptions that bring you into a place whose every minute is defined by endless ritual. Which drives its leaders mad.

Steerpike is a boy from the kitchens(the worst place to be) who somehow does the unthinkable--rises above his class, through flattery, lies, concealment, kidnapping, and rumors, to become, in fact, the master of rituals(the most powerful position), all of which is presented as something unnatural, like a disease advancing. And then the system vomits up the disease. I am no fan of the class system, but if it destroys a Murdoch it can't be all bad.

It's all very strange and beautiful.

Anyway, here you go. Enjoy, if you haven't seen it. Some of the digital looks a bit cheesy now, but look at it more as the hyper/surreality of Magritte. And here too is a Radio 4 adaptation.

An assortment of splendid, spacey work by the Spectralist composer. Kind of like Xenakis but with more focus on melody.

OUR COMICS WILL NEVER BE RETCONNED! GUARANTEED!

I'll have more to say about the revolting sores on the world that are Rupert Murdoch and Rebekah Brooks, but I'd rather wait till things stop moving quite so fast. Anything I say about it now could be superseded in an hour. We're already up to their conducting surveillance on a prime minister's sick child. So this is more of a random roundup. So much.

It's true nothing explodes quite so abruptly as hubris. There's gushing blood in the water, lots of it, and other, smaller sharks than he who know they'll never get as close to the old ferret's throat again. Everybody hates Murdoch, but they also either fear him and/or need him. But he may have made his usefulness moot. This has so far gone to two, maybe three key parts of his empire and spreading fast. Stockholders are suing. He can't close down everything, can he? Well, one can hope. But it's amazing that the News of the World closure seems the least surprising part now.

In the meantime, keep up on it here at the Guardian. Here now is this, which please feel free to pass along.

How happy the man

They are a cute couple though. People wonder why Murdoch is willing to sacrifice his own son before this person. I submit it's probably something she does with her tongue.

I shouldn't make such terrible and slimy innuendoes against Rebekah Brooks. I'm sure, when I see pictures like this, there's no reason Rupert's wife reportedly deplores her. Probably just doesn't like gingers. 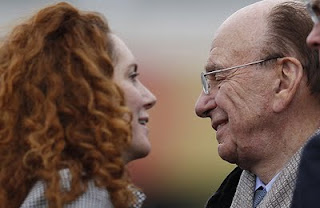 The ferret in winter

And she's so very sympathetic. Just look at this collection of astounding examples.

Moving on to the startlingly amoral Paul McMullan vs. a very pissed and articulate Steve Coogan. It's really amazing to me about a lot of the players here: if I were going to cast villains they would look & sound just like the Murdoch people. Very Dickensian. Paul here might as well be named Slimy McWeasel; just look and listen. McMullan has to be played in the biopic by Jam's Mark Heap or there is no justice.

Paul McMullan's "bit of fun" included driving Denholm Elliott's daughter to suicide with information gotten by paying off a cop.

Here is a brilliant piece from the Daily Show last night by Jon Oliver that sums what we know so far up nicely, except Gordon Brown.

And what's really great is you can protest the BSkyB deal this whole scandal is fucking up royally for Rupert here.

The foul practice has turned itself on me, I can no more.... The king, the king's to blame. --Shakespeare

READING IS FUN and MENTAL

I've heard a great deal about Michele Bachmann's anti-gay crusader husband Marcus, but it was only yesterday that I heard his voice, which, as Andrew Sullivan noted, makes Corky St. Clair from WAITING FOR GUFFMAN sound straight.

And then I think about Michele herself, and how she doesn't at all seem like the kind of clueless moron who has absolutely no gaydar.

And how anti-gay zealots NEVER turn out to be absolutely flaming...

Listen to his voice yourself and you'll see how fabulous a speaker he is.


Afterward, it's rumored he went on to call gays "silly gooses."

No, no, this man isn't gay at all. He's married to Michele Bachmann. When beards get flaky, you shave them. But she's still there. That should prove something.

YOU SHOULD READ THESE

The Wonder That Is Flashpoint: Lois Lane & the Amazons of Gor

So I'm reading through the various absolutely wonderful DC FLASHPOINT event series that I have absolutely no complaints about. I think it's a great idea to spend the summer turning over your whole line to people from DCU Online who can't draw anatomy without Poser. For this is the 21st century, and no more Grandpa Pencils. I for one welcome our tracing overlords. And besides, how best to make sure people BEG for your relaunch?

That said, I felt I really needed to bring your attention to the standout achievement of the bunch: LOIS LANE AND THE AMAZONS OF GOR. I think they put it out under a slightly different title. It's just that, especially as someone whose business it is to draw women, I found so much to learn from in this expertly-wrought master class in female anatomy, perspective, and how clothes drape. Behold these four pages drawn by Eddie Nunez, and love them. LOVE THEM.

As you can see, Howard Chaykin has NOTHING on Nunez when it comes to realistic treatment of dresses on the body.

I especially find her incredible disintegrating paper dress to be clever. Best of all, nothing causes the ripping. She merely runs. Look at the page before and the page after. And look at that thigh in the first panel! Is that a muscle? Does he think there's anything between a woman's front and back?

And that pose in panel 2: DRAMATIC. EVERYBODY DO JAZZ HANDS! Her, and the little boy in the exact same pose in the panel below her.

And I really love the sense of mystery. Like how exactly it's clinging to her crotch. As it does in each and every panel.

Also, where does she keep her phone? A question no one wants answered.

Because Nunez has the genius to realize that clothes are just a few more lines you draw on a naked female body.

And the last two panels! WOW. SHE KNOWS BOTH HIS NAMES. It's like at first she was calling out to another Jimmy drowning, and then wanted to avoid confusion.

But here is the crowning achievement.

Look at the Amazon dressed up for a GOR cosplay party. DC, at the least, there are plenty of competent artists who know how to draw sexy women, if that's what you want, WITHOUT making me vomit. Yet you have the genius to not employ them.

And I am absolutely sure there's no reason to even think about a female readership with a Lois Lane book of any kind. KUDOS. Lois Lane fans, REJOICE!

I am full of admiration and my heart is filled with love.
And please, do not call it Trashpoint, because that would be rude. It should not remind you of ULTIMATUM. Not at all.