That's not a joke. Right now, it's being reported that Wisconsin Gov. Scott Walker's pet judge, highly-conservative Supreme Court Justice David Prosser, got into an argument with fellow Justice Ann Walsh Bradley and tried to throttle her. "Grabbed her neck." During arguments over the anti-union bill, as it happens. So she is alleging. 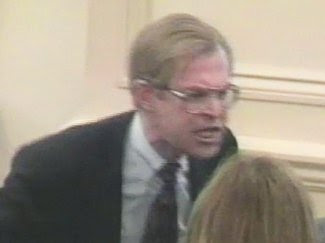 This judge, you may recall, Walker really wanted on the court badly because it was he that would provide the final nail in the coffin of Wisconsin's public sector unions. So badly that they may have fabricated a Waukesha's worth of votes for Prosser in the last election. You may recall I called the official who may have done this a fucking liar here a little while back.

Well, it turns out this judge is also apparently a ragey psycho, who thinks it proper to be violent to women to make a point. Potentially homicidally violent. I wish I could say it surprises me. But not even a little bit. It's not like it hadn't already been reported he's a vile, reactionary man with a history of acting like this toward female justices, like in 2010 calling Chief Justice (and first female SCWI justice) Shirley Abrahamson a "bitch" and threatening to "destroy" her.

And everything that's been done so far by the conservatives in Wisconsin has been notably obnoxious, bullying and brutal in every other way till now.

Such are our times, and such, often, are today's conservatives, for that matter. I look forward to Scott Adams' defense of the judge as a fellow man, and to tell us how men sometimes just can't quiet that instinct to strangle a woman.

...AND HERE IS NEW DRINK FOR YOUR EYES