The governor who made such noise about his state not needing federal money, who has implied Obama is illegitimate, who to look tough not that long ago made big noises about secession, has a state that has burned to the ground. You'd think that would be a perfect time for him to show how tough and independent Texas is.

But instead he whines ferociously that the federal government and Obama are paying too much attention to Alabama, Obama even visiting there today.

Man, Perry, you're a pussy. I mean, everyone knew you'd come running to the federal government--like any responsible governor should--for help with your massive natural disaster. But to whine like this, like some spoiled brat, that you're being ignored after having done everything you could to alienate Obama and claim your state is some kind of independent nation? And to try to diminish Alabama's suffering as though Texas deserves more attention because, I guess, it's Texas?

If not for your people being in need you're not able to meet, I'd tell you to suck it up and be a man. As it is, keep your hair on, you pathetic little hypocrite.

But here we see the reason for federal government, and why governors shouldn't go to so much trouble to claim it's not needed. Because then they look like spineless, stupid cowards when the time comes. Like Rick Perry.

Labels: disaster, i told you so, rick perry, right wing, texas, you're pathetic

In which I talk to Tim Young about theatre & comics(for those that don't know, I came to comics via theatre, which was where my real training was), and then as I normally do, tangent off into comics storytelling issues, and where I think cartoonists mess up in relying too much on film as an influence.

No doubt some of the things I say about Don McGregor and Scott McCloud are unfair, but I also have some nice things to say about Chris Ware, Art Spiegelman & P. Craig Russell, so I guess it balances out. Personally, I think I sound ridiculous whenever I'm interviewed and hate the sound of my recorded voice, but for what my opinions are worth--here, enjoy!

Labels: comics, deconstructing comics, interview, it's all about ME, my comics, my influences, theatre

A feast of early electronic music by the pioneering Raymond Scott, also known as the composer of the animation standard "Powerhouse"(you've heard it. Click here, you'll see).

In honor of Fidel Castro stepping down in Cuba today. The tracksuit. I couldn't take my eyes off the tracksuit. (click to enlarge) 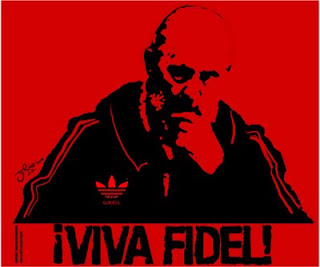 One of the greatest American filmmakers, and an example of all that we have lost as a culture, has passed away. Sorry, but you know what? Our peak does turn out to be about the time his greatest films were made. His work reminds me of the decline we have been on since...well, I guess in my lifetime, which has been a little over 42 years so far.

Many already know he did NETWORK, DOG DAY AFTERNOON, and TWELVE ANGRY MEN, so rather than be one of many to show you a clip from one of those, here is instead, complete, Rod Steiger in what is my favorite of his films, "The Pawnbroker," for which Steiger was completely robbed for the best actor Oscar. A film that quite obviously exerted a heavy influence on Spike Lee, and any other director with a serious feel for an urban setting. Angry, touching, stark, painful and true, enjoy the greatness of Lumet. He will be missed.

...and speaking as someone who's actually had professional acting training: Kathy Nikolaus, the county clerk of Waukesha who claims an improper vote count in the State Supreme Court race between Prosser and Kloppenburg(the latter having won, by a slim margin of less than 300 votes, as of last night), who is claiming a whole town's votes went uncounted because she forgot to hit "save"(I seem to recall one Rose Mary Woods trying a similar explanation), in my opinion, is lying through her teeth, and not very comfortable with it either. Watch her in this piece, the way she sways side to side, touches her hair. Listen to the broken, impatient, almost pre-emptively defensive flow of her voice. These are tells. She is lying. There are dirty tricks afoot in this race that the Republicans are playing. I'd bet money to this effect.


P.S. And as a reader from Ohio points out correctly, MS Access saves automatically, so she's definitely lying about not pressing "save."