I Didn't Write That!
12 March 2011
The Problem With Newt Gingrich's Raging, Throbbing Patriotism

Newt Gingrich's rather passionate reaction to America, as he told us in his Penthouse Letter he kindly read on CBN for Pat Robertson this week, could hamper him were he president.

If actually in the Oval Office, patriotism will keep him from ever getting things done.

I mean, it made Nixon start talking to the paintings--what would Gingrich do, once left alone in there, the very philosophic and historical center of the nation that makes such powerful forces rush forth from him?

Just think, as the history rushes to Gingrich's loins. He'll just be shaking there all day, coming and coming with no blood to his brain.

But no, given he lacked, as the GOP would tell us, the extra trait of patriotism, of course he could split his attention. 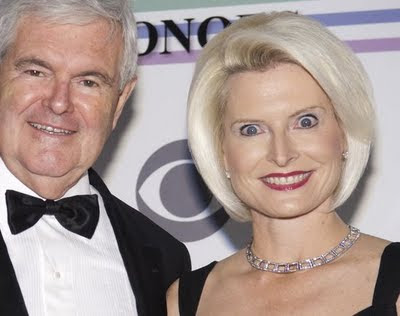 Newt & Calista Gingrich: They're imagining new pleasure orifices to carve into you.

Newt cares just a little too much.

Even a woman, even ten, even watching his wife have sex with, then slit the throats of, each as he finishes with them(not that I suggest it's impossible they already do this), would not be enough to contain him, as the problems of the US consumed him less than its hope, its majesty, its tits.

Newt would just writhe there on the rug, like a human test subject for Viagra, convulsing and ejaculating till dehydrated, and till there wasn't even blood anymore.

We do not want a man who will get the Gush, god forbid.

We cannot do this to Newt. Don't ever vote him in. You'll kill him if you do.

THIS AIN'T A LIBRARY