After a week of trying to meet print size requirements for those three books I keep mentioning, I'm just doing single drawings, character studies, this week. So what began as an exercise in drawing clothes on Vladrushka, which I've rarely done And you'll notice that I have Miss Prynn in Story of OH! in the same dress I've put Vladrushka in. I'm trying to learn more, I swear.

In this case the dress was a sort of 1957 Liz Taylorish number I saw Dan DeCarlo use a few times. Though that one wasn't strapless. It started here:

Then colored, because I need to practice doing that. The pattern was partly inspired by the color scheme of the Soviet Wonder Woman in Millar's RED SON:

And then I went overboard. 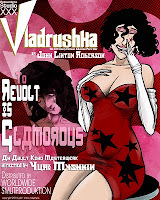 I don't even know what that means.

Now I think I have to honor the spirit of Mort Wiesinger and never let a cover go without a story. Hey, it's one game to generate ideas.

Labels: my art, my comics, vladrushka