I was just now very impressed by a webcomic--a feat in itself. But one that actually outdoes a certain British comics master at his own game, which was to bring out hidden potential and complexity in old story concepts by exploring implied questions others had left unattended. I will not say who I mean, because that would spoil the shock of the ending. And it actually has a different one, which is linked to, but what's here is somehow more poignant.

I would just tell you: click here and read it, and be very careful if you, like me, are sentimental about animals, and about dogs(and in my case cats) in particular. My life was saved at the age of three by a dog, so dog stories get me every time. But this one is a bit beyond that. Sort of a Rorschach test, and you're going to hit me for that pun when you finish this.

I think this is a work of genius. 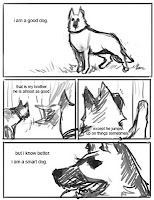 When you finish, you may need this.