Just watching ABC's coverage of the Israeli boat massacre, and they certainly mention today's worldwide protests, but they also label them all as Muslim protests, and only show footage of the visually-identifiable Muslims among those on the boat, thus attempting to marginalize the outrage, so some just see the facial hair and the veils and forget.

Not so. Everyone is furious. The very first picture you will see in this slideshow is orthodox Jewish activists protesting Israel's massacre. 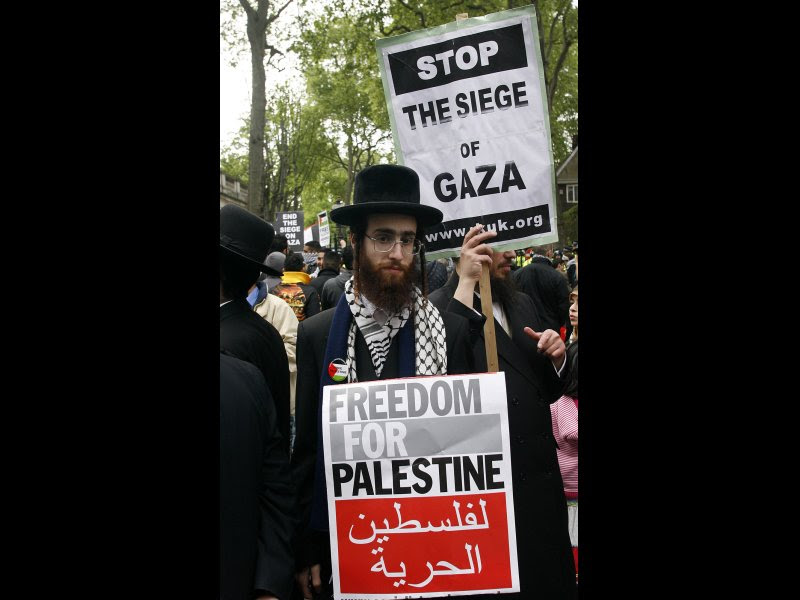 It isn't just Muslims who care about this. It's people with a sense of decency and justice, who believe Israel is a vicious bully that believes it can commit atrocities at its whim. As an Israeli roommate of mine once said, it's run by old men with old grudges who discourage younger people from getting into their government, which is why it always seems to be the same people shifting back & forth like musical chairs. As long as that's the case, and as long as they never face sanction for crimes they commit, that government will continue doing things like this.

An attack on people bringing humanitarian aid, without guns, in international waters. Israel's government honestly thinks they can call that self-defense.

...on an unarmed aid flotilla in international waters.

Some 700 pro-Palestinian activists were on the boats, including 1976 Nobel Peace Prize laureate Mairead Corrigan Maguire of Northern Ireland, European legislators and an elderly Holocaust survivor.

Just what the world needed to open the summer. It's been so quiet, what with the Gulf, North & South Korea, and everything...

This was what I had to say about Bush, and his administration, and Katrina, way back when.

I don't see now why you deserve any better just because I voted for you.

But hey, at least you're enjoying yourself this weekend and not letting this get you down. Why, look at these pictures from his trip to Chicago! Very presidential. Just like this picture.

"It is as enraging as it is heartbreaking, and we will not relent until this leak is contained, until the waters and shores are cleaned up, and until the people unjustly victimized by this manmade disaster are made whole."

That would help a lot, Obama. You should look up the word "Chernobyl," something that contributed to the fall of an otherwise splendid, well-meaning, reformist leader.

Your enemies, though...you're so worried about what they think and how you'll look--to them. Like most Democrats, you've been sucked into this post-Kennedy reliance on symbolism.

And I think the time has come to seriously question a lot of crap we've been blindly accepting for decades, the idea that somehow the free market is a god, that can be angered, that may bless us so we should not insult it. We think of it as something other than we should, which is a tool, to be adjusted as necessary, not a god.

I think that it's been proven at least in the last few years that corporations, left to their own devices, are quite dangerous and irresponsible. That if they are legally individuals, they should be treated like other individuals who have committed monstrous criminal acts.

That there is no such thing as a free market, but rather a regulated or an unregulated, but rigged, casino. That quite simply, capitalists do not have our best interests at heart and do not deserve the stronger-than-religious faith they inexplicably have from people who have this useful fantasy they can be like them someday. So few of us ever will be, or maybe we have it for a while, and then when it's all lost, we learn it was only an illusion of control, as in these times so many are. That some will always be prosperous, while others will have cycles of prosperity and poverty, but that they will never be as safe as some are. It's rigged. You will never be in their club, and their thanks for supporting their system is to poison your seas and land, to steal all your money, to leave you for the wolves.

One could argue: Screw capitalism, and screw the free market system, if that's what needs to be done to protect the rest of us from these criminals. The free market isn't a suicide pact, either, and the point is human, not ideological, survival.

I wonder how much that will be argued in the coming year.

Once again, a new crop of collectible and sought-after items on Ebay for you to purchase so I can keep paying my rent.

This time around it includes classic issues of the National Lampoon, the unreprinted and hard to find ACME NOVELTY #3(featuring Potato Man) by Chris Ware, a set of the classic UK anthology TRIDENT, a rare EVERGREEN REVIEW from 1966, and much, much more, including the original art for the LULU "Gun" illustration you saw on this blog! Click here, peruse and buy!

LULU Page 20-End of Chapter One

Saturday, and we've reached the end of Chapter One! LULU, Chapter 1, page twenty. That's it for a few weeks, while I get caught up on the rather naughty Chapter Two. Click and read!

And please comment on what you've thought of it so far. I want to hear from you! Thanks for reading so far. 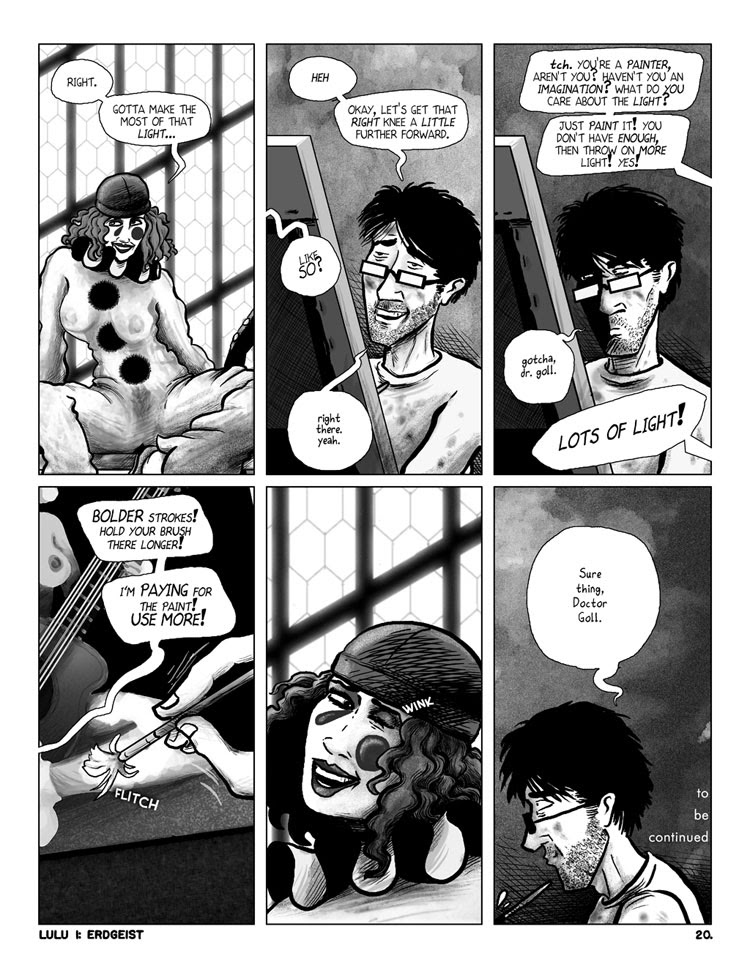 You'll find the whole chapter in THIS SICKNESS #6--available only at Createspace/Amazon.

No one should be shocked at Rand Paul's dislike of the Civil Rights Act, particularly when his father has supported the old BELL CURVE idea that blacks are less intelligent for years.

What? You thought he was wonderful because he voted against the war? You really should pay attention to the whole guy. Find out lots more here.

Paul’s alliance with neo-Confederates helps explain the views his newsletters have long espoused on race. Take, for instance, a special issue of the Ron Paul Political Report, published in June 1992, dedicated to explaining the Los Angeles riots of that year. “Order was only restored in L.A. when it came time for the blacks to pick up their welfare checks three days after rioting began,” read one typical passage. According to the newsletter, the looting was a natural byproduct of government indulging the black community with “‘civil rights,’ quotas, mandated hiring preferences, set-asides for government contracts, gerrymandered voting districts, black bureaucracies, black mayors, black curricula in schools, black tv shows, black tv anchors, hate crime laws, and public humiliation for anyone who dares question the black agenda.” It also denounced “the media” for believing that “America’s number one need is an unlimited white checking account for underclass blacks.” To be fair, the newsletter did praise Asian merchants in Los Angeles, but only because they had the gumption to resist political correctness and fight back. Koreans were “the only people to act like real Americans,” it explained, “mainly because they have not yet been assimilated into our rotten liberal culture, which admonishes whites faced by raging blacks to lie back and think of England.”

But not discriminating? He wants that to be in the realm of civic virtue. Like not using profanity in front of children. Like mowing your lawn regularly.

He thinks it's a good choice to not discriminate. But he does not believe it should be prevented.

What an idiot. Here is the libertarian view at its bare bones. And why it is useless to making the world in any way better. About what you'd expect from someone named for Ayn Rand.

Saturday! LULU, Chapter 1, page nineteen, with Schwarz enduring more artcrit from Goll, and Lulu showing us some of her assets. Click and read! 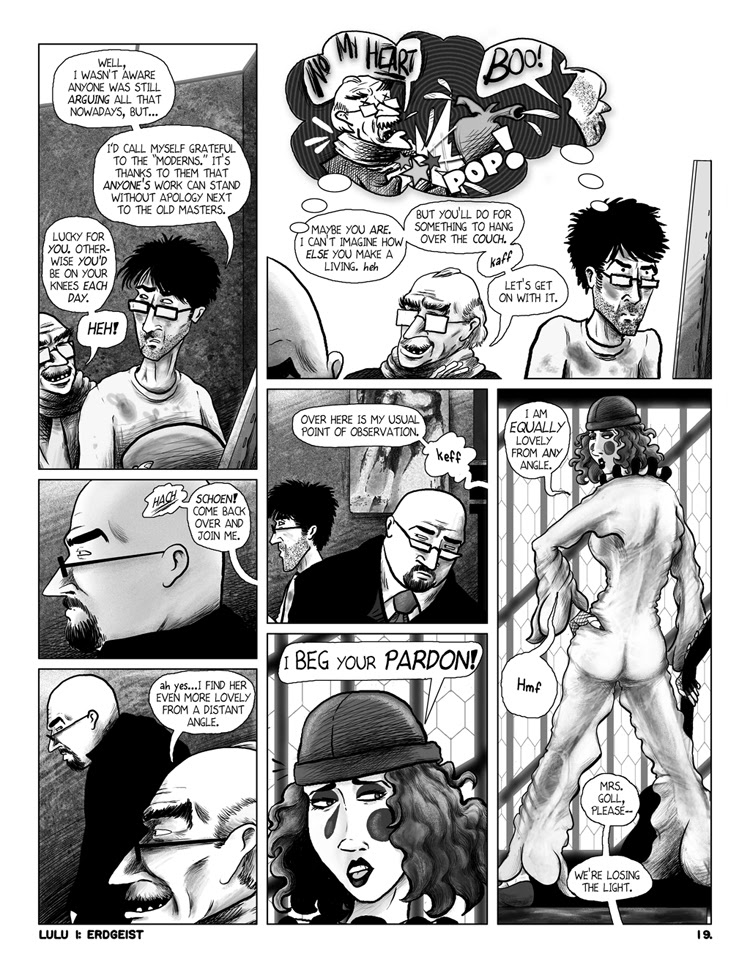 Saturday! LULU, Chapter 1, page eighteen, with some conversation with Schoen. Just what is the deal between him and Lulu? There was a hint in the first two pages and, if you know the plays, you know already. But read on. 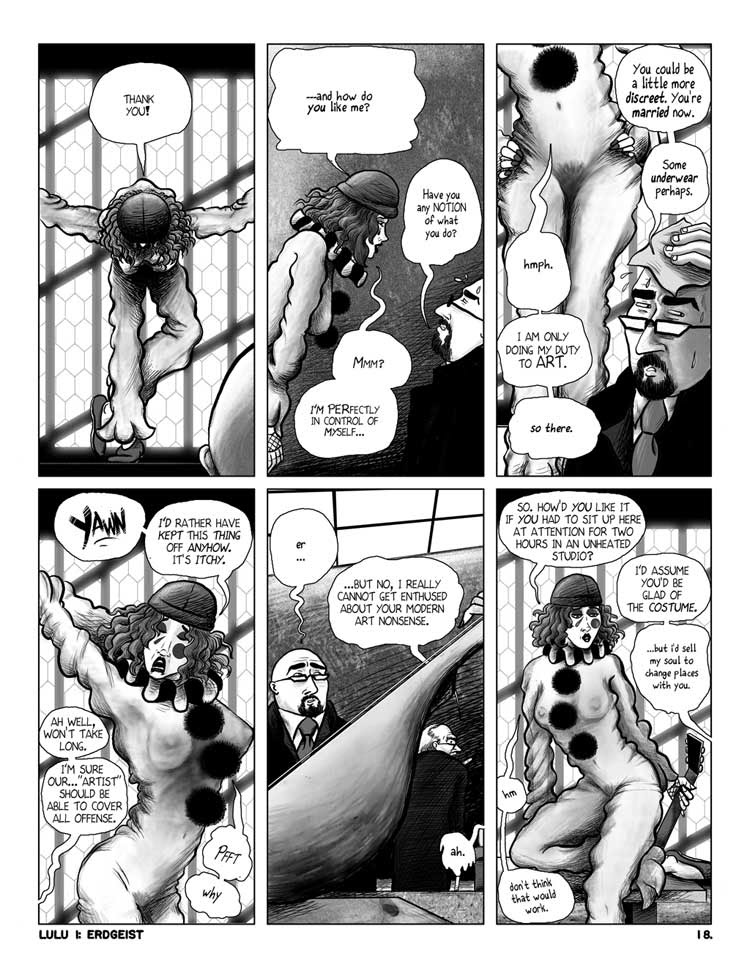