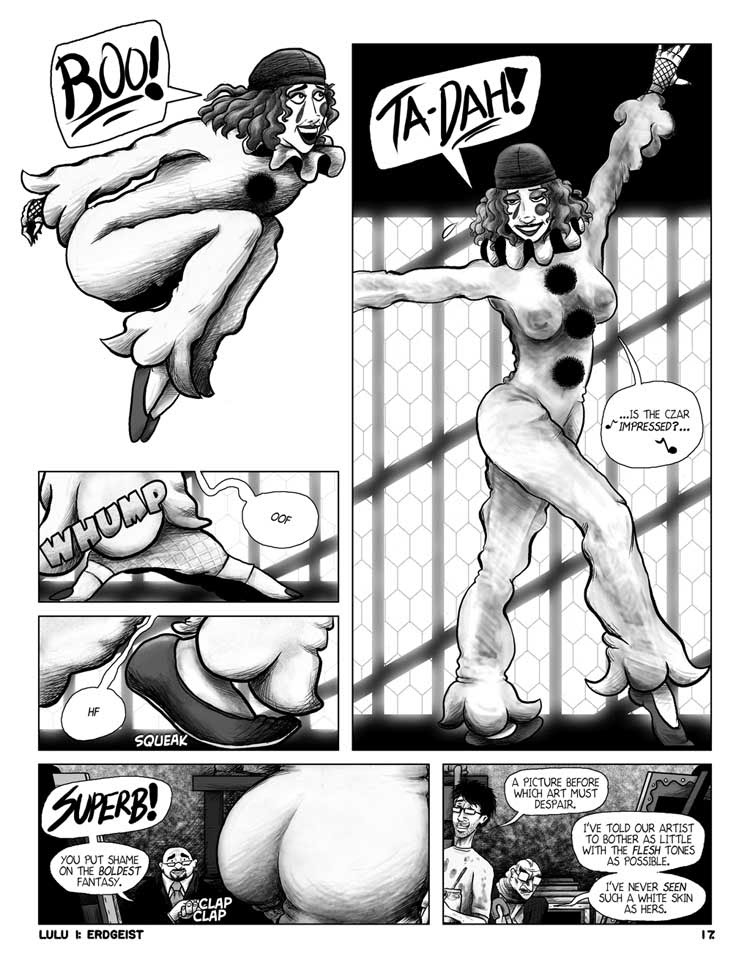 Can't Believe I Forgot To Mention I Got Mentioned...

, a history of the genre and a very good one. I'm particularly stoked about being in it--regarding my work back with THIS SICKNESS

as it was at the (now sadly defunct) adultwebcomics.com, along with others like Isaac Priestley and Jessica Fink--because the first volume

was a great resource for my own work in the genre. And this also has an intro by Alan Moore!(and a very good section on LOST GIRLS

) Probably the only time my name will appear anywhere near Alan Moore in a print run.

I was also happy that it was complimentary(though with a few misspellings). They talk about Rosa & Annalisa, as well as Vladrushka, and I even get compared(in a mildly favorable way) with Eisenstein, which is cool. In any case, this and the first volume are invaluable histories. Get 'em.


Labels: it's all about ME, my comics, smut, this sickness, vladrushka

Arizona is fighting hard against Florida, South Carolina, and Texas for who can bring the most outright crazy to the table, with their new law mandating that police(who, I'm sure, really don't want to be saddled with also being INS deputies--consider the caseload and lawsuits this will bring, and that's not counting that nobody will want to go to their state) have to stop anyone who looks like they might be an immigrant.

I do not expect anyone to be stopped because they look French, English, Swedish, or Canadian.

A number of perfectly legal citizens will be harassed over this. If you immigrated here legally, at least there are such things as papers. But what if you were born here? Do you normally carry around your birth certificate with you? And then much more absurd, but sinister, ramifications in a prank pulled by an Arizonan on his neighbor, who wrote, in tape "I AM A MEXICAN, PULL ME OVER" on the poor fellow's car. That's obviously silly, but consider the same technique applied differently and more seriously. That's how witch hunts happened. You just need people to have an incentive to inform on their neighbors.

And this is such a boon to exploitative employers--ones like the Wal-Mart that locked its illegal immigrant workers in at night--and other human traffickers. Now their captives will be afraid to go outside under most circumstances, because they can be arrested just for looking Latino and having no papers.

Why has Arizona, despite the rage and confusion this will cause, decided to turn themselves into East Berlin? A law that's too much even for Tom Tancredo? A law which, by the way, prominent white supremacists now brag about having written?


A number of reasons, mostly to do with cynical short-term political gain at the expense of Latinos. But I'd just like to sketch out one which, for the GOP, if it wasn't an intended result, it's certainly a lucky benefit for them. This will depress Latino voter turnout, at a time when the GOP--which had done well for a while in cultivating Latino voters--have been systematically alienating said Latino voters. In Arizona, it was enough to swing four counties that had gone for Bush to Obama in 2008, when McCain--from Arizona--was his opponent.

Right now, the GOP neither feels it can depend upon Latino voters, nor pursue their present incoherent nativist ideology without feeling free to throw Latinos under any number of buses. In such situations, you want to minimize the potential voter turnout of the group you've pissed off. Arizona is 30% Latino.

Obviously, illegal immigrants cannot vote. But again, what do you think will be the determining factors for initial probable cause when police apply this law? Could it be that someone looks Latino, or speaks with a Latino accent? Or simply that someone speaks a foreign language in public? Or will it just be Spanish they target?

It's very vague and very broad and invites arbitrary application. And that's just what will make lots of Latino voters deem going to the polls--despite plenty of reason, especially now, to vote this governor, and others, out--not worth the bother.

It's hard enough to get people to go vote in the best of circumstances, but when you apply to a group of people the deterrent that they will be harassed at or on their way to the polls--and polling places will be very convenient central locations to ask for papers--then you minimize their impact in the vote.

This will obviously either be sued away or ruled unconstitutional. But not this year, not until after November at least. And that's all that's needed to marginalize Latinos out of the process, which is why the Republican and non-Latino governor happily signed it while obviously not giving much thought to the harm it will cause, not to mention the burden on the police.

This will hurt the GOP in the long term, but they have never bothered themselves thinking except in the most optimistic terms about their future. 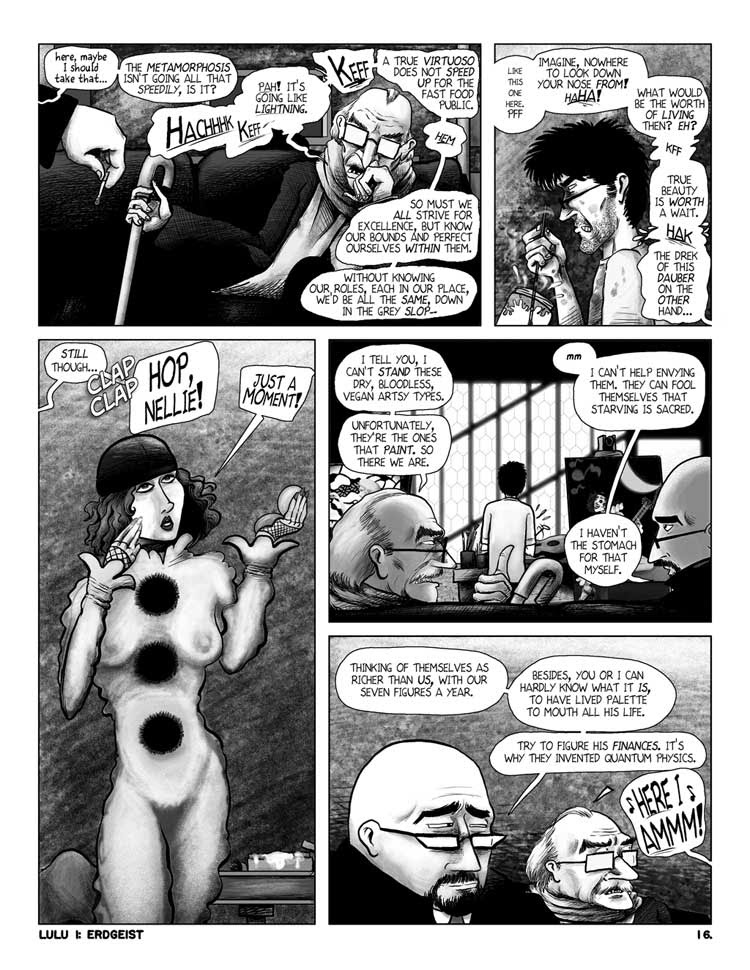 
Labels: lulu, my comics, this sickness

As they themselves pointed out, Muhammed already appeared on South Park, and nothing happened. Don't expect this clip to be available much longer.


But that's okay, because we have this archive of images of Muhammed by Islamic artists. Here's one. 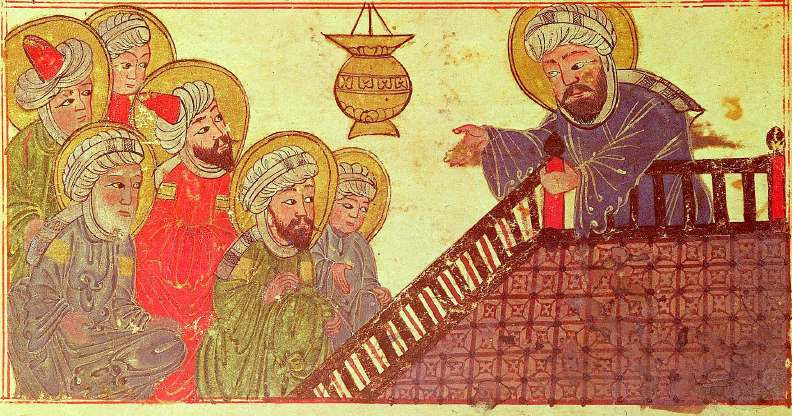 And here's another. This one from the 20s, from an Algerian postcard. Quite nice, actually. 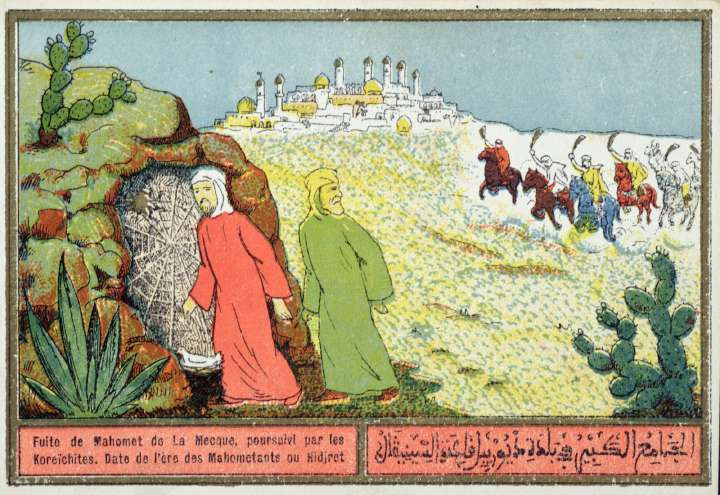 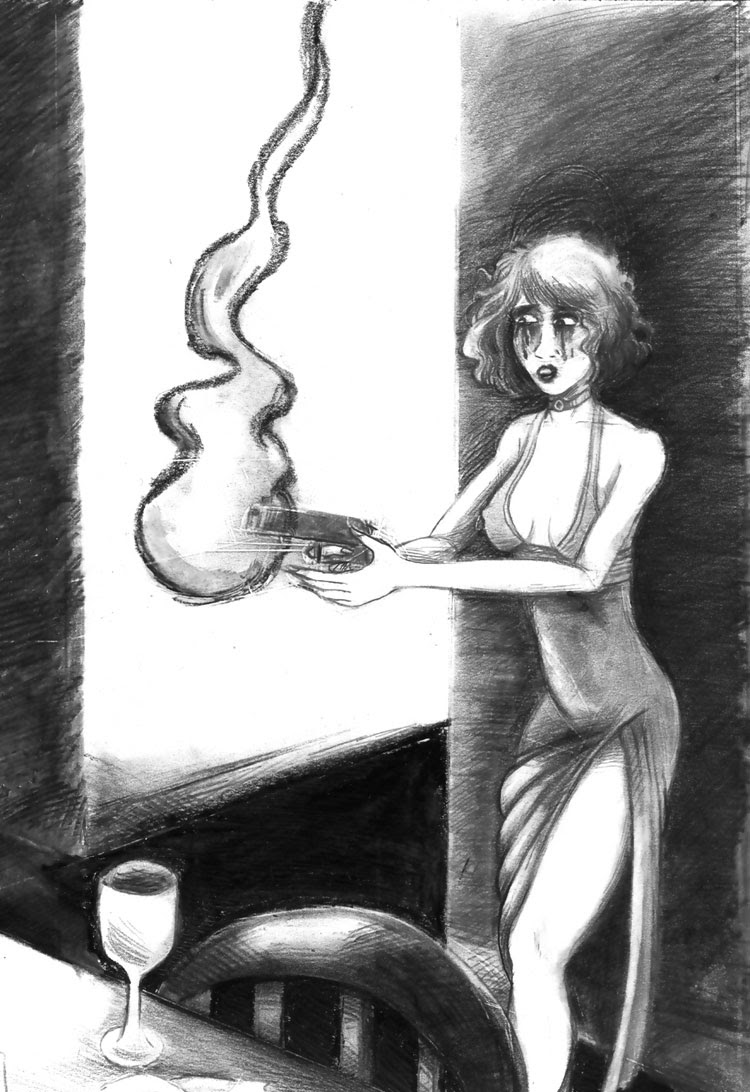 ull-pencil and litho crayon Lulu drawing, with some chalk (9"x 12", vellum bristol), that may become a cover down the line, depicting a much, much later scene.


Labels: lulu, my art, my comics, this sickness

The GOP knows it can't do more, ultimately, than slow down legislation. So instead, they threaten filibusters over aspects of legislation that don't exist, then take credit for removing them and pose as protectors of the people on the basis of utter fiction.

We saw this with the "death panels" lie, which worked. This time, it's the idea that the new bank regulation bill will institutionalize bailouts when it explicitly forbids them. The GOP is banking(you'll excuse the term) a lot on its base not bothering to do more than take their fractured word on these things. And an ineffective Democratic communication machine that's always late to explain these simple things, sadly, giving the Republicans a chance to pounce in with their lies.

Saturday! LULU, Chapter 1, page fifteen, where Lulu is still changing and trying to figure out how to get into this stupid costume, and Schoen & Goll are still talking about her like she's Goll's new sports car. Oh, and she's still starkers. Apologies to all those who are offended. 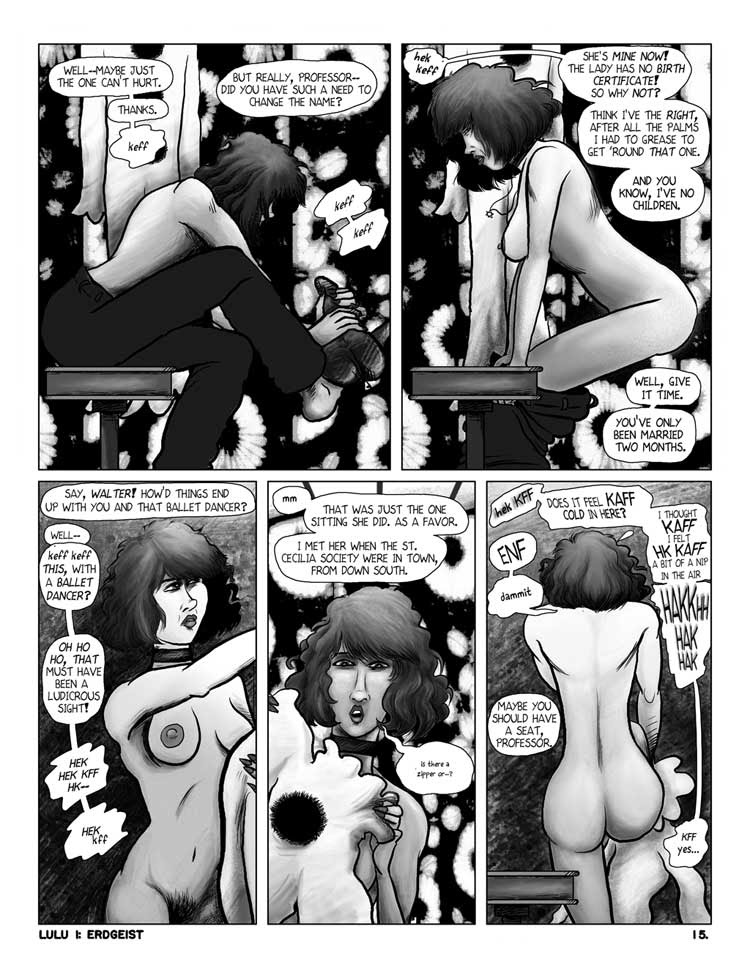 Saturday! LULU, Chapter 1, page fourteen, where we enter the possibly NSFW part of our story. Warning to the overly sensitive: there will be a lot of this from this point onward, and more. 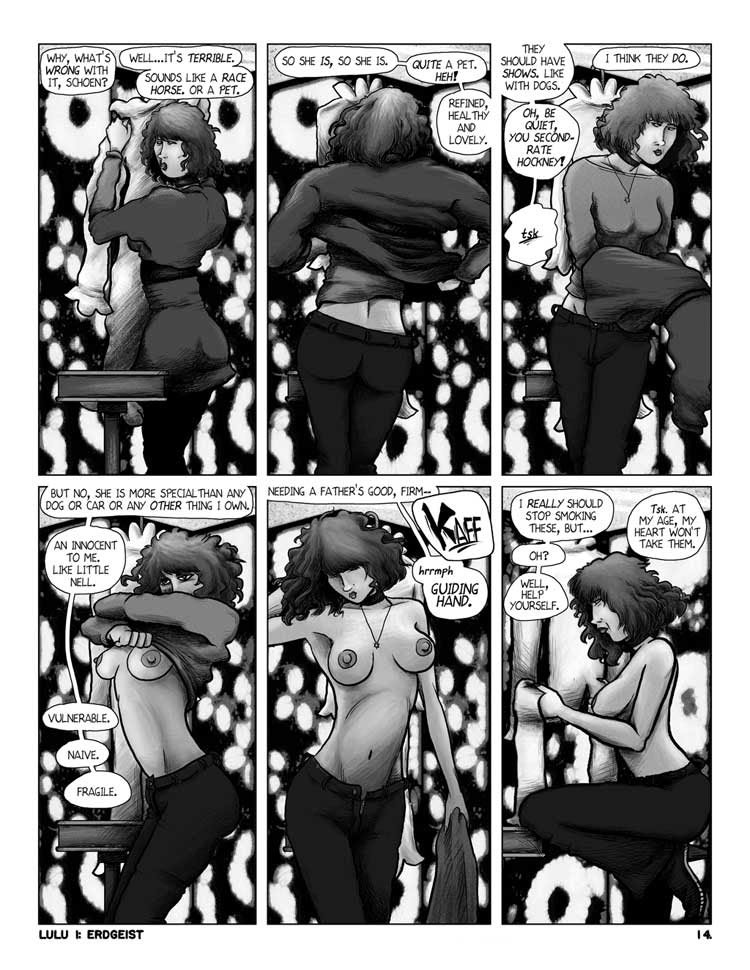 (You'll find the whole chapter, as said before, in THIS SICKNESS #6--available only at Createspace & Amazon)

You'll find the whole chapter, by the way, in THIS SICKNESS #6. 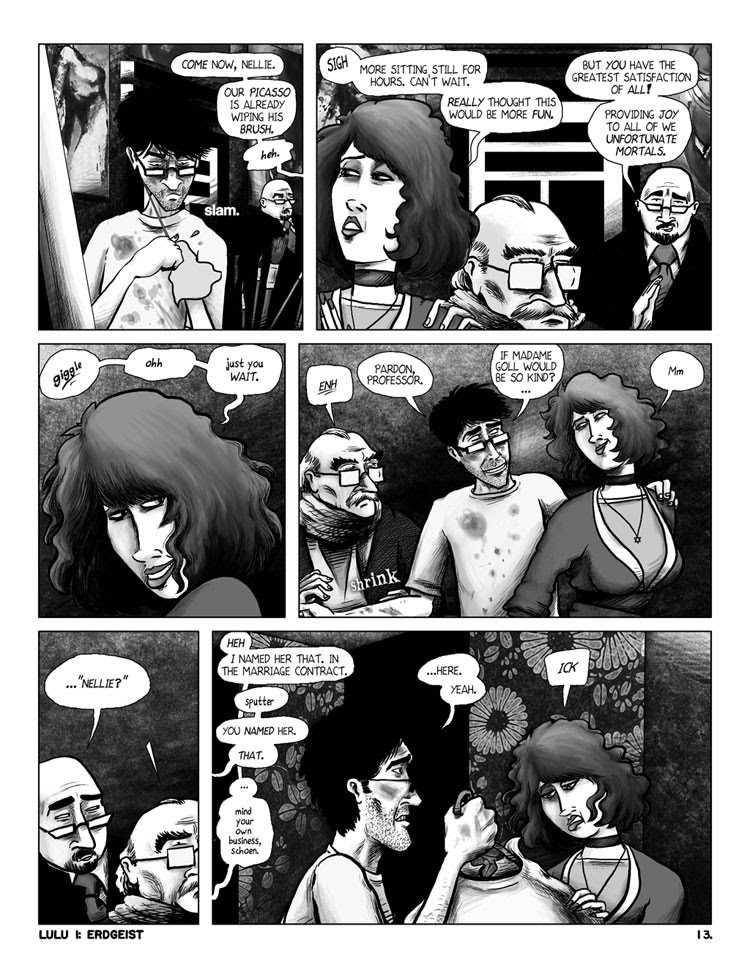