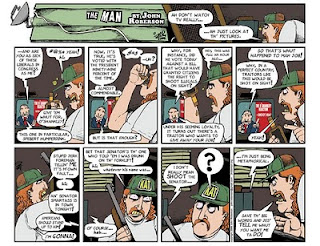 Just putting together the new issue(and the first in a year, sorry about that) of This Sickness, which will include the first chapter of Lulu in full, as well as sketches and notes about the project. It will also include the political-satire strip I began work on in 2006, The Man,(see sample at left) five pages of it. I'm preparing more material and think I might continue it in some form, because it appears the stuff I thought was a gross exaggeration back then is now reality. I have a few other things in mind, like some stuff that never ended up seeing print because of the abrupt way I ended Plastic, as well as some collaborations that haven't yet seen print. But let us see what fits before I announce that.

Watch here for the release announcement. It will be available exclusively through my Cafepress online store, as are the other five to date(which differ from this one though, in that those are all "over 18 only," while the new issue will just be "mature readers." Though will have some nudity), so go here to purchase. Buy several!

Right now I am also deciding on a cover design, one more of a type I've used a number of times before, which is abstract design+color+female figure. This time using a lot of pink, magenta and violet because I don't usually feel comfortable with those colors, so I thought I'd try them. And also, if you look back at the other five This Sickness covers, I tend to prefer monochromatic motifs on covers, and don't like to repeat anything till I've finished a series. I can't decide between the four designs below, but I'll be damned if I do that alternate covers scam.

So here they are. Feel free to tell me which you prefer. My own favorite? The kind of psychedelic/candy-looking one. I can't decide if it's too garish, or if perhaps I want to go for garish. Loud, yes. 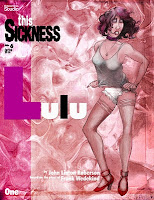 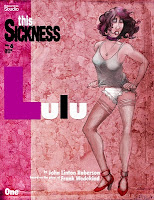 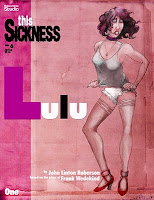 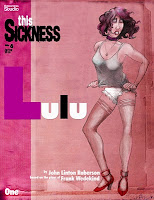 is in my stereo. And it's really quite amazing. A large number of vocalists even for them, including Hope Sandoval and Damon Albarn. You should definitely get it. I think I've listened to it about 30 times since Saturday. Here are a couple of examples.


"Atlas Air"--This is live and it was called "Marrakesh" at the time.


Labels: it's all about ME, lulu, music, my comics, this sickness, trip-hop