Or, according to Gibbs, he already has, in advance of his speech tomorrow, that will not be asking our support, but merely informing us of the escalation of 30,000 in Afghanistan(which will leave our remaining ready troop strength within the US at a little more than 20,000; hope for no natural disasters of any great size!).

Nevertheless, I added my pathetic little e-mail to the ones I hope you and others are sending:

Please do not go through with this escalation. It will result in nothing good, and rather than proving your strength in some misguided way, it will produce an inevitable failure that will weaken you and strengthen all your enemies. There is a reason Afghanistan is called "the graveyard of empires." I voted for you to reverse the damage Bush caused. You are perpetuating it, and making me feel like a fool for supporting you. We, your voters, will remember this next year and in 2012, and will no longer believe in you enough to support you, if you commit the same error that LBJ did in Vietnam, and you're about to. America needs to be fixed. We cannot afford this war, either financially or spiritually. Please stop listening to your enemies. Listen to your supporters. Do not escalate.

Thank you for your time.

Police think they're closing in on the murderer of four policemen in Lakewood(which, despite news reports, is not Seattle and not even in the same county; another story has it in Parkland, and the Rachel Maddow show claims nearby Tacoma) that was set free by Gov. Mike Du--I'm sorry, I mean Huckabee. The fellow in question had a 95-year prison sentence commuted by the governor almost ten years ago. So Huckabee has some cop blood on his svelte hands.

However, it must also be asked why he was released just last week on bail from the Pierce County jail with eight, count 'em, eight felony counts facing him, including "third-degree assault on a police officer, and second-degree rape of a child."

Update: he was shot dead this morning by a lone cop. And was apparently quite the freaking lunatic:

Clemmons was (previously) accused of gathering his wife and young relatives around at 3 or 4 in the morning and having them all undress. He told them they need to "be naked for at least 5 minutes on Sunday," a Pierce County sheriff's report says. "The whole time Clemmons kept saying things like trust him, the world is going to end soon, and that he was Jesus," the report says.

A short and mean review I wrote of Atlas Shrugged, at Helium. And do be sure to check out my other articles while you're there, because I get paid if you even click on 'em!


To be found here. Or below.

As it's a work in progress, you won't see officially posted pages till these are finished. But small sample versions of the pages in progress are added to, and updated in, this gallery.

07 November 2009
New Cartoon A submission. If anything comes of this one*, you'll know more. 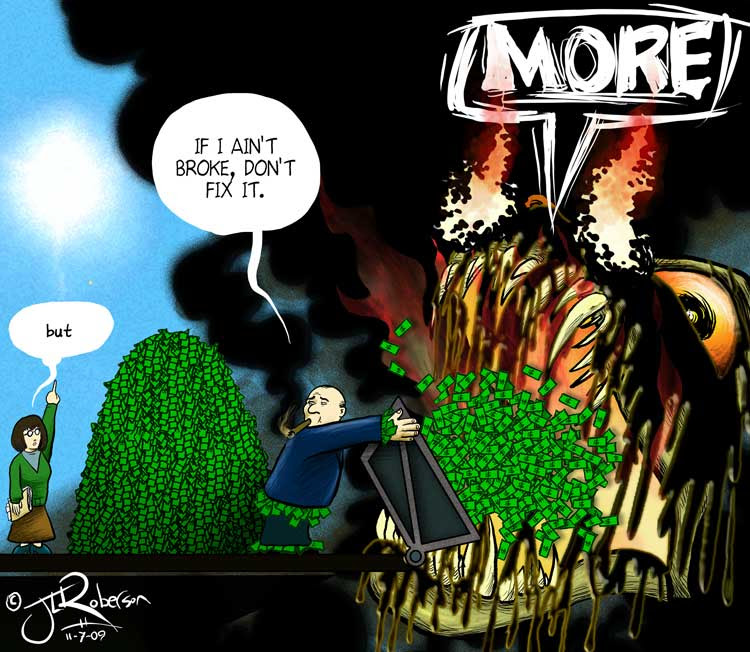 *Update: What came of it.

Labels: my art, my comics

The work of one Drew Oliver. I fucking love these, though I can't afford to buy one, but hey, my mom was a nurse. If I did get one, it'd definitely be either the largest-size Common Cold or E.Coli.

Have a look. (and if you order, mention who sent you)

What I've been working on lately, which some of you have seen, but in any event, here's a link to to 10 pages of it.

Here is an interesting, and very critical, article on someone whose cult I was in about 10 months in high school, Ayn Rand. Apparently there are two new bios of her, mentioning fascinating and telling new facts such as her benzedrine addiction, her writing praise for a serial killer which sounds a lot like the way she describes the "ideal men" in her books, and much more that explains where her work is really coming from in a way I've been saying for some time. Though I didn't know about the drugs and morbid hero-worship. A snippet:

Her diaries from that time, while she worked as a receptionist and an extra[note: that would be the 20s], lay out the Nietzschean mentality that underpins all her later writings. The newspapers were filled for months with stories about serial killer called William Hickman, who kidnapped a 12-year-old girl called Marion Parker from her junior high school, raped her, and dismembered her body, which he sent mockingly to the police in pieces. Rand wrote great stretches of praise for him, saying he represented "the amazing picture of a man with no regard whatsoever for all that a society holds sacred, and with a consciousness all his own. A man who really stands alone, in action and in soul. … Other people do not exist for him, and he does not see why they should." She called him "a brilliant, unusual, exceptional boy," shimmering with "immense, explicit egotism." Rand had only one regret: "A strong man can eventually trample society under its feet. That boy [Hickman] was not strong enough."

Not at all unlike how she describes John Galt or Howard Roark.

I grew up in a place where we were required to read Rand in school, which I think must have resulted from some school board compromise, because we had to read ANTHEM, but we also had to read CATCHER IN THE RYE. But at the time, a nerdy boy who hadn't dated yet, had undergone a certain amount of trauma, and generally felt very isolated, I found myself quite attracted to Rand's writing, and found(and still do, frankly) Holden Caulfield to be an uninteresting, whiny prep school boy with little to tell me. The writer's reference to "mini-malls" is only partly accurate, as it was in a bookstore in a local mall that I found her books. I was not even slightly right-wing and never have been.

I suppose it was the fact I was in the South and she was atheist that I had a hard time seeing how much of it was right-wing. She was controversial down there solely on religious grounds; in the South in the 80s that was enough to be rejected. I was exactly the target for her writing, and the skewed atmosphere of the South made it feel rebellious to read her.

And I did, every one of them, even the Introduction to Objectivist Epistemology. Even the doorstop that is ATLAS SHRUGGED(and unless you're as much a masochist as me, I do not recommend it. Did you know the climax has to do with the use by the altruists of a lethal infrasound machine, for no particular reason?).

But what I found disturbing and tried to look past before I couldn't anymore was how she describes everyone that is not the hero, or a worshipper of same. My use of the word "worshipper" is advised: it's the word she used herself. She said that men, at their best, were heroes, and women, at best, could only be "hero-worshippers." Like Dagny Taggart, or Dominique Francon, the latter of which comes to her worship of Roark via being unambiguously raped. Which Rand, an apparent admirer of sociopaths, would believe was Roark's right to do. Does believe that, if the fact that there's no indication in the text the hardly-subtle Rand disapproves of this act. Quite the opposite--she seems to think it's very romantic. You rarely see as much emotion in her work as the moments like that one. (in that I suppose she's simply a bestseller-writer)

But more than that, the way she describes the masses. The author of the article mentions many. He doesn't mention the workers who blindly and maniacally destroy the plant of Henry Rearden, who are described(by a stock, dying "da kid" character) as like marauding ants.They don't destroy the plant for any particular reason. It's just that without Rearden's leadership they become animals. There's also the strike the writer mentions, and the train is running on Rearden Metal, a symbol of all the "parasites" want to steal in the book. But Rand acts like strikers are terrorists, and believes most people aren't much better than animals. It's pretty obvious that, knowing not everyone can possibly get to the top, even those of equal talent, Rand assumes that most would be the servants of her elite. Not by force, by natural default. If not for the do-gooder altruists ruining everything.

This in a world, in ATLAS(published in the late 50s), where radio is the predominant mass medium and classical music is popular music, an opera called "Phaeton"(again, not subtle--and interestingly, Rand's composer changed it so Phaeton survives. Keep in mind, the whole point of the story is Phaeton steals his father Apollo's chariot. Steals it. I guess it's not theft if Rand says not) is as big a deal as a pop album would be now. In the Fountainhead, the most influential cultural and political figure is Ellsworth Toohey, an architecture critic. I suppose it would be easier to take her seriously if she spoke of anything like a real world, but she does not. She creates her own world, stacks the deck so her arguments will work, and then reapplies these junk philosophical "findings" to the real world. In THE VIRTUE OF SELFISHNESS, she writes an entire essay avoiding a question a student asked her, the classic "Would you save a drowning man if it meant risking your own life" with nothing but contempt for a mindset that would even be thinking in those terms. (For the record, it happens. My great-grandfather died trying to save a drowning kid) This tells you all you need to know.

I would say to the author of the Slate article though: leave poor Nietzsche alone. He would have spat upon her work. He gets unfair blame enough for the Nazis, don't drag him in with the Randroids as well.