Considering Senator Jeff Sessions himself was denied a judgeship on the basis of his demonstrable racism years ago(which makes me wonder why someone with such a strong reason for revenge is on this panel), it takes some mighty big balls for him to focus so hard on what he calls Sotomayor's racism. It's like letting Al Capone onto a panel investigating organized crime.

It takes even bigger balls for him to then imply that another judge's opinions on cases that aren't even relevant to hers, somehow relate to hers because she and that judge are both Puerto Rican. That because they're both Puerto Rican they should vote the same.

The only way that line of reasoning makes sense is truly disturbing. In what it reveals, which is that, in letting Sessions be their attack dog for this talking point, the GOP has become the old, wetbrained, incoherent drunk sitting in his own piss in the unlit back of the barroom, screaming bitter obscenities at no one in particular, till someone gets sick of him enough to put him out of his misery.

Also revealing personally about the twit, Sessions. Think of it. He suggested Sotomayor should have judged a certain way in a case because another Puerto Rican judge did. Hmm, Sen. Sessions, why's that? Do, say, white men do that? Actually, if they're you, yes. He once called a white lawyer a disgrace to his race because he represented black clients.

So Sessions believes it's all about the genetic team! Racial loyalty trumps ethics, professionalism, and decency. In his mind, he's revealed, whites think the same as other whites, blacks same as blacks, Latinos with Latinos. It's an interesting world, this parallel place called Earth-GOP. And we see in others the faults that are worst in ourselves, and so with this chinless little freak. Or, as a great Texan once said: 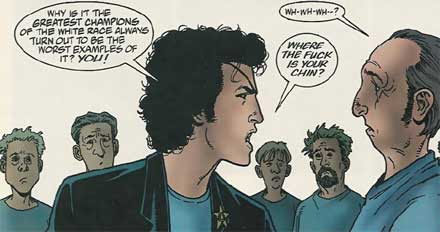 I wonder when Sessions will come to the hearing wearing a KKK hood(he said he thought the KKK was okay till he heard some smoked pot; no, really, that's one of the things that sunk him in 1986), at the rate he's going. And possibly try to rile her by asking if she feels threatened. And hey, Sessions, thanks again for perpetuating the stereotype that Southerners are racist pigs like you.

Watch the video and feel the whole room around him cringe. The man is an idiot, asking childish and contemptible things, and I have no idea why the GOP thinks it's a good idea to talk this way. Surely there must be one or two left in that party that wants Latin voters in the future. Seriously, is the coarsest, most vulgar, pandering, croaking racism all they have left?

Comments:
Good grief, on top of everything else the man talks like Deputy Dog!