Having seen recently online a gushing fanboy letter written by a young Warren Ellis (the subject was Alan Moore, but I can't recall the comic), I felt I would forestall similar future blackmail and post here two letters I wrote to Grant Morrison and Garth Ennis in the 90s, that I came across when spring cleaning recently. Thought they were worth a chuckle.

Strangely, both letters were published in the 13th issues of their respective comics. Looking at these for the first time in forever, I'm particularly struck by how arrogant and rude I am in my letter to Ennis, and how good-natured he is in response. I would have punched me if I'd later met me in person. Which he did, actually. Meet me, I mean. No punching.

Because, a follow-up to this was that, some months later, both these guys, plus Warren Ellis(whom I did not know of then and ignored, and I've felt stupid ever since), Steve Dillon & Matt Hollingsworth, showed up at San Francisco's Comix Experience. I was such a fucking fanboy, I was first in line, and in my brief talks to both of them, I followed up on these letters. In Morrison's case, he was speaking Scottish, so I couldn't understand. In Ennis' case, he recommended a book on the myth of John Wayne by Garry Wills, which as it happens I was already reading. Both nice as hell despite me, I'm sure, being every bit the twat that's reflected in these letters.

Luckily, this was right before letters pages were phased out, so there are no more. Well, except about a million ill-considered message board posts I've forgotten, I'm sure.

Anyway, let my cringing commence. Click on each to read. 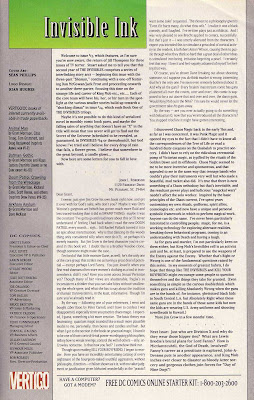 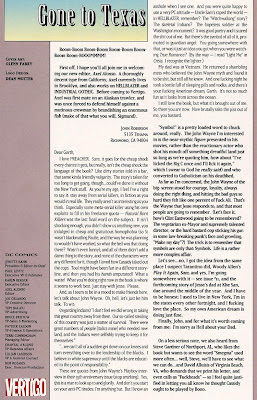 
Labels: comics, it's all about ME, my influences