A comics adaptation of the Frank Wedekind tragedy. Now available in print! Click here to buy! Now also at Comixology!
I Didn't Write That!
18 May 2009
Rumsfeld's Tracts
Or rather, the progress reports on the war in Iraq with which Rumsfeld kept Bush calm and confident. Said progress reports looking like fundamentalist Christian tracts. Full story here. Slidehow of said tracts here. Seriously, you will not believe these were put together by professional government employees, but they were, and they look like something you'd find on the bus. Here's one cover sheet. 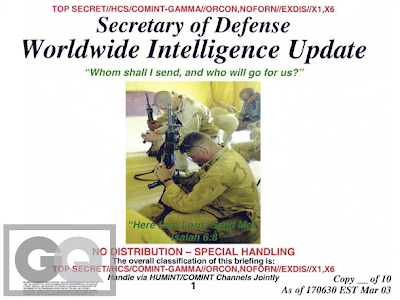 No, seriously. This is real and was given to the President of the United States. By hand, by Rumsfeld himself often. Here's another. 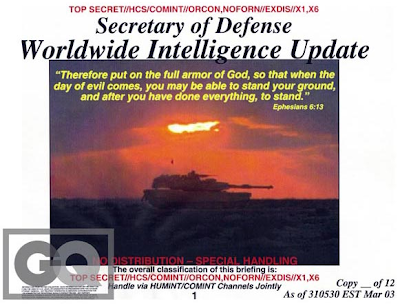 Again, really. This is real.

And below, some video.

And what a Baptist minister of some respect and prestige thinks. Money quote: "It's a prostitution of religion."

And this doesn't even reflect Rumsfeld's actual beliefs. It turns out this was just a cynical effort to manipulate Bush, and indeed, for Rumsfeld to kiss up to him. This sort of thing, it appears, in look and in tone is what appeals to Bush. What does this, by the way, now confirm about the level of Bush's intelligence, taste, and fitness for the presidency? It's not that it's religious, though it does now confirm that Bush, at least, thought this was a religious war. It's that this is the sort of thing you use to get trailer-park folk to get born again. I mean, come on, look at it. (not that this is atypical material within the Armed Forces.)

The Bush administration looks more frighteningly ridiculous the more that one finds out about it. A bad president and administration I can almost understand. But it turns out that we've been led by a Mayberry junta after all. Nothing they did looks worthy of calling "presidential," good or bad. (Whatever I might say of Nixon, Reagan, or the first Bush, at least you could use that word to describe them without laughing hollowly)

Isn't it obvious that this last eight years were miserable, dark insanity, and indefensible?

At what point does the right wing realize how foolish and wrong they were, and are, to defend these people, and decide to be quiet and think awhile?

Oh, and why are we hearing all this about Rumsfeld? Because his former colleagues are throwing him to the wolves. More here: