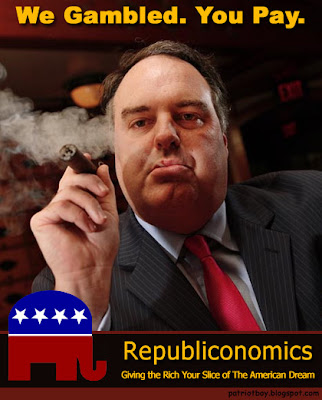 At least through the end of last month. What happened 'round then with Freddie Mac?

And this is yet another McCain lie, as he said his campaign manager had nothing to do with the lobbying firm Rick Davis worked for, the "Homeowner Alliance," since 2005. Even better, as with all his lies, he invited the press to check on it. Why does he never think they'll take that invitation, when they have every time? Does he mean it as a dare? We know that worked well for Gary Hart.

The purpose of this firm? To deregulate the very industries that brought us to this pass.

So McCain's campaign is run by the same interests that now threaten to bankrupt us all. I hope all the old people whose retirement money is evaporating are paying attention. You know, those old people who always vote in higher proportions than any of the rest of us?