Nothing encapsulates it better than this little prick in this commercial you may remember from about 2002-2003. Ignore the otherwise wonderful Who song ruined here.

Please note: he wins by cheating; and look at his little road-ragey face when he does. The message: "Fuck you, I'm America and I gots me a big car."

McCain is humiliating the Republican party and ensuring their catastrophic loss on purpose. Remember, the party has never liked him very much, and till Bush's presidency(oddly enough, as the two men hate each other), was never much of a party-line voter.

He's well aware too that to have someone his age in that office, with the stresses the next president will be facing, would be terrible for the country; he'd probably barely make it through a first term.

And anyway, would you want to be the one who has to mop up Bush's mess? Maybe they're all doing it on purpose.

29 July 2008
What Does A Murderer of Churchgoers Read?

So I suppose my next question is: when will we be banning these three hatemonging media personalities?

Down the Tubes
Alaska GOP Senator Ted Stevens(he of the "series of tubes" and the Bridge to Nowhere) has been indicted for taking $250,000 of undeclared gifts--i.e. bribes-- from--oh do I really need to say it? The oil industry.
Mostly renovations to his home, as it happens, about which he was apparently very demanding.

26 July 2008
I Love Teri Garr
See why in this excellent Onion interview, in which she has an amazing number of funny, angry things to say about sexism in Hollywood. Considering how often she was cast as "The Wife," it's not surprising.

[On Tootsie]
They put a man in a dress, and he's supposed to know what it feels like to be a woman. But of course he doesn't. I think what Dustin [Hoffman] says is, "I realize now how important it is for a woman to be pretty. And I wasn't pretty." God! That's all you realized? Jesus Christ.

...Steven Spielberg always said, "To play the dumb blonde, you have to be really smart. Except in your case." One of his goddamn jokes. Bastard.

A special executive committee has also been formed to draft the country's final words.

In response to critics who claim Bush is a lame duck and plans to pass the responsibility of helplessly watching the collapse of society onto the next president, Bush said he is "still the commander in chief," and remains dedicated to solidifying America's legacy before the darkness takes hold.

"I am committed to making this the best damn Swan Song the world has ever seen," said Bush, after enclosing a copy of the Constitution and a recipe for corn dogs in an air-tight titanium capsule to be placed just across the Canadian border. "I know this looks like the end—and it is—but I intend to go out with a bang. Now, who's with me?"

Generosity Comes In Many Forms

Some of the story inside, featuring (and by) Bob Haney and Jim Aparo, here.

They must do the whole thing.

An alcoholic longs for the respect denied him.

You know, seminal American author John Cheever and I have a lot in common. He needed to drink a fifth of scotch before he had the courage to utter a word to another human being, and so do I. Much like Cheever, I'm completely blotto by 10 a.m. because of a deep, withering fear that my family will eventually discover my bisexuality. And, to top it all off, we were both born in Wollaston, Massachusetts, if you can believe it! But just because he's one of history's finest short story writers, Cheever's epic benders are considered delightful, whereas I've just got a "serious problem with alcohol."

What a bunch of horseshit.

You wouldn't believe some of the outlandish and totally inappropriate things my drunkenness has caused me to do. Dark, crazy stuff. But guess what? I didn't write Falconer, so I'm a disgrace to everyone who loves me. It's discriminatory. Cheever abandons his wife and children for months at a time to drink himself near to death, and he's discussed joyfully in college lit courses. I do the same exact thing, and I'm denied visitation rights.

Radovan Karadzic Will Be His Own Lawyer

I say: go for it, Radovan. That's a time-honored strategy that will get the result you most deserve.

Happy Tree Friends: "This Is Your Knife"

At least it looks right. But I'm entirely prepped for this to suck the dicks of dead dogs, so I'll be easy to please.

...that I have spoken of before was fed anew today by these photos of her in a bikini. And for a woman in her sixties...well, good God. Yum. Proof, along with Diane Keaton, of what avoiding plastic surgery and simply keeping fit results in.

Most young actresses in Hollywood: you should look so good.

"We have no safe seats now," say they. Awww. Poor babies.

Well, you know what? The fuckers had a choice. The American people or Dubya.

And they almost all made the wrong choice, and some paid for this in 2006. Most of the rest will pay for it now.

That's what happens, assholes. Eat it.

What's those sayings their darling drug addict water-carrier Rush Limbaugh is so fond of? Oh yeah...

...who beat a 60-year-old man nearly to death just for watering the plants in a traffic circle.

Which doesn't shock me. The sort of passive-aggressive babymen that seem to predominate here likely have a lot of buried rage. And besides, he was interfering in traffic, right?

Jackson said at a news conference Wednesday that he had said Obama's speeches can come off as speaking down to black people and that there were other important issues to be addressed in the community, such as unemployment, the mortgage crisis and the number of blacks in prison.

He said he was not aware the microphone was still on.

Jackson declined to repeat the comments, but said he decided to apologize publicly after hearing from Fox News that it would air them.

In an interview with The Associated Press earlier Wednesday, Jackson said he didn't remember his exact words, but said he was "very sorry."

The Fox News program "The O'Reilly Factor" aired Jackson's comment Wednesday night, including a slang reference to his wanting to cut off Obama's testicles. The report bleeped out the slang but made clear what Jackson said with subtitles.

Keep going, Obama! Without even raising a finger you're making them jump right off a cliff. All you have to do is make them feel the irrelevance they've represented for ages, just by being there.

Jackson's days as the leader of black America are over the minute Obama is elected, as are Al Sharpton's. And they know it. Last thing they ever wanted was an elected leader stealing their thunder.

When The Veil Comes Off

...you understand why Muslim men want to keep them covered. 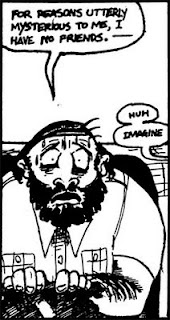 But they certainly take it seriously, more so than the English language(which I'm sure many of them would like to make official). Bill Maher writer Chris Kelly passes along some choice bits:

"YOU DID NOT BILD YOUR COMPANY ON HOMOSEXUAL PEOPLE! IT WAS BUILD ON FAMILY VALUES! MAN,WIFE.CHILDREN!MOSTLTY CHILDREN! THEY DON'T COME FROM HOMO PEOPLE!!!!!!!!!!!!!!!"

"What next, Adam & Steve in the children's happy meals? i WILL not condone the Corp. of Mc Donalds to force me to shop where it is not in lign with my believe in God and HIS scripture..."

"I have stopped at my last McDonald. If you support homos, that is fine with me. I do not have to eat your burgers. Maybe there are enough homos around to keep your arches open."

"I suppose next the playground will be open for pedifiles in order to not offend them."

"What's next? Support for the Man-Boy Love Association! This shall not stand!"

"The McFaddin Family will vote with our Money and Feet and take our business elsewhere! You can stuff your Happy Gay Meal and Happy Gay Agenda where the Sun don't Shine!"

"If the McDonald's heirarchy thinks we'll buy their burgers and support deranged homosexual activists who force their lifestyle on innocent children in the public schools, they had better think again. Their burgers now have a smelly odor to them."

"You advertise straight to children (Happy Meals). Can anyone say pederasty? This lifestyle' you embolden is really a deathstyle!"

"The only thing you'll be cooking is yourselves, for eternity."

"the next thing you know RONALD will be molesting our children. No big macks for this family."

"Are you also going to support open activity between man and beast?* You are helping to open the door to bestiality, sex with children, plural homosexual marriages and the list goes on!"

"I recently saw two young teenagers making out. I figure McDonalds is no longer my kind of place. I think the sixteen year old worked there."

Who wouldn't take these people seriously, I ask you?

The best case that can be made against the Christian Right being allowed any cultural or political power at all ever again(they just had plenty, and, of course, had no idea what to do with it except try to save the life of a dead woman) is anything they say if allowed to just keep talking.

*As opposed to the covert activity between man & beast so beloved by Red America, apparently?

Also, is Red America that color out of embarrassment?

McDonald's has done something brilliant:

For just $20,000, they've chased off all the crazy people who hang around McDonald's sputtering and ranting and making me not want to eat there.