Today Now!: How To Pretend You Give A Shit About The Election

The Department of Evil has some important news for you.

Originally established by an act of Congress in 1953 and granted broader powers and funding in 1986 under the second Reagan administration, the Department of Evil has been an occasional source of controversy. Its 1993 And The Streets Shall Run Red With The Blood Of The Innocent initiative was highly criticized at the time by moderates, who thought the department's agenda overly harsh.

"I Will Possess Your Heart"

In the grand Stalker Love song tradition of "Every Breath You Take," "With Or Without You"or "the One I Love"...all great songs.

If he wants Bill's support, that is.

If you were Obama, would you want his support now? The man has turned into a bitter ol' Nixon before our eyes.

Its fertility rates have fallen below the "replacement rate."

Breaking the legs of babies.

A baby boy had both legs broken by supporters of President Robert Mugabe to punish his father for being an opposition councillor in Zimbabwe.

Blessing Mabhena, aged 11 months, was seized from a bed and flung down with force as his mother, Agnes, hid from the thugs, convinced that they were about to murder her.

She heard one of them say, “Let’s kill the baby”, before Blessing was hurled on to a bare concrete floor.

Blessing, who may never be able to walk properly, was one of the youngest victims of atrocities against the opposition party Movement for Democratic Change in the run-up to last Friday’s sham presidential election.

This does not bode well.

A Terrible Message To Children Everywhere: Santa Is Dead

Santa Claus has drowned, and it's the fault of every grown-up you see.

That's right, the North Pole is to be free of ice this summer. Oh, wait--it is summer.

And by the way, without the ice up there, the water is darker, and absorbs much more heat that would have been reflected back into space before. Heat, from the sun, above and beyond anything you're used to. Which in turn makes everything warmer down south, because that area is where the cold air is mostly made. It's been referred to as the "world's air conditioner" for this reason.

So it's going to be a pretty fucking hot summer with massive superstorms. Enjoy being cooked. I'm in Seattle now, where it's rarely above 70, though it's looking to be in the 80s this weekend. But around here, that qualifies as a heat wave. In any case, this will be the first summer I haven't spent in Chicago since 2001, and I'm very happy not to have to boil alive each day. Chicago's heat is every bit as punishing and violent as its cold, and the city hasn't a whole lot in between. I'd drink water and have it fall right out of every pore in my skin in one continuous stream. Like my skin was having a piss. God, I hated Chicago.

Of course, there is the fact that Seattle, being a city defined pretty much by its relationship to water(funny thing on the West Coast about water--always either too much, or not enough) will be particularly susceptible to rising sea levels. So I guess I'm not immune.

If you're in the 20th Congressional District of Florida, that is. The socialist candidate, an old friend of mine and, frankly, I just want to call his bluff and see how he'd do in the job. Which would be splendid. I know there's no one alive with whom I've had more political arguments; he's a sharp cat.

And contributions are being accepted here.

Uh-oh, the hillbillies noticed they might soon have a black president.


U.S. Finally Gets Around To Closing Last WWII Internment Camp

The Pain of Our Forefathers


Historic "Blockbuster" Store Offers Glimpse Of How Movies Were Rented In The Past
¶ Sunday, June 22, 2008 0 Comments

Even though barely anything's been up forever, people still read it and I passed 500,000 readers. Thanks!

And your faith and obvious scary fixation will be rewarded: a new online serial will start no later than the end of July. I promised this summer. I didn't say when.

Why not while the remaining time away by buying the newest (second!) issue of This Sickness, featuring Rosa & Annalisa in "Soft Ceiling," my dirtiest strip ever at AWC, in print form for the first time! Yes, if you're over 18, this is perfect summer reading for you. Very filthy, very funny. Tell your friends!
THIS SICKNESS #2 (Buy Online. NOW.) 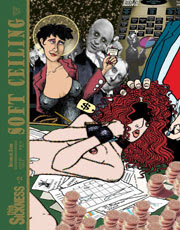 Something Weird: "My Tale Is Hot"

Lords of Acid: "I Sit On Acid" Live

Oh, and it seems that rumors of a heterosexual AIDS epidemic in the West were, well, exaggerated.

My godforsaken adolescence (18 in 1987, so just think) curses this lie, but at the same time, had AIDS always been thought exclusively a disease of what mainstream society thinks of as fringe, foreign, and even immoral and unhygenic--but "other" and presumably corruptive in any event, whatever the era's rationale was--then would anything have been done about it?

No, it wouldn't have. And I have a number of gay friends who now are thought of as ordinary neighbors and co-workers to the straight people around them, some living in rural, even Southern communities. This is not the South I remember. AIDS forced society to accept gays over time.

And also, AIDS, far from stopping people from fucking, actually gave people license to, and education about it. You can't just know you're supposed to use condoms. You're also to know when it's appropriate and when not. And how. That implies knowing a number of things that, in earlier days, would have been thought of by most as out of the ordinary. Now, we live in a time where my recent work is tame enough to be considered satire (if weak, admittedly) than smut.

To increase AIDS awareness it was necessary to educate everyone on what people really did or didn't do in bed. And as we now could tell ourselves that if we did X, Y and lubricate with Z, we could do pretty much everything that, in an earlier age when sex was more mysterious, if done might have been a lot more clumsy. And infrequent.

So was it a destructive lie? I'm not sure. Can a lie be constructive? I think of what Ozymandias does at the end of WATCHMEN. Can people only grow up and get their priorities straight when in terror? I'd like to think not.
¶ Saturday, June 21, 2008 0 Comments

One thing they both have in common is the look about them of someone you really shouldn't have slept with, but you were drunker than ever before or since that night.

That got your attention, didn't it? By way of Andrew Sullivan: Here.

In Honor of Father's Day

At least the only way I can honor it: Gifts for bad dads!

To The Women Who Plan To Give McCain the Spite Vote

Although I don't really believe there could be that many women(or gay men, from the looks of some news reports) so petty, spiteful and stupid that they'd actually vote for McCain out of spite--for those of you that might, have a look at Frank Rich today. Just to remind you how fucking stupid that'd be.

Ten years ago John McCain had to apologize for regaling a Republican audience with a crude sexual joke about Hillary and Chelsea Clinton and Janet Reno. Last year he had to explain why he didn’t so much as flinch when a supporter asked him on camera, “How do we beat the bitch?” But these days Mr. McCain just loves the women.

...You’d never guess that Mr. McCain is a fierce foe of abortion rights or that he voted to terminate the federal family-planning program that provides breast-cancer screenings. You’d never know that his new campaign blogger, recruited from The Weekly Standard, had shown his genuine affection for Mrs. Clinton earlier this year by portraying her as a liar and whiner and by piling on with a locker-room jeer after she’d been called a monster. “Tell us something we don’t know,” he wrote.

Want to give up all your rights in protest against Hillary not getting the nomination? Well, if you want to act like little girls, I guess you'll deserve being treated like same.

No, seriously, Bill O'Reilly really didn't call his new memoir "A Bold Fresh Piece of Humanity," did he?

I can't wait to see Colbert pretend to resist this one.

Watching Colbert's examination of the conservative hysteria over the Obamas' brief fist-bump makes me think of something:

How America has been since 9/11 is proof of how little fear it takes to make us able to enjoy being stupid.

Humans Are So Neat

Although given its size, I wonder how she could help it.

She is now not going to be the candidate. We knew this already, but now she does too.

So after months of undermining and attacking Obama, what does she do? Say she'd like to be VP.

But no, she and her husband have proven that they don't belong anywhere near national leadership now, and I hope Obama isn't stupid enough to let them back in. Especially given that I think Hillary is desperate enough to be president that she would arrange for his removal. After all, she's very good at waxing eloquent about fallen national martyrs. And such a legacy she'd have to uphold! The first black president. Why, she'd morph right into LBJ before you know it. In every way. Except perhaps the helping-the-poor part.

These are the people that hung Gore out to dry in 2000. The ones who did nothing about Bush except help him. Oh, and Bill's been fucking Gina Gershon as well.

Are you nostalgic yet? No?

Enough. The old Democratic party has shown what they are interested in: holding office and doing not one goddamn useful thing with it. Say goodbye to Billary.

The Clintons In The Manger

They're rallying their supporters to disrupt the convention. God, they're really making sure that, once they lose this, we will never want them back again. How did Bill, who is most definitely pushing this, get this stupid, or is he doing this on purpose?

Some Aesop, that might shed some light on the true nature of this:

A Dog looking out for its afternoon nap jumped into the Manger of an Ox and lay there cosily upon the straw. But soon the Ox, returning from its afternoon work, came up to the Manger and wanted to eat some of the straw. The Dog in a rage, being awakened from its slumber, stood up and barked at the Ox, and whenever it came near attempted to bite it. At last the Ox had to give up the hope of getting at the straw, and went away muttering:

"Ah, people often grudge others what they cannot enjoy themselves."