I Didn't Write That!
30 April 2008
You May Wonder What You Have To Agree To In Order To Become A Scientologist

That's right, someone at Fox is so very dumb that they thought Lincoln had held legendary presidential debates against a black abolitionist leader.

Although--what can you expect from Fox & Friends anyway...

As the ice grows sparser, the pollutants it's trapped have come loose. More here.

But in China, so I guess nobody minds. 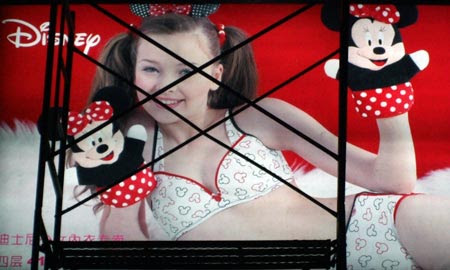 28 April 2008
That's Not Nudity Dept.
Being on the young end of "old", I have little idea who Miley Cyrus is except that she represents Billy Ray Cyrus' attempt to count for something, but coming across this item at Huffpost, I have to ask:

You call this topless? 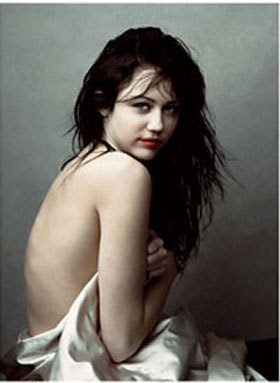 If so, I guess my question is then, is Miley Cyrus a fundamentalist Muslim, or have we gone back to 1900 and, if so, how are you reading this? Into love and out again,
Thus I went, and thus I go.
Spare your voice, and hold your pen--
Well and bitterly I know
All the songs were ever sung,
All the words were ever said;
Could it be, when I was young,
Some one dropped me on my head?

That would be indicted criminal Tony Rezko, Chicago's own Jack Abramoff. (It takes quite a crook to stand out as particularly corrupt in that pesthole) He worked with "a top Illinois Republican"(my first thought is Dennis Hastert) to attempt to have Chicago U.S. District Attorney Patrick Fitzgerald removed from his post.

This would be the same Fitzgerald that later sent Cheney flunky Scooter Libby to jail(only not, because Bush shamelessly pardoned him). And it would appear it's because Fitzgerald subpoenaed Rove.

That's all pretty wrong. And Rove will still get away with it, as he has everything.

But that Rezko--friends with Barack Obama and Karl Rove. He certainly does get around, doesn't he?

Baltar becomes Jesus! Unfortunately, too late to bring Callie back from the dead.

It's become a bit of a cliche that the current generation of young women have serious conflicts with the boomer generation of second-wave feminists, in that this generation has little in common with them. Partly thanks to the previous generation's struggles, this generation does not have to assume sexism will stand in their way of leading their lives more or less how they choose(at least as much as any of us get to do, which isn't much).

And the boomer generation cannot stand that, which illustrates the point that those who destroy a model of society are usually not the best judges of how to rebuild. The boomer generation is not content to realize that, where it counts, victory was gained and, though not perfect by a long shot, society has fundamentally changed in its attitudes toward women. The younger generation takes the rights they have for granted. And the irony of all this is that this is the best sign that the second wave got what it wanted: when those rights are assumed, and the thought they might not exist is not a thinkable one.

But that's not really what the second generation wanted. They also want constant recognition for what they did, and constant gratitude. And for the younger generation to forever follow their guidance and accept their greater wisdom. And this is never not the case with elders in any situation. Too old to be a sisterhood anymore, they now want to be a motherhood.

The second generation, like anyone--but especially in a generation as self-obsessed and insufferably convinced of their own godhood as the boomers--does not want to now seem irrelevant, or admit their time is past. This is popping out now in their scolding of younger women for backing Barack Obama rather than Hillary Clinton, and the presumed reasons why so are laid out well in this Slate piece by Linda Hirshman, which dismisses female Obama supporters as simply trying to get back at their mothers.

Isn't it amazing how many different ways dismissal of women's opinions can manifest? When women first got the vote, the assumption was that they'd vote for the best-looking candidate(although, as it turns out, according to accounts at the time, they did; but what kind of time must it have been when Harding was considered the sex symbol in the race?). And who would know better than a second-wave feminist how easily you can manipulate women by making them doubt their own ability to make judgments? Only this time it isn't because they're women--it's because they're younger women. Mommy wants her president; do what she says.

Which in turn has touched off this rather heated discussion in their forum, the Fray.

I find myself, unsurprisingly, on the younger side of this. Especially when the points seem to be these:

Younger: I can vote for who I want to, and there are a lot of reasons not to vote for Hillary.
Older: You ungrateful little airhead. We earned this, and you'd better not take it away from us.

I realize that, as one advances in age, the urgency and impatience to see one's goals finalized increases. But are the older feminists actually this clueless? Hillary has run a hideous campaign, and if this is how she does against fellow Democrats, can you imagine how she'd fare against the Republicans, who have been arming against her specifically for more than a decade? As many have pointed out, she's only where she is because of who her husband is. I have my doubts about Obama, but in my mind, Hillary's the one with an almost assured chance of losing.

But for the Motherhood, this would be a noble loss, as it would then be the Republicans' fault, not as traceably theirs.

I'm sitting here at my desk and looking out my window in Seattle. I left Chicago partly to get away from snow. And what do I see when I look outside right now?

Fucking snow. With the sun shining. 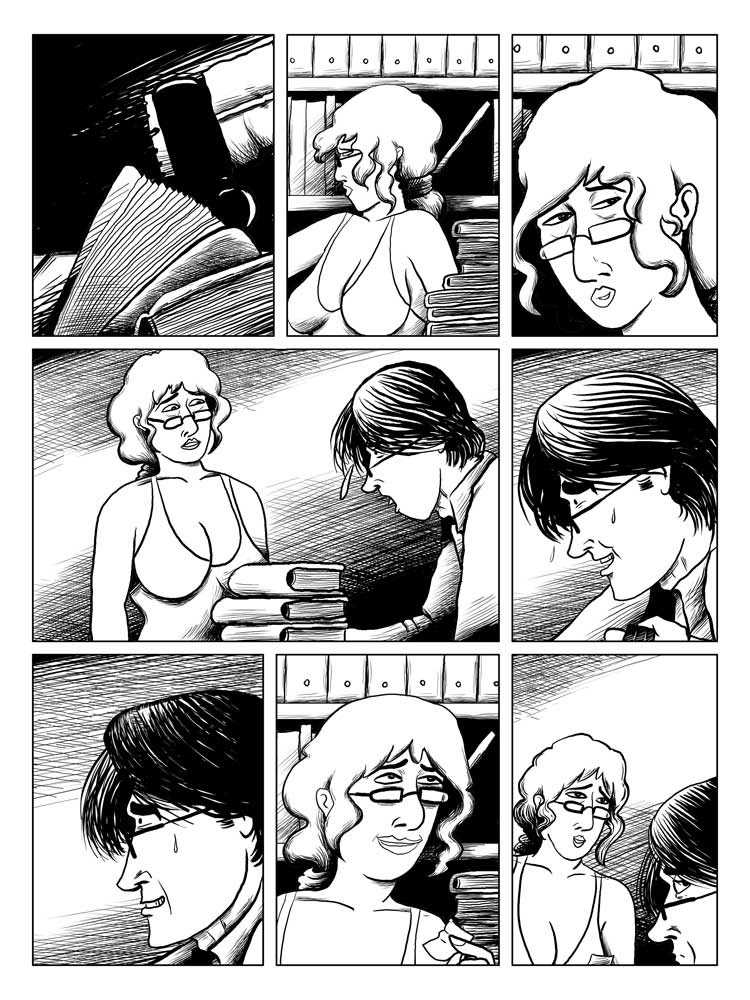 My Opinion of Tonight's Pathetic Debate

If this country does not suffer a true and precipitous collapse ending in a Strong Man taking power sometime in the next 12-24 months, I will be pleasantly surprised, but surprised all the same.

By the way, both promised to lower taxes and get us immediately out of Iraq. Someone will have to live up to that.

But the past two weeks have convinced me that whichever comes out of this, it's entirely possible that either could be incompetent enough to lose to McCain. Hillary is more vulnerable, but it's now thinkable for either candidate. I find this depressing.

My Favorite Comedian Ever

A rather disturbing and hilarious ad campaign.

In his 1992 Senate bid, McCain was joined on the campaign trail by his wife, Cindy, as well as campaign aide Doug Cole and consultant Wes Gullett. At one point, Cindy playfully twirled McCain's hair and said, "You're getting a little thin up there." McCain's face reddened, and he responded, "At least I don't plaster on the makeup like a trollop, you cunt."

"[Obama] posed for report pictures with the staff when he apparently felt his phone start to vibrate in his pocket on his right thigh - against which one woman was closely pressed.


"Now that's my phone buzzing there," he said, drawing a laugh. "I don't want you to think I'm getting fresh or anything."

Cartman becomes a teacher in an inner city school, and Mr. Garrison really wants his penis back.

Ouch, Hillary. That Must Smart.

Look, it's cute, this Quixotic obsession of yours with the presidency. But you still have business concerns after you lose, so what's this here all about?

WASHINGTON, April 5 (Reuters) - An angry Colombia said on Saturday it had ended a contract with a lobbying firm headed by a top campaign aide to Democratic presidential candidate Hillary Clinton after he apologized for meeting with Colombian officials to advocate a trade deal she opposes.

It's rare that I've seen such an inept campaign simply against a member of one's own party. So think how she'd fare once she's against the Republican. One who's an otherwise weak candidate, even.

Charlton Heston Should Not Die

But sadly, he did, at the age of 84. And I'll miss him. Regardless of his politics, I always liked him. He was a certain type of heroic leading man they do not make anymore.

And anyway, his politics were a little weird if you look at his career late 60s to mid-70s, when he did all the socially-conscious dystopian films we know him for best. Planet of the Apes is an ultimately nihilistic anti-nuclear protest. (If you think about it all the way to the end of the second film, there's rarely ever been as bleak a future in film) Soylent Green is an environmentalist screed, and possibly the first film to mention the Greenhouse Effect. (Compare SG to Children of Men and you'll understand how good SG really was, and how much it inspired the latter)
And the Omega Man--well. Charlton Heston in the last movie theatre on earth, alone every day, watching Woodstock. Mocking the hippies, sure, but maybe also nostalgic for that innocence.

Also falling in love with a strong and independent black leading lady.

And these were done at a time Heston was able to do the films he wanted. So things aren't so cut-and-dried.

Found at Hulu.com. Which I'm glad of. I had gotten really sick of having to search Dailymotion every time there's a new one.

I wonder why it took the big guys so long to realize the only reason people were making these available illegally was because the corporations weren't making it available legally.

Speaking of which, that's what the new South Park(here) is about.

A Few Reasons To Check Out the "New Frontier" Film

Three brilliant pieces of voice casting: Kyle MacLachlan as Superman, Six Feet Under's Jeremy Sisto as Batman(his voice's lack of affect or empathy is well-suited to Bats; incidentally, he was once the kid in the "We're Not Gonna Take It" video), and Lucy Lawless as Wonder Woman. And I don't know why anyone didn't think of these before.

That's right, This Sickness #1, featuring Story of OH! in its entirety, is now available as a real comic book through Cafepress.

Which is the first print edition from Bottomless Studio since 2001.

So all those folks who said you'd buy it if it were available in print? Now you can! (and send this link to your friends)