I Didn't Write That!
10 January 2007
Impeach Him. Now.
Because he will keep doing this until every last available person is dead. 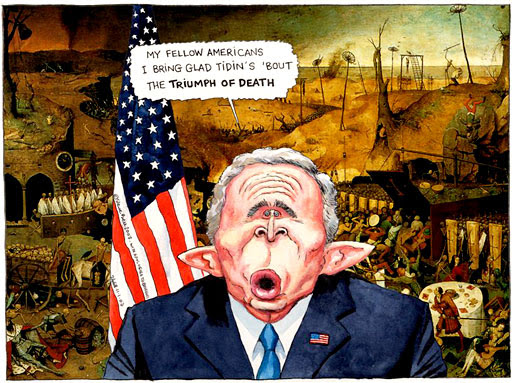 Comments:
Well, our chance to convince Nancy Pelosi to Impeach Bush/Cheney is this Monday Jan. 15th..

Pelosi most likely said impeachment was "off the table" to remove any appearance of conflict-of-interest that would arise if she were thrust into the presidency as a result of the coming impeachment.

What we need to do is to pressure Pelosi not to interfere with impeachment maneuverings within her party. Sending her Do-It-Yourself impeachments legitimizes her when she is forced to join the impeachment movement in the future.

Sacks and sacks of mail are about to arrive in Nancy Pelosi's office initiating impeachment via the House of Representative's own rules this Monday January 15th. This legal document is as binding as if a State or if the House itself passed the impeachment resolution (H.R. 635).

There's a little known and rarely used clause of the "Jefferson Manual" in the rules for the House of Representatives which sets forth the various ways in which a president can be impeached. Only the House Judiciary Committee puts together the Articles of Impeachment, but before that happens, someone has to initiate the process.That's where we come in. In addition to a House Resolution (635), or the State-by-State method, one of the ways to get impeachment going is for individual citizens like you and me to submit a memorial. ImpeachforPeace.org has created a new memorial based on one which was successful in impeaching a federal official in the past. You can find it on their website as a PDF.

You can initiate the impeachment process and simultaneously help to convince Pelosi to follow through with the process. Do-It-Yourself by downloading the memorial, filling in the relevant information (your name, state, etc.), and sending it in. Be a part of history.