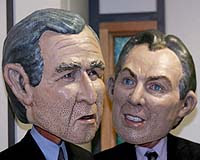 Though Bush seems to have nothing but pigs and babies on his mind in the midst of Armageddon in Lebanon, an open mike at the G8 conference caught him talking with Tony Blair, in a much more candid mood. I quote:

Bush replied: "See, the irony is what they need to do is get Syria to get Hizbollah to stop doing this shit and it's over."

Watch (or listen) as Bush delivers these crucial words without pausing to finish chewing!

So we certainly know now that this is happening with, at the very least, the tacit support of the U.S., despite what Tony Snowjob would have us believe. And as far as their relations with Syria, did Lebanon not recently eject Syrian troops from its country? And what does that tell you about any influence they may have on Syrian decisions now? Has Bush kept up? Or can he not tell the countries apart?

Are we at all sure the Lebanese government have any means of stopping Hezbollah, or is Israel just throwing more civilians into its arms and creating even more terrorists--at least of those people that will be left once Israel bombs it back to the Cenozoic? 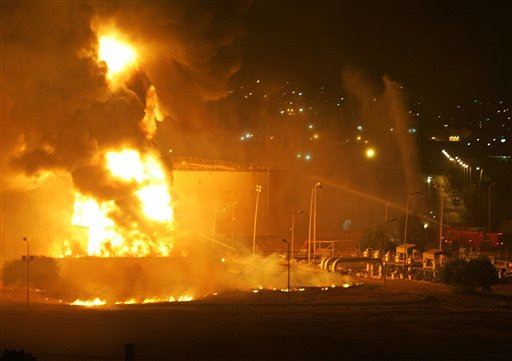 Dr. Yousef Akkash is a French-educated surgeon and Adel's brother. It is his job to oversee the funeral, as his father is too distraught to do so. He enters the basement of a mosque near the family home and joins two doctors whose job it is to separate out body parts and try to figure out which part should go in which grave. It's extremely messy. Finally, with a cleric's approval, they decide to put the 12 mangled corpses into six graves.

Dr. Adel claims to not know if his brother really was a Hezbollah official but says he hopes it's true, "so there can be some reason behind this tragedy."

He's upset and angry but can still talk of peace with the people who did this. "All people want peace," he tells me in English. "As do the people of Lebanon, but we need justice amid this occupation. We want peace and justice for all people, Muslim and Christian, Arab and Jew."

But in the makeshift morgue he holds up part of a baby's body and asks the recoiling reporters to come closer.

"Come see the arms and weapons my brother had," he says, holding up a tiny arm. "Here is your 'terrorist.'"

...A man named Tahir Ahmed asks me where I am from. When I tell him, without a trace of hostility he asks me to "tell the American people we are thankful for your country because it gives weapons to Israel that are used to kill our children."

Now who do you think will get the revenge later for what Israel is doing now over a couple of captured soldiers? (As though that were anything but a pretext; what do people think this is, Saving Matt Damon?)

From any number of angles, this action, and our support of it, smells like a horrible mistake, and not just for the obvious reasons. We will most definitely see.

But at the same time, this seems to also be opening up a rift in the Arab world.

Meanwhile, the General lets us know how the compassionate conservatives are reacting to this (mostly at Free Republic):

...We need to make the bomblets that are packed into standard Cluster bombs smaller. No need to be wasteful. The environment and all that...

...Not all Muslims are terrorists, but all terrorists are Muslim...