From the New York Post (both text and pic)

VEEP ASLEEP: Vice President Dick Cheney gets caught napping yesterday as Defense secretary Donald Rumsfeld and other White House aides leave a press briefing by President Bush and Chinese leader Hu Jintao. The veep's people later insisted he was reading his notes, but if you ask us, it sure looks as if he's dreaming of quail hunting - and maybe bagging some birds this time.
Photo: Getty

Fox News, the voice of the GOP itself, puts Bush's approval now at 33%. Spin that, Bushies.

It's a death spiral, but apparently a very, very long and slow one.

My new roommate of only one month had cops throw me out of my home last night. This bastard, whose agenda--according to my landlord--has been all along to snake me out of a place I've lived in for two years, went to a judge and lied his way into an "order of protection." And I was thrown out, without any more than the clothes on my back. Which I'm still wearing.
It amazes me that a law created to help victims of abuse can be, well, so easily abused. I didn't realize you can just make things up and, just like that, steal someone's home.
I'm baffled; this is surreal; but in any case, now I'm homeless, and not sure how I'm going to handle having lost all I have created for the past twenty years. Which I assume will happen, given I cannot afford a lawyer. But so much for good karma from editing Working for the Man, I guess. Ha ha.
Blogging and comics may be very light for a while. My apologies to all twelve of you.

A Pajiba review of a movie about 9/11 that you can download free here. Worth checking out, however doubtful the veracity, because it actually has a number of good points. The upshot? Bush orchestrated 9/11.

The Spin of Heads Rolling

Scott McClellan is leaving the White House, part of an exodus that has many more to come--though, unsurprisingly, not the most dangerous of the whole lot of incompetents, Donald Rumsfeld.

When asked by the press about it, though, reflex held, and he swore to hold his breath till he turned blue. 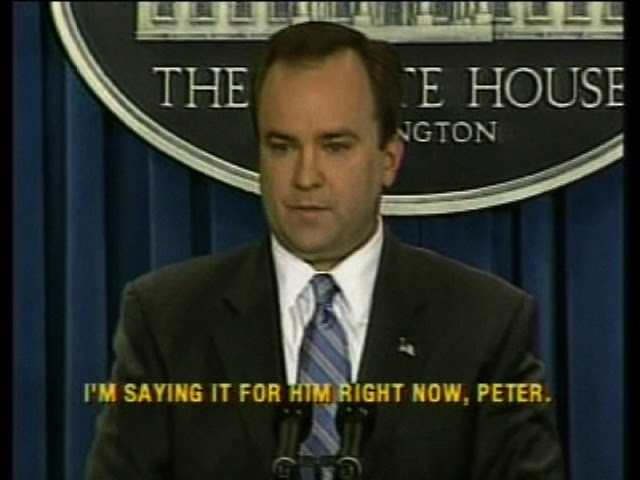 Governor George Ryan, one of the most corrupt governors ever, has just been convicted by Patrick Fitzgerald.

When asked for comment, the governor could only sputter, "I'll pay someone to run you all over with a truck, you cocksuckers!"

Or three new pages, at least. Enjoy. Though that may be an odd choice of words in this instance...

Keep watching for announcements of some other exciting new projects. And so forth; you know the drill...

Berlusconi is no longer head of Italy. One less mogul in charge of the world!

Bush's job ratings continue to drop. (Remember when a low of 60 percent for Clinton during the Lewinsky investigation was considered catastrophic? Ah, the innocent 90s) Of course, by now we know that makes no difference...or does it?

As bad as Bush's numbers may be, Congress' are worse.

Just 30 percent of the public approves of the GOP-led Congress' job performance, and Republicans seem to be shouldering the blame.

"These numbers are scary. We've lost every advantage we've ever had," GOP pollster Tony Fabrizio said. "The good news is Democrats don't have much of a plan. The bad news is they may not need one."

And Congress, not Bush, is up for election this year.

I swear, if you can't trust gossip columnists anymore, whom can you trust?

06 April 2006
I Knew This Without An Expensive Study

Message: if there is a God, he really hates being pestered.

And following on the heels of yesterday's tale of the son of a Republican state senator who likes shoving broomsticks up little boys' asses, we have yet another in the GOP, this one the deputy press secretary of the Department of Homeland Security, who has been caught by an undercover officer of the FBI that he thought was a 14-year-old-girl. Said fictional child our sicko Republican was trying to seduce.

Again: why is it when you hear of this happening, whether it's homophobic officials who turn out to be gay, or Pro-lifers who are proud they fucked farm animals(and think that's more moral than homosexuality), or even operatives of the administration who turn out to be male prostitutes, it's always Republicans?

All the way back at least to Roy Cohn, who proposed putting homosexuals with AIDS in camps and then died(and in great suffering, and I will say he's the only person who ever deserved that kind of death) of the disease itself, Republican hypocrisy on moral matters is consistently breathtaking. But it fits. Republicans always project upon their enemies precisely their own nature, and this is no exception. I suppose they might think that if they fight, say, gay rights, that God will look the other way on their own gayness. (by their own lights, mind you, which is to say they think and declare being gay sends you to Hell; myself, I care neither about Hell, homosexuality nor God) But one wonders how they justify the farm animals and children.

One has to remember that theirs is a minority culture with its own strange mores, without much connection to mainstream humanity. They come from a socially retarded and backward point of view that, for instance, values the life of some dead woman in Florida over those of thousands upon thousands of live men and women in Iraq, or is willing to stop a vaccine that can save women from cervical cancer on the grounds that it's better that women should die than to have sex, or thinks getting prayer in school is more important than getting competent teachers first.

We ought to pity them. They're stuck in a dead century that never really existed. They're terrified of everything that most of us treat as normal modern life, and this twists them into shapes those of us who have matured properly simply cannot imagine. All they can think of is the sin they imagine around them, so of course it makes sense that they'd embrace what is often the very worst of it--they know nothing else and impute all good and positive qualities to a god that doesn't exist. (Even if there is a God, he cannot be the fundamentalist's god) They leave themselves with none and, rather than taking responsibility for their own behavior, they wait lazily for "God's grace" to do their moral heavy lifting for them. It must therefore be a relief to them that it never arrives--well, except once they're caught and need redemption.

Right-wing Republican Christians are, for the most part, moral welfare queens, dependent on an imaginary enabler, that cannot stand on their own two feet. It's sad to see what dependence on church can do to the spine.

But that's their business. The important thing is to recognize their incapability, though, of leading pretty much anything, and to get them away from the reins of government and back to their farms where their world makes sense, and old Bessie is still pining for their touch, and they can smell the reasssuring scent of manure on their galoshes. This November, help do what you can to take the pressure off the poor Republicans and remove them from office for their own good. So much responsibility, so much water over their heads; how could they help but drown? 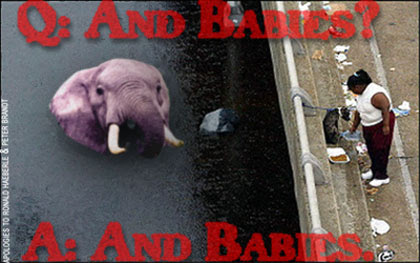 I thought all that religion might have made them more moral! Write Mr. Bennett and ask him, if you're as confused as I.

Two thought-provoking pieces explaining that, unlike Iraq, we might actually get seriously fucked up should Bush's approval ratings go low enough to induce him to attack Iran. Plus some info on a very spooky, related Israeli plan.

"You Can Play The Blame Game All You Like..."

Well, if you're going to give us permission, Scott, why sure!

A rather caustic and castrating profile of (possibly outgoing?) press secretary Scott McClellan from Vanity Fair.

Actually, that's half inaccurate. For it to be castrating, McClennan would need to still have his balls.

Life Is Skittles and Life Is Beer

I think the loveliest time of the year is Spring. Don't you?