I Didn't Write That!
15 August 2005
Texan Presidents, Yesterday and Today

Lyndon Baines Johnson in 1968 as our soldiers were being slaughtered in Vietnam because of stupid decisions he made and approved.

George W. Bush as our soldiers are being slaughtered in Iraq because of stupid decisions he made and approved. 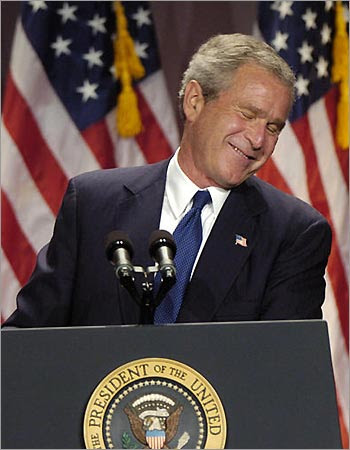 The other thing that's starting to break through is the president's cluelessness and callousness, his tin ear when it comes to the war and to Cindy Sheehan's appeal. Bush is such a polarizing force in American politics that it's hard to objectively describe either his personal political assets or his flaws. Most of his opponents can't even imagine his appeal to his supporters – the regular Texan, the man's man, the guy you'd prefer to have a beer with over John Kerry -- and of course his admirers can't see what enrages his detractors, the smirking shiftless bully behind the regular-guy veneer.

Maybe it's just wishful thinking, but it felt to me as if with Bush's latest remarks about Sheehan over the weekend, the clownish lightweight his critics know and despise was beginning to shine through for all to see. If you haven't already, take a moment to ponder what he told Cox News about why he could find time for a bike ride on Saturday but not to meet with Sheehan:

"I think it's important for me to be thoughtful and sensitive to those who have got something to say. But I think it's also important for me to go on with my life, to keep a balanced life ... I think the people want the president to be in a position to make good, crisp decisions and to stay healthy. And part of my being is to be outside exercising. So I'm mindful of what goes on around me. On the other hand, I'm also mindful that I've got a life to live and will do so."

You don't have to be Cindy Sheehan to think that yammering on about "staying healthy" and living a "balanced life" while so many are suffering and dying in Iraq is unthinkably cruel, as well as unbelievably politically tone deaf. When I read Bush's quote -- I read it over and over -- I found myself wondering not just about his character but his fundamental emotional health. It's as if he's confessing he couldn't stay "balanced" if he had to confront Sheehan's grief, and even worse, her questions about why her son died.